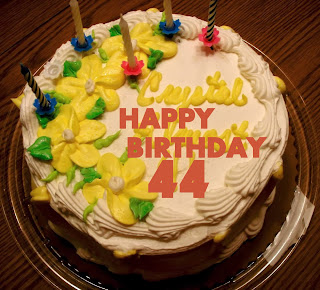 Sending the BIGGEST BIRTHDAY WISHES to our daughter-in-law! 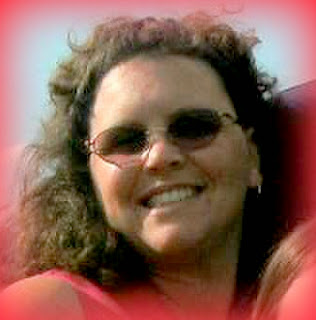 Happy Birthday to a very special lady, with all our love!

Posted by DDonald at 8:32 PM No comments:

Monday was a Travel Day

It's after 10:00 pm and I'm finally sitting down to watch the Rays/Red Sox game that I recorded earlier today.  (GO RAYS!)

.....We were both up this morning before the alarm went off at 6:30am, we filled our travel mugs with coffee and we were on the road about five after seven.

First Stop:  Tampa for a couple of doctor visits.  We arrived about 8:50 and pulled out of the parking garage of the Morsani Health Center on the USF campus about 10:45.   Made a quick stop at McDonald's in Sun City Center  to refill the coffee and Rich picked up a McDouble to hold him off for a while.

Second Stop: Wauchula - It was a quick stop to fill the gas tank and then to CVS Pharmacy and then a stop at Peace River.  Since we were headed this way we stopped at the RV to pick up a Pickleball Banner that one of the guys in the Villages wants to use for an upcoming pickleball event.

The park was pretty empty, but we noticed that they had put up a fence around the shuffleboard  area, and they were in the process of resurfacing.  The rest of the park didn't look so great.  PILES and PILES of branches that had been cut and left to be picked up later, and the grass was close to knee high.  The river was still pretty high especially in Nate and Krystal's front yard - so I snapped a couple of pictures.  Not nearly as high as last year - but then again the rainy season is no where near over. 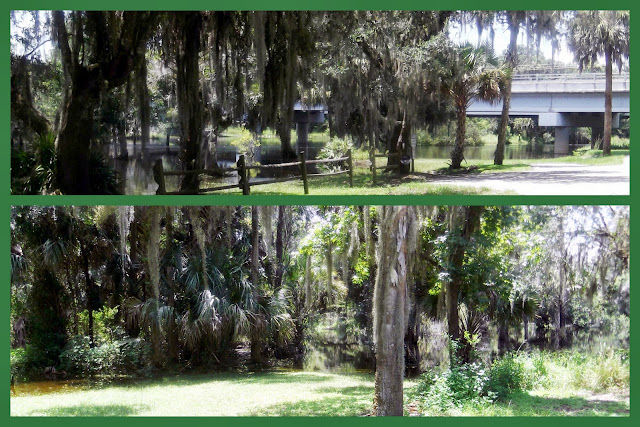 Back on the road again for Stop Three:  Adelaide Shores RV Resort in Avon Park.  One of the options we are considering is buying a Park Model and we learned of this 2006 model perfectly located on the lake's shore.   A very nice single bedroom modular home with a 13X38 combination Florida Room.    Pictures of the inside below:  The bedroom with LOTS of storage and closet space.  Kitchen with flat top range, double door refrigerator with ice maker, dishwasher etc.   There is also a washer/dryer.  Nice size living room where the bay window faces the lake.   The Florida room has a very large walk in closed and a second full bathroom, and sliding glass doors that take you to the back deck. 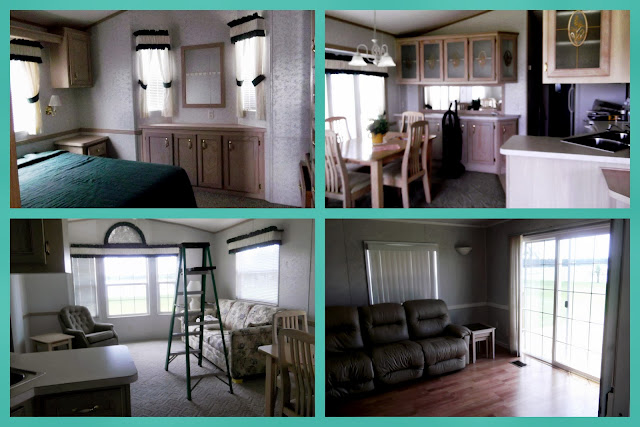 The outside pictures below:  The deck was just recently added and would be perfect with the insulated metal roof and screened in..... The view of the  lake is beautiful.  There is also a dock/slips on the lake where you can leave your boat.  We understand the fishing is very good!  The yard is nicely landscaped and well maintained. 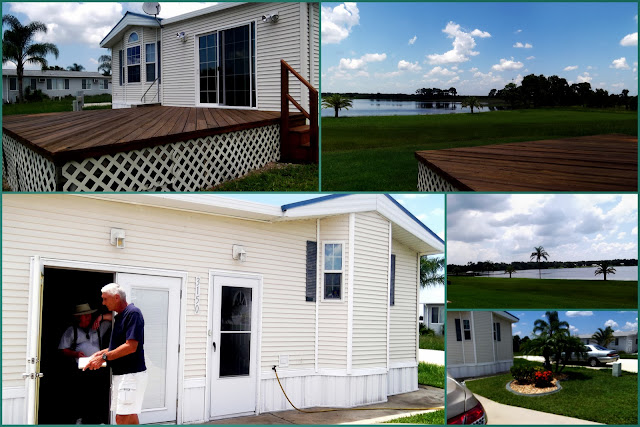 This is an over 55 community, both RV and Park Models. There is a beautiful pool with and outdoor bar, a 5,000 sq. ft. club house, covered shuffleboard, tennis courts with lines for pickleball, and tons of scheduled activities!   Even with the park quite empty for the summer it was very inviting.

Stop Four:  Well we were already in Avon Park and only about 12-15 miles from Lake Josephine in Sebring where our friends Nick and Tony have their RV parked.  After a phone call to make sure they were home, we headed down for a quick visit.  By this time it's close to 3:30.  We visited for about an hour, and they decided to join us for dinner before we headed back.    We began our trek back north hoping to arrive for dinner before it rained.    As we drove along the shores of lake Jackson the sky looked very threatening!

Stop Five:  And our last before continuing back to The Villages, was at the Hibachi Grill in Sebring one of our favorite places to eat.  It was nice see both of them and catching up on what they've been up to renovating their bus.  Hopefully they'll head up our way one weekend. 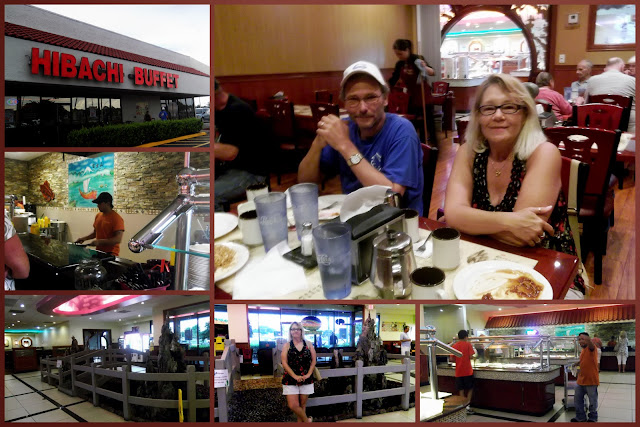 We arrived back home at The Villages about 8:35.  Thirteen hours and a half hours later.   A little different than our original plan - To the doctors office and back!

It's the top of the fourth inning and there is still no score!  Hope I can stay awake .... and hope even more that the Rays can take back first place!    Plus - I got to get rested to keep up with Krystal tomorrow!

Another fun week at The Villages 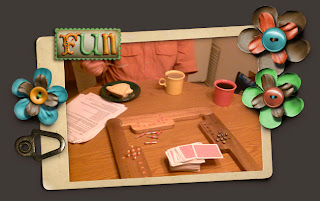 It's been nearly a week since I've updated this Blog.....so I'll begin with last Sunday.   ( And for this one I thank Krystal for her pictures!).  The four of us went to the Olive Garden for their 2 for $25 specials.  This is a great deal that includes two appetizers/ or dessert, all you can eat soup/or salad and two dinners.  The Tuscan Chicken is excellent.
After dinner we invited Nate and Krystal back to our place.   I had prepared a pumpkin cheesecake for our dessert.  Put on a pot of coffee and we had a great time playing pegs and jokers.  Not very often that I can get Rich to sit an play a game at all, but he likes this one. 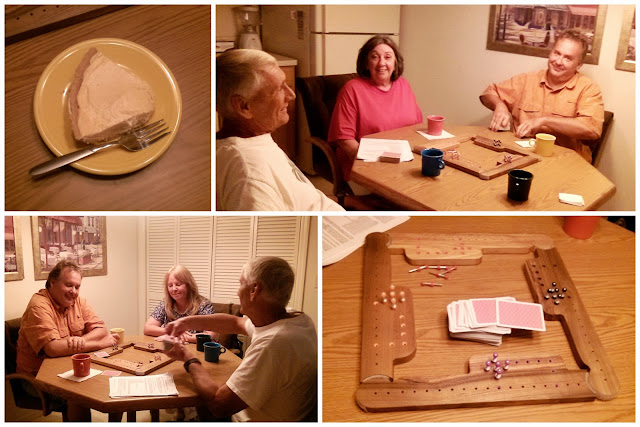 On Monday Nate and Krystal took off for Wauchula, where Krystal helped out at the Horse Sanctuary for the week.    In the meantime I played pickleball most every morning, while Rich seemed to get rained off from his play most every afternoon.   I played Bunco a couple of times, we watched a few movies after dinner a couple of nights, and the Rays baseball games as they finally made their way to the top of the American East....

In the meantime, Buddy and Diane arrived at the Three Flags RV Park in Wildwood, so we made arrangement to meet up with them today (Saturday). We just sat and talked for a while, catching up on what each had been doing since we left Peace River.  Rich took Buddy over to check out a couple of the pickleball courts and then we took both of them on a tour of The Villages. 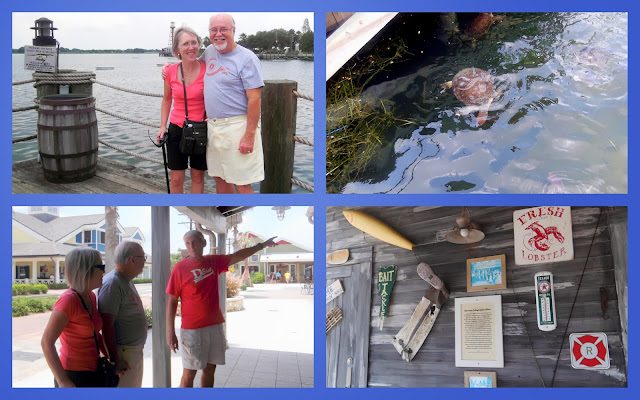 Our first stop was at Sumter Landing where we walked along the boardwalk, watched a couple people feeding the turtles, checked out some of the buildings and the town square.  From there we headed to Spanish Springs town center, showed them the golf cart bridge and drove through the oldest section of The Villages - Orange Blossom which is primarily modular homes.  Buddy found one perfectly located lakeside and just across the golf cart bridge from the pickleball courts!

Next stop was at Nate and Krystal's place to visit with them for a while before dinner.  Love this villa more and more every time we visit! 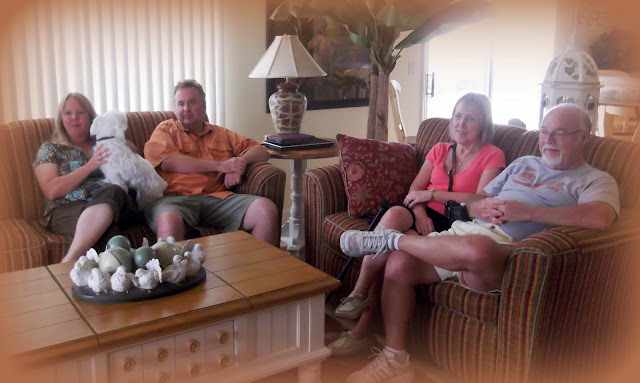 From there we headed to Wildwood where we had dinner reservations at the Cotillian Southern Cafe.  Reservation was for 4:30 but we arrived a little bit early.  The cafe closes between lunch and dinner - so we had to wait a few minutes before the doors were opened.   Below you can see Krystal and Buddy checking out the menu. 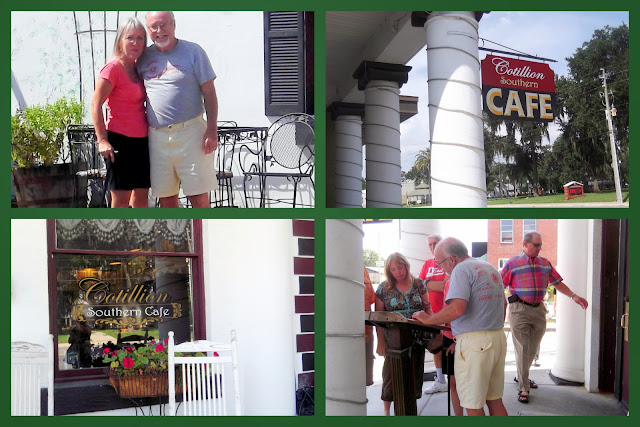 The inside is old, but very charming; with true southern decor, southern
cooking and southern hospitality.   Starting top right is:
Diane's  Crispy Baked Chicken with Macaroni and cheese,
Nate's Alabama Fried Catfish with coleslaw and their famous Georgia Ice Cream ( cheese grits),
Krystal and I both had the Texas Country Fried Chick with smashed potatoes.  Buddy selected the Southern Style Meatloaf with smashed potatoes, and
Rich the Cracker Chopped Steak smothered in onions, peppers and mushrooms and smashed potatoes.
All were served with choice of soup or salad and corn-federate corn bread with whipped cane butter. 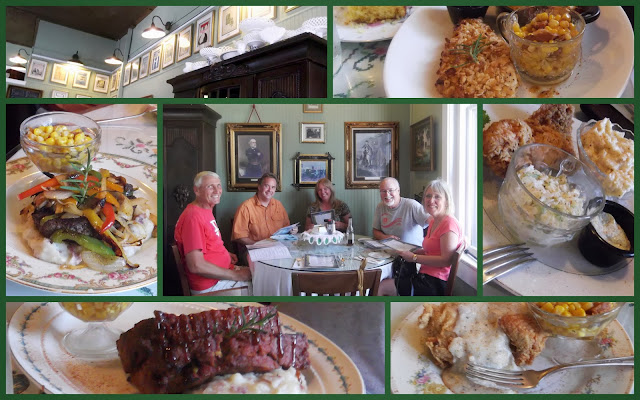 ABSOLUTELY DELICIOUS!    If you are in the Wildwood Florida are, this restaurant is a MUST!

Krystal and I headed for the Laurel Manor Rec Center this morning for Line Dancing.  Beginners start at 8:00 am and then the teacher (Jean Brewer) who trains and calls the dances from the stage, graduates the dances from beginner level to beginner plus, advanced beginner, intermediate and so on.  We have been attending for the last two or three weeks.  The picture below was taken after several of the beginner level dancers had already left.  This was about 11:00 am when we were leaving too.......  At some point during the morning there was definately somewhere between 50 and 60 dancers in the room!  What fun!

Jean will tell the group next Thursday what evening we will be meeting to dance at the town square.  Krystal and I can't wait to join the group! 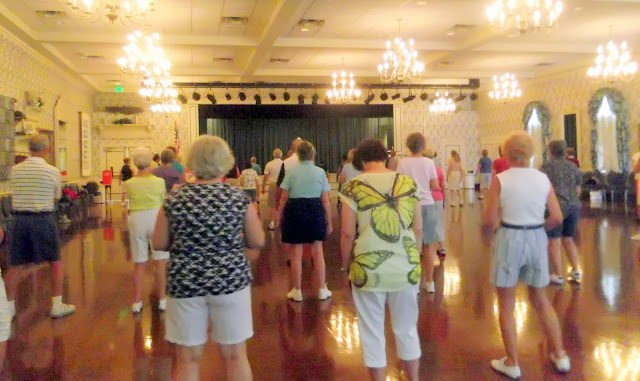 Posted by DDonald at 3:52 PM No comments:

Today was pickleball at Mulberry. And tonight was dinner with Nate and Krystal at Cody's Roadhouse located on the square at Sumter Landing.

Very enjoyable evening. Happy Hour two for one............and Fajita Dinner, buy one get one free!  We all enjoyed all of the above and it was delicious! 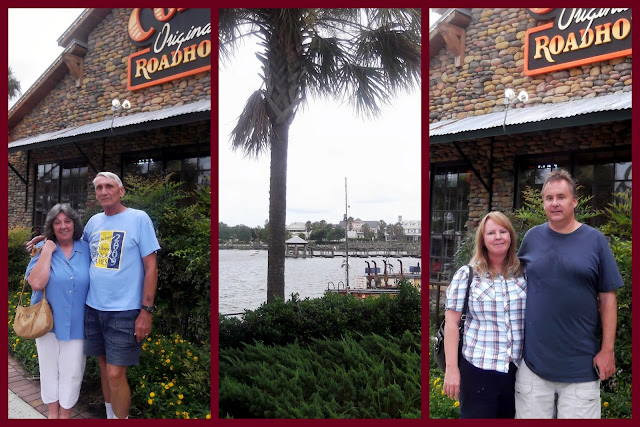 Posted by DDonald at 6:58 PM No comments:

Celebrating the 4th of July

A very special Thank You to Nate and Krystal for inviting  us to spend the day with them. Their son Arik was visiting for  the day, and their son Austin with his girlfriend/fiancee Brittany had also arrived and would be staying through the weekend.

Nate was cooking burgers on the grill and had also prepared a crock pot of pulled pork.  I made up a potato and macaroni salad and a large dish of coleslaw.  Krystal, showing off those creative skills again,  prepared white chocolate dipped strawberries and pretzels with red/white and blue sprinkles and a mock cheese cake also decorated in red, white and blue for the holiday.  Add a perfectly chilled Sangria and the day was off to a great start. 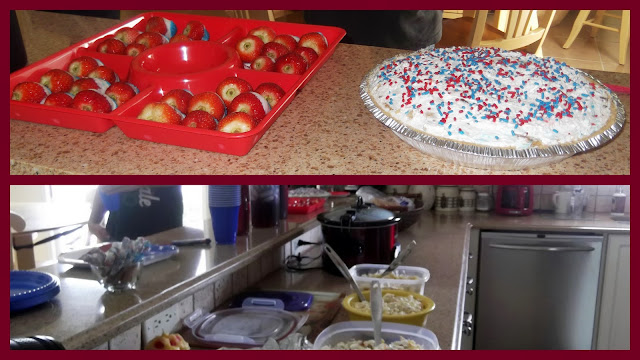 Below are a few pictures of everyone enjoying the food and good company.
Nate and Rich (either talking pickleball or the stock market!)  Austin, Arik, Nate, Krystal and Rich in the buffet line!  Nate and Ava , and my favorite picture of the day, Austin and Brittany celebrating the day with their sparklers. 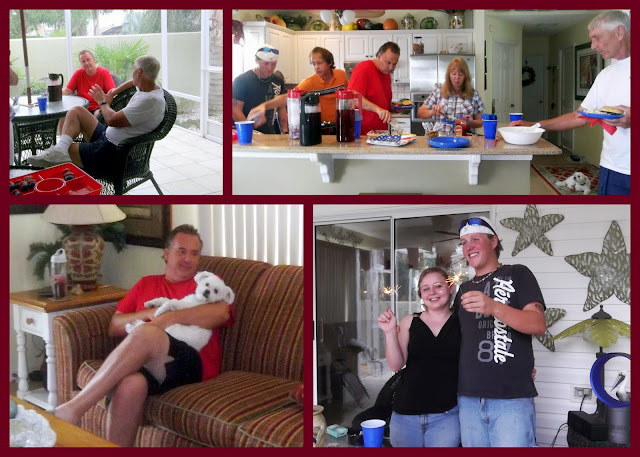 After eating we sat out on the lanai for a while and were ready to play a game of corn hole....but we changed our minds, changed into our pickleball gear and headed for the pickleball courts, nearby at the Mulberry Recreation Center.

Unfortunately, Mother Nature decided to intervene.  The sky darkened, there was thunder in the background............and before we were able to finish our second game  the sky opened up!

Below is Nate and I, Arik and Austin, Britt waiting to play and Ava , just glad she was not left at home alone......... (Thanks for sharing these pictures, Krystal) 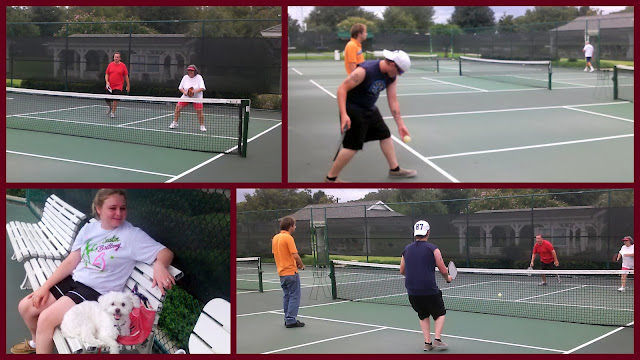 It was early evening when we headed for home after a very fun day with friends.   We hope to get Britt and Austin out to Bunco tomorrow.  And Rich and Austin hope to get together before they leave on Sunday to play some billiards.

Thanks again, Nate and Krystal for inviting us to celebrate today with your family.

Posted by DDonald at 7:45 PM No comments: