I can not believe that it has been a whole month since I've updated this Blog!  Granted, there has not been a whole lot of exciting things going on - but I can't believe how quickly the time has passed.   I think this first picture was taken way back the end of February beginning of March.... when we were having some cooler weather.  So it was time to get the White Chicken Chile Cookin'... and the Cornbread bakin'!   Tried another new recipe for Oatmeal Chocolate Peanut Butter Bars...........they were just OK. 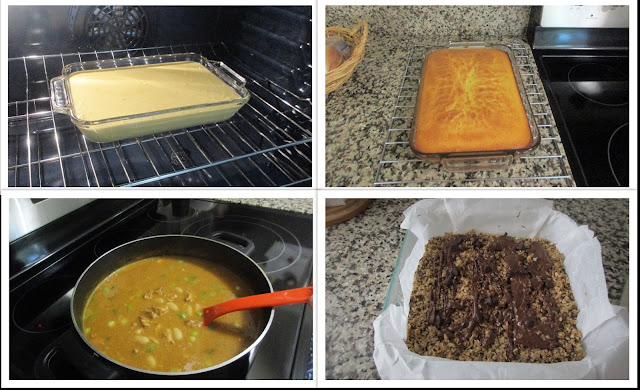 And then it was returning my glasses..... and my follow-up with the Retina Doctor..........but not before a quick visit to the optometrist - to adjust my glasses, and put me on more medication for inflammation in both eyes.  Retina doctor found the same blurriness, and inflammation and had me continue the medication for two more weeks.   Tomorrow I go back for a follow-up (eyes have improved) and to pick up my new glasses.

One cool thing though..........I think it was like March 14th when the space shuttle took off from Cape Canaveral with both American and Russian Astronauts heading for the Space Station for a 6 month stay!  Just so happened to be on the lanai that day...........grabbed the camera and got a pretty good shot of the shuttle.  No clouds so it came out pretty good! 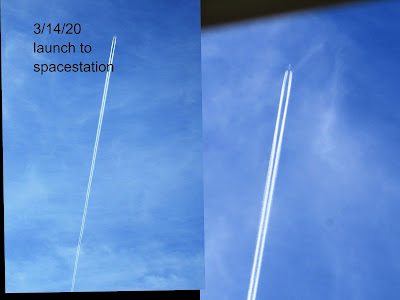 And then along came the Chinese Corona virus aka COVID-19!    I had been spending a lot of time, makings packing lists, to do lists, and booking rooms for our trip to Iowa and then to Black Lake in May.    And then we seemed to be spending a lot of time listening to the news trying to stay up-to date with  the Corona virus Pandemic.    We probably could have been better prepared, if China had not tried to hide the virus from the entire world for so long......... but we should all be grateful for the great job that our President is doing. (Can't say too much about Congress...... and all the bulls_ _t from the Democrats.  A couple of weeks ago it was all about Trump Rally's and Races for the Democratic Presidential nominee!  We've been good about not going out and about, except for groceries and medications.  Can not believe how empty the shelves are in the grocery stores... 100 times worse than people stocking up for a major hurricane!!  Fortunately I had some meat already in the freezer, because the most they would let me buy is just TWO packages of meat!!  I took one ground beef and one chicken!  And everyone by now has received our marching rules...... and what we should be doing to help prevent the future spread of the Virus. 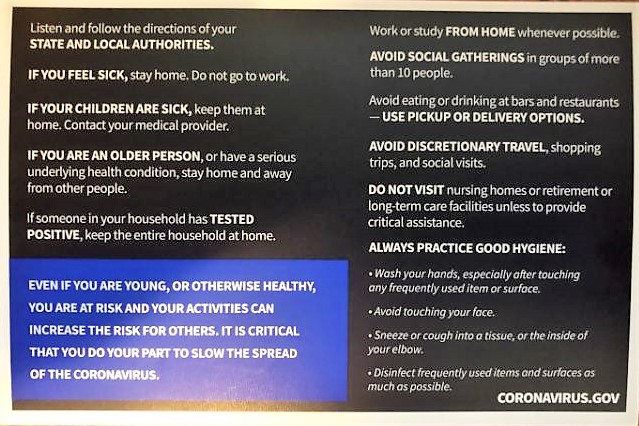 But as usual, so many people just don't pay attention............and think "it will never happen to me"  It was such a disgrace seeing college students take over the beaches  here in Florida as if they had not a care in the world except drinking, and having fun !   And states locking down gun stores, stopping arrests, and letting criminals out of prisons!  It's getting very scary - the things that are going on in Democratic led states!    I think this says it all 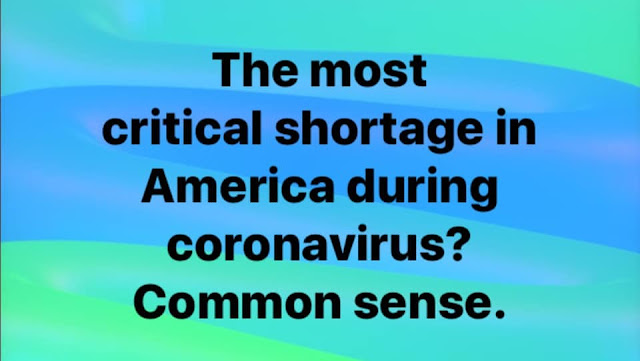 Unfortunately, we got bad news.........Graduation Ceremonies for our grandson in May at the University of Iowa have been cancelled. So we, and all the other grandparents have  cancelled our trips to Iowa  I cancelled all of our hotel reservations from Florida to Iowa, and from Iowa to NY.  Not sure what's going to happen in NY . We are still booked for our stay at the Log Cabins in Black Lake.... but we did see that one of the local campgrounds have already said they would not open before June!  With the cancellation of the graduation, we were kind of hoping we could extend our stay there for a few more weeks............but????  Here's a picture of the storefront at the Log Cabins taken just a week or so ago. 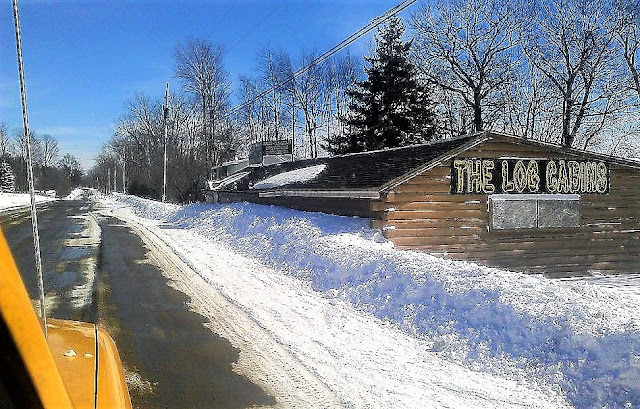 The last couple of weeks has been pretty hot...........but we did get some work done in the yard, and some of the bushes trimmed...........Rich was out the other day hosing off the boat and the dock.... and running the boat motor for a while.........since we haven't even been out on the lake once yet!!  AND  look!  we've got three pineapples started! 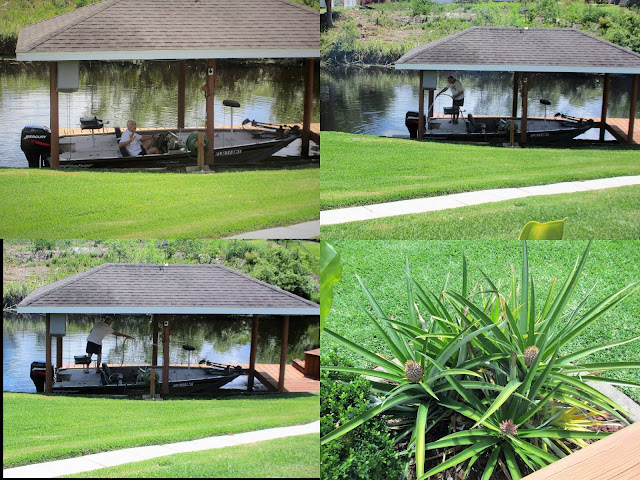 And so as we near the end of another month..........I'm back in the kitchen.....and Rich is doin' the grillin' and makin' more yeast risen bread!   Lots of cooking  Crock pot Chicken and Noodles, Shepherds Pie,  Pot Roast,  Linguine w/meat-sauce, Baked Enchiladas, Stuffed Pork chops,Chicken Fried Steak, Pizza........ and below is Rich's bread, Chicken K-Bobs with potato salad, and an excellent Crock pot Pork loin with red potatoes and carrots - that was absolutely delicious! 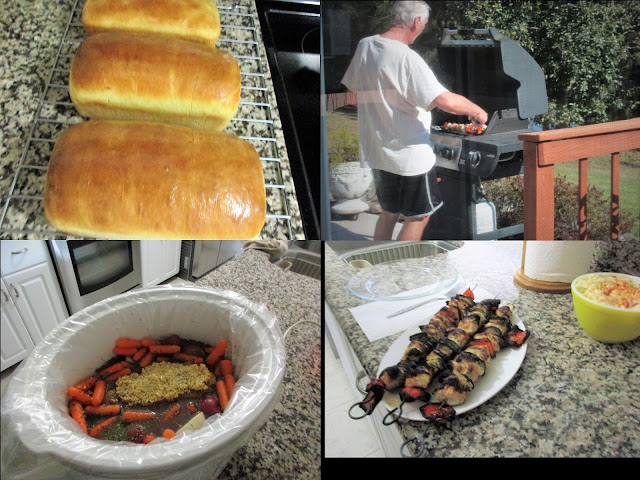 Staying in touch with family...............and everyone seems to be keeping busy, despite the "quarantine"  and  "social distancing"!   Brother Dave and his best bud, Jake the Dog..... have continued their daily hikes or trips to the dog park.......... staying close to home.  Always enjoy looking for the pictures he takes.   Below are" Falls at Robert Tremain Park, Ithaca, NY,  Canine Commons Dog Park/Binghamton, NY, and Chenango Lake, not far from Binghamton, NY. 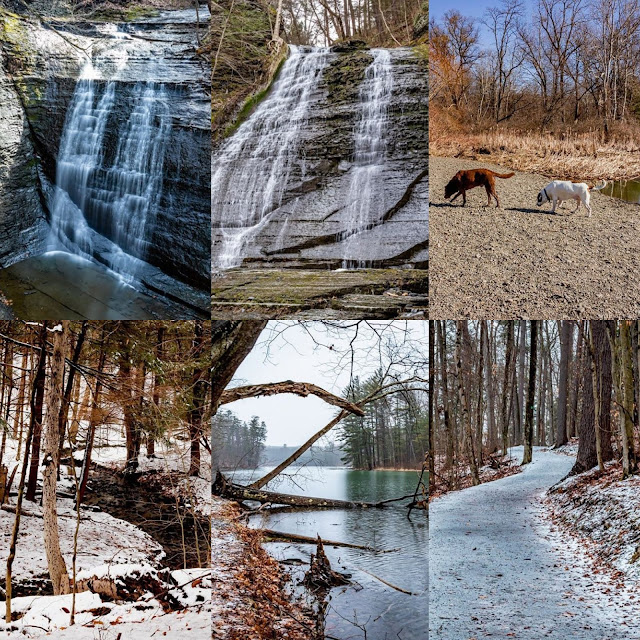 In Iowa - with the Corona Virus... Dennis is working from home a lot,  the University of Iowa is closed, and so the kids are taking classes via video, and the No Kill Shelter where Dennis and Krystal volunteer is now closed temporarily because of the virus..........but they were able to adopt out all the dogs, and  almost all the cats before they closed.   Chauna brought the two "grand-dogs" (as Dennis calls them) over for a visit..... which Dennis totally enjoyed.  Onyx and Zoey belong to Dennis & Crystal.... Chuba and Leia to Chauna and Ryan.  Top photo - Chuba and Zoey,  Bottom left,  Onyx, Zoey, Chuba and Leia,  Bottom right. three way tug o war - Chuba, Leia, and Zoey. 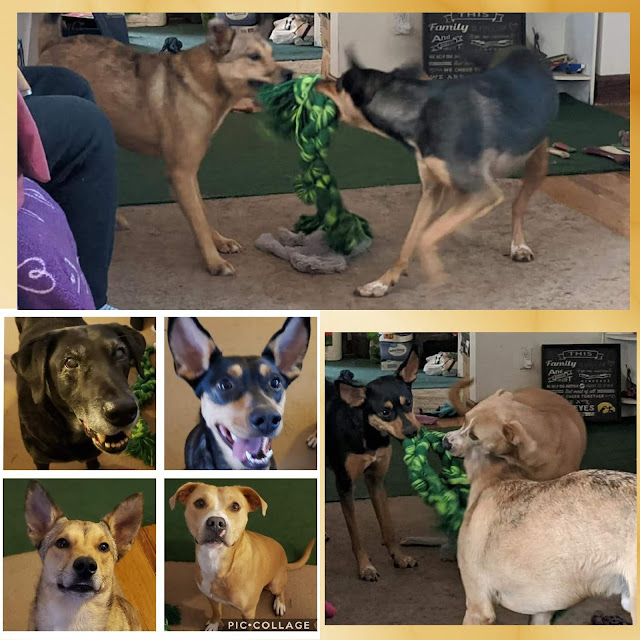 Just a short time ago, Dennis gave us a bit of a scare with the following message:   The word is out, we just had a positive test of COVID-19 at my work place.  Not a coworker, not same floor & to my knowledge, no close contact.  On the positive side, it's been 1 week.  I've always practiced good personal hygiene & precaution measures!  I feel fine with no symptoms.  Have had temperature taken 3 times in past 3 days for Dr. appt. and 2 other checks.   Also our mission is essential & I have to work for those bad mouthing people.  Other than that, be blessed & safe.  I will be teleworking from home as much as possible. 🙏

So we will keep him in our prayers that he does not test positive..... and hope you'll do the same.  Thanks!
Posted by DDonald at 9:55 PM No comments: