Christmas Day... It was just the two of us celebrating today.  But we were up just after 7:30 am, poured our first cup of morning coffee, and checked out the stockings and gifts that Santa left behind.

We agreed that it would be no big gifts this year, but we laughed as we opened gifts that we tried hard to disguise, so the other person could not guess what they were.  You know - like the toothbrushes, candy, and liquor bottles?  Yes I did get Rumchata, and wine this year, but I also got a very nice meat platter, and new wallet. Santa brought Rich some new long outdoor gloves that go to his elbows....two wall hangings for his office ( welcome to the lake, and I'd rather be fishing in the shape of boat oars... and of course his chocolate.   And then it was breakfast time - which for Rich was the remainder of pie #2! 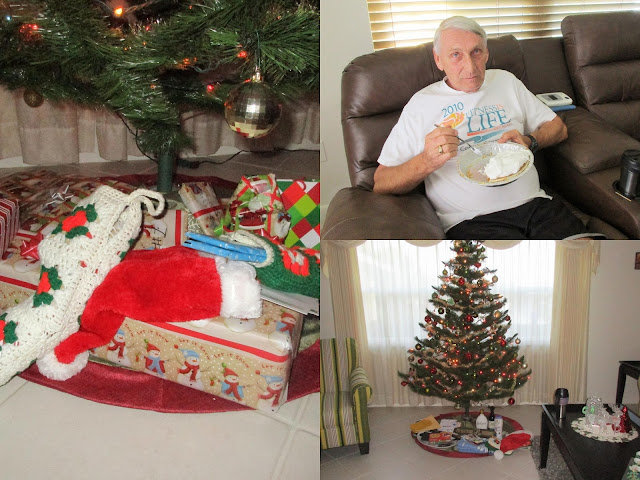 Heard from some of the family.  Rich talked to his brother Bob, Chauna messaged us, and Dennis called late morning.  And he sent us a picture of the Shadow and Venus enjoying Christmas morning.  The little yard decoration in the front of the three puppies was one of the gifts that we sent them. 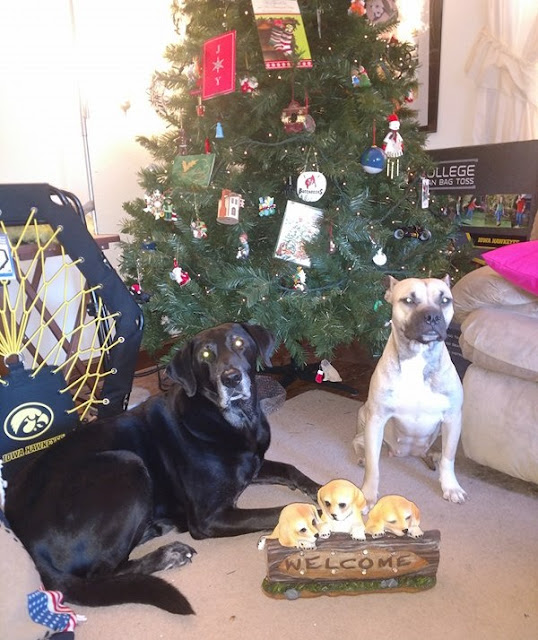 Today was a beautiful day!  We had the sliders open, and the front door open until well after dark.  And during the day one of the resident Blue Heron wandered on through the yard. 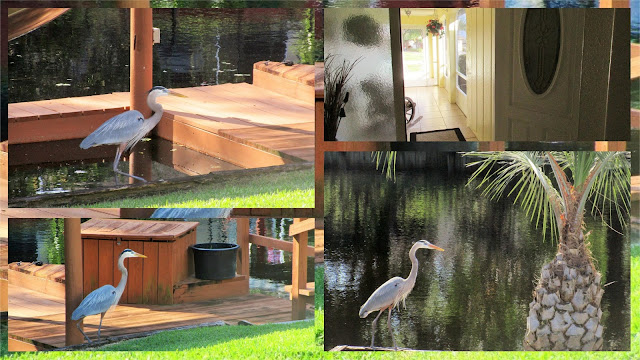 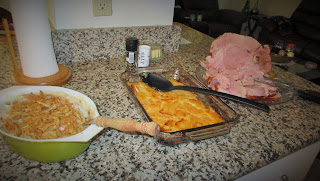 And before we knew it - we had watched a couple of movies and the day was over.   Merry Christmas!   And now we prepare for the new year!
Posted by DDonald at 10:04 PM No comments:

Well the weekend is quickly coming to an end..... Made a trip into Sebring on Friday afternoon to stop at Home Depot and pick up a couple of screen doors to replace those in the sun room.   Rich to the plastic/cardboard off only to find that we had one White, and one Bronze Screen.  Went back to Home Depot on Saturday returned the Bronze and got another white........ Took all the wrapping off on Sunday morning only to find that this one did not have the extensions, nor the black rubber piece on the one side........So, I guess we'll be back in Sebring in another day or so!!!!!

In the meantime, on Saturday we were both back in the Kitchen. With Christmas just 2 days away it was time for Rich to make his 3 Pumpkin Pies!  I had already made up 4 batches of cookies, chocolate and chocolate nut fudge, and peanut butter fudge a few days ago, and ordered some sausage cheese and cakes from Swiss Colony.  Made up some boxes and shared with neighbors.... then we enjoyed some chicken chili and cornbread for dinner 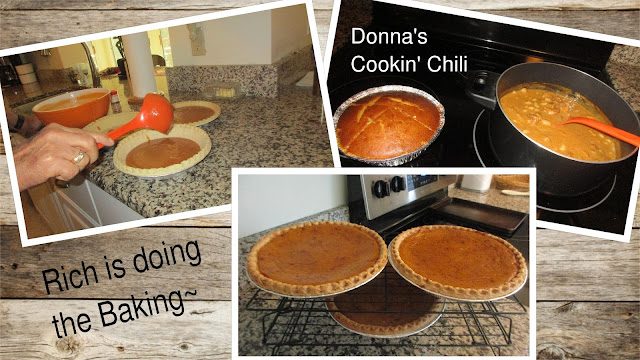 No big plans for Christmas Eve... visited with Tom and Mike for a while this afternoon and finished wrapping Christmas Presents.  Enjoyed an adult beverage before dinner.  Rich had his Eggnog with Cinnamon Whiskey, and I just took a shot of the Whiskey on the rocks!

For Christmas Eve Dinner we enjoyed Shrimp Scampi over linguine with Garlic Bread..... and pumpkin pie, of course!

And so all the presents are under the Christmas Tree.  The Stockings are out for Santa to fill during the night! 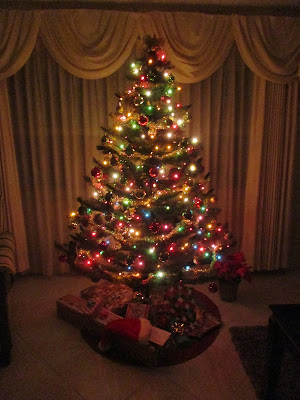 Posted by DDonald at 9:02 PM No comments:

More Baking, Getting Ready for the Holidays

Well........ the good news is that both Rich and I are feeling much much better.  The steroid shot continues, at least for now, is keeping the back in check....  Although - we did find out that a bit too much walking, a little too fast does irritate it a bit.   He has been to see the cardiologist, and so far everything appears to be OK. She did put him on blood pressure medication..and he goes back this week for an echo cardiogram...

The results of the colon (ulcers) came back good, and the medication has finally done its job.  Feeling much much better.  Just the urologist to see - but that's not until February. 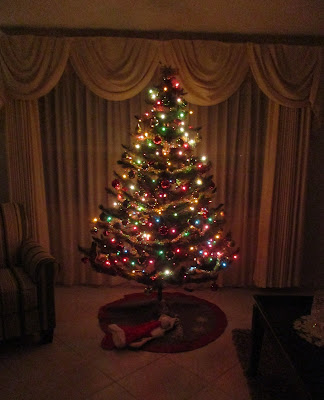 Getting into the Christmas spirit now. Rich makes sure the lights on the tree are on every night. Got the Christmas music playing.... Been making lots of cookies and fudge and pumpkin bread.... and Rich will be back to making his pumpkin pies next weekend.

Rich has been enjoying the eggnog with a shot of cinnamon whiskey a few times this past week.  Have not had any myself.........not even a glass of wine!!  Finished my medication on Friday...........so I have the OK to indulge starting Tuesday!!

All the boxes of Christmas gifts have been mailed to family.  Christmas cards mailed too   Rich has finished his shopping. I went to the mall today only to find out that most of the stores are closed on Sunday!  At least all the ones I needed to visit!  But only have a few things left to pick up.  Then wrapping and stuffing the stockings!

On Friday night we took a ride over to Wauchula to see the Hometown Christmas displays on Main Street.  I took a couple of pictures - but we were both a little disappointed this year.  The lights were very pretty, and the Christmas music was playing - but not the crowds we've seen in the past.  Not a lot of vendors at all, and Rich was very disappointed that there were no funnel cakes!!  But it was a nice evening, and felt good just to get out and wander around for a short while. 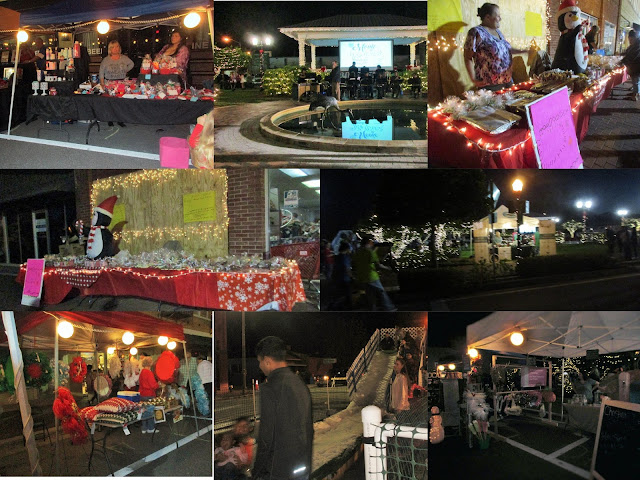 Posted by DDonald at 8:41 PM No comments:

Doctors, Biopsy....... and Finally a get together with neighbors!

And so the saga continues.  I returned to my gastroenterologist a week ago Monday, without any significant results from the medication. He scheduled me for a colonoscopy on Wednesday......which meant nothing more to eat for the day..... drink the liquids on Tuesday, and arrive at Florida Hospital on Wednesday morning at 7:30am.   I was diagnosed with ulcerative colitis, a chronic condition that causes inflammation and ulcers; a form of inflammatory bowel disease.  There is no cure.......only treatment to reduce the symptoms, and cause a remission.   Since I have never had any such symptoms in the past he was quite sure that it was antibiotic induced colitis........from the high dosage of antibiotics I had been taking for something else!! They also did a biopsy. Was supposed to be on medication for two weeks and see him for a follow-up, but got a call on Thursday, the results of the Biopsy were in, and he wants to see me sooner. I'm nervous, and really concerned now!   In the meantime, the results of the kidney ultrasound have shown a small "something" on the right kidney and so I've been referred to a Urologist.... and the soonest I can get in, is not until FEBRUARY!

SO.......It's that time of year....so been getting the house "Christmas Ready"~  and working on the gift shopping. Waiting for one last gift to arrive today for my grandson, and I'll be ready to wrap and ship the box off to the family in Iowa!   So getting in the Holiday Spirit............... 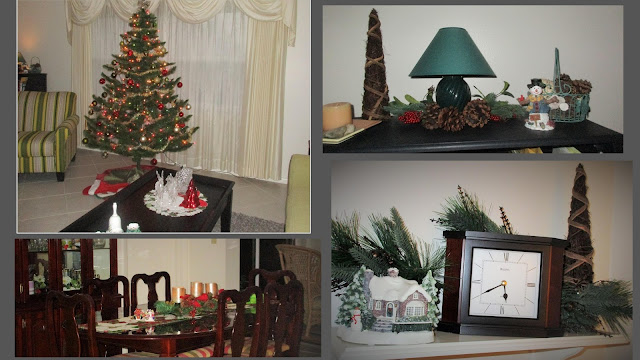 Been invited across the street for a fish fry with Tom and Mike on Friday.  Two really nice guys who spend 3 or 4 months here in the winter, fishing most of the time.

Deciding what to do for Xmas Dinner........and talking again about maybe having our New Year's Day get together.......Got to decide pretty soon!

Today we were invited to a fish fry across the street with Tom and Mike.  Nice group get together.  Tom's son and daughter-in-law, visiting from Wisconsin, and RVing here in Lake Placid on Grassy Lake were there........met them for the first time.....very nice couple.  Former neighbors, Al and Barb were there, along with friends Jim (Feathers) and Jan.   Tom and Mike did a great job with the fish and fries! Barb's slaw was excellent, as was Jan's Fried seafood balls!  Chris and I brought the dessert - peanut butter pie and brownies.

Most of the group has only been back in Florida for a couple of weeks.....so it was a fun evening getting together and catching up. 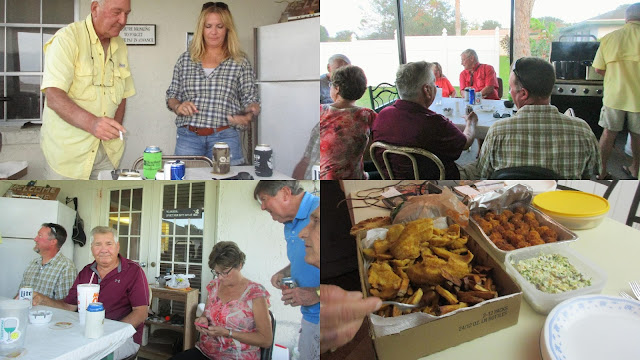 Posted by DDonald at 8:24 AM No comments: