Just wish that this Chinese Virus would Go Away...........But anyone with an ounce of common sense knows that it will not happen...........not until after the Presidential election!  Our far left Democrats will make sure of that!

Meanwhile.............here at home, things are about the same. Only time we are outside, is to work in the yard, or go to the grocery store!!!!   Rich is pretty much out of commission.  He went outside several days ago to spray for weeds..... and moved wrong trying not to step on the sprinkler line that's behind the big bushes in the front yard.  He is having a lot of pain in his lower back.  It has not improved much at all, so is trying to get a doctor's appointment set up.  ( If they ever call back!!)

And so life during this Chinese Pandemic goes on...............still busy in the Kitchen!  Didn't realize how much pasta we've fixed in the last couple of weeks until I checked the photos!!   So we enjoyed Tuna noodle casserole with cheddar biscuits, Oven baked/Barbecued Boneless Ribs ( one of our favorites!), Baked Macaroni & Cheese, Baked Burritos, Shepherds Pie - and finished up the Shrimp.... on Linguine w/garlic & butter sauce.  No baked goodies in a while...... just a few store bought goodies. . 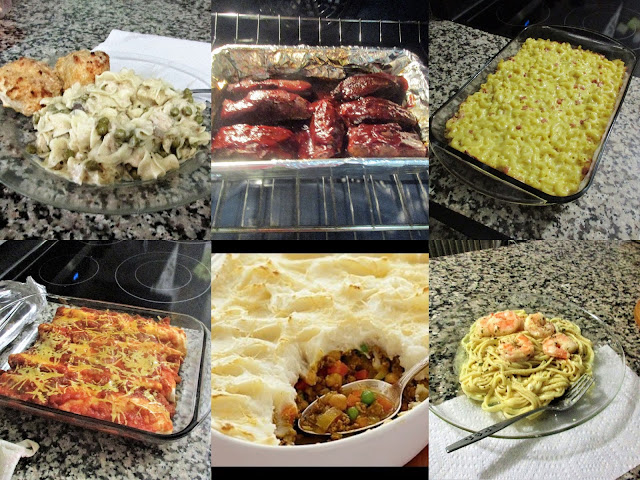 Lots of work to be done in the yard.....especially trimming bushes, growth down by the water,  and trimming limbs from the palm trees.......But it could be a while, especially with Rich's back problem!  And everything seems to grow twice as fast this time of year, with all the rain!!!  Some pretty strong thunderstorms lately,  lots of heavy downpours.....dark skies. The picture on far left is of the canal out back.... the raindrops that day were HUGE!  And there were days when you could barely see across the stree..........that's our neighbors house across the road. 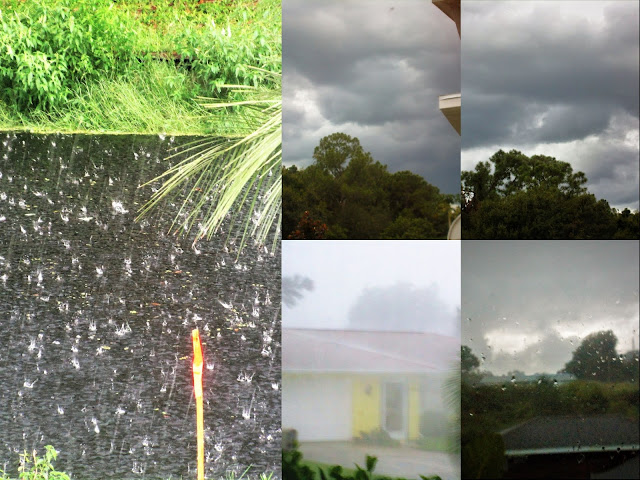 The weather is even keeping the birds away....... We did have a few birds ( and I don't know what kind of bird they are) on the back deck.......and our resident Anhinga down on the dock. 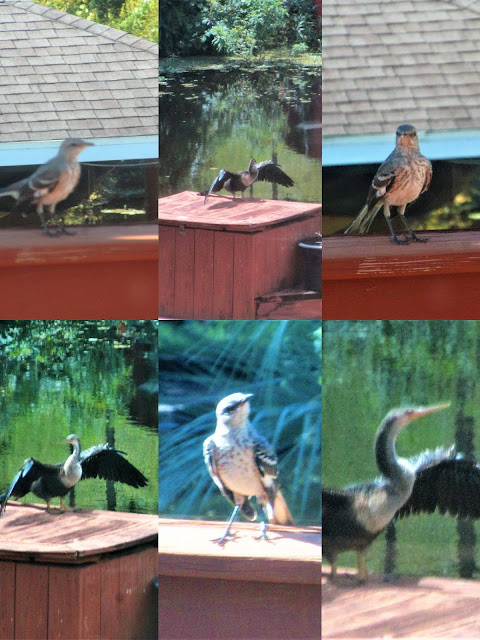 Nothing else much going on.....didn't even get takeout, or delivery lately ( But we are  tonight!!! ). Thank goodness they are at least playing a little baseball ( only 60 games this year, because of the China Flu! )  but I am enjoying watching the Tampa Bay Rays...........especially taking 6 out of 7 games from the NY Yankees....and now in first place in the standings!!   Hope some of the regular show start up again pretty soon.  Nothing to watch on TV..............even the news is getting pretty boring!

I did get online and do a little shopping.  Found a very nice Oneida Flatware set......... (service for eight), 2 sets of white microfiber sheets (deep pocket with 4 pillow cases).  They are very comfortable, and very soft! And we found a bread machine for Rich!   Read all the directions, and I think he's about ready to try the first loaf.  He ( and I) will love not having to do all that kneading by hand!  I also got me a new nightgown (not shown in picture).......It's OK........ my favorites are the Celestial Dream in Walmart........but they don't have them anymore........at least not that I could find! 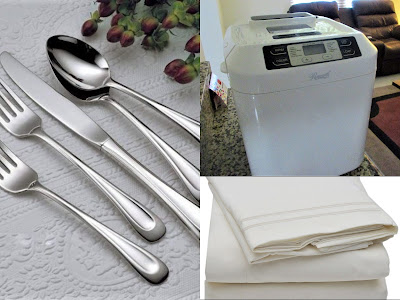 Dennis and the family had some very very ban weather in Iowa!  I had never heard of a Derecho, which is what caused loss of power to over 200K people, and killed 4 people. According to Wikepedia a Derecho is "widespread, long-lived, straight-line wind storm that is associated with a fast-moving group of severe thunderstorms known as a  mesoscale convective system and potentially rivaling hurricanic and tornadic forces"    It other words really destructive.  Dennis and family were without power for 7 days!!!!    Just so glad that everyone is SAFE. He said "it's like a war zone out there" and the highest winds recorded in Iowa reached 112mph, which is equivalent to a lower strength category 3 hurricane. 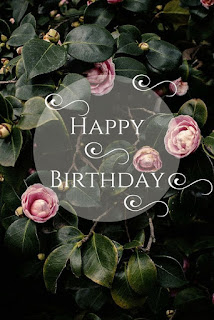 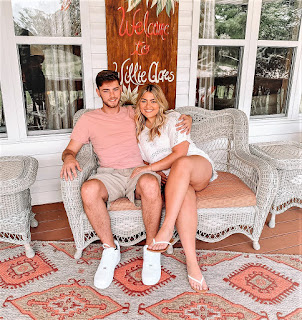 And so, I'll end today with a Happy Birthday message.  Today is Brianna's birthday (our grandson, Dalton's girlfriend)   A pretty awesome young lady that we had the pleasure of meeting back in January.

Well, let me begin by saying I was tested for the Chinese Virus, and about three days later, I got my results.  They were negative.  Guess that is good news.  Rich is still waiting to get his surgery (Corotid Artery) scheduled.
Yes we've been busy in the Kitchen!  ( But we did have Chinese take-out one night). Found a new recipe for Sloppy Joes.  Had enough for two meals.  We both had it on burger buns the first time, but I switched and had it on hot dogs the next time.  Sooo Good!  Rich made up a small batch of Cheddar Biscuits to go with the Tuna Noodle Casserole, and a couple of pumpkin pies.  The plate on the far right, middle is one of our favorites - Cheddar Chicken with Warm Black Bean Salsa over Rice. The last row was Meatloaf night.  Mashed potatoes & green beans for Rich, Sweet potato for me. 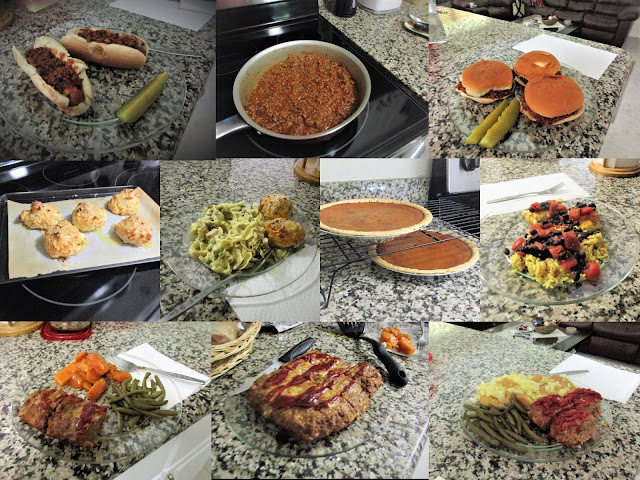 We harvested the last of the pineapples in the back yard.  This was the smallest of the bunch, but the fruit was nice and sweet.  So now we have two of them in the mason jars to root, and one that is still drying.  We'll get that one rooting in a few days. 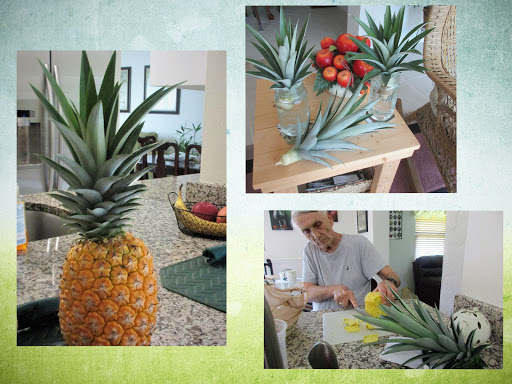 It's been soooooo hot outside (when it's not raining!) that the yard/shrubs etc are so in need of being trimmed!  Just too hot to be out there working!  And then along came Hurricane Isaias!  Fortunately, by the time it reached the Florida coast, it had been downgraded to a Tropical storm.  We were lucky again.... some damage in the Miami area, but nothing real serious.  Supposed to be a busy season..........hope they are wrong! 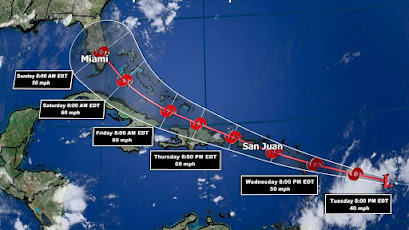 Always enjoy watching the wildlife in the back yard, and down at the waters edge..... but recently we've been seeing a couple of baby gators.  Pictures did not come out real good....

And on July 30th we celebrated 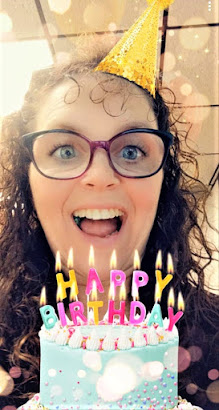 HAPPY BIRTHDAY TO OUR BEAUTIFUL
DAUGHTER-IN-LAW, CRYSTAL DONALD!!!
WE LOVE YOU, WE MISS YOU, AND WE WISH YOU A DAY OF FOREVER MEMORIES!
Posted by DDonald at 10:35 PM No comments: