Finally the Weather is Changing, Cooking/Baking and Yard Work

No a whole lot going one, which explains why it's been more than a month since I updated our Blog. Seems like the whole world is focused on this upcoming Presidential election............and I have to admit I am too!  The hate and destruction going on is very very scary, the values we grew up with are being destroyed, including our Religious values.  But that's enough of that!  I have not missed one Trump Rally on TV.............and that always makes me feel better!

So!  It's the same old same old..............Spending a lot of time in the kitchen!  A few of our favorites in the last month:   Baked Macaroni & Cheese (w a little leftover ham), Chicken with Rice and Black bean salsa,  Rich made fried dough on weekend😋,  Chicken Chili and homemade Cornbread,  Chicken Fajitas w/ refried beans, Rich was back in the kitchen with his Mom's recipe for Potato Donuts. And last night after working in the yard..........we enjoyed home made Ham & Potato Soup!  Delicious! 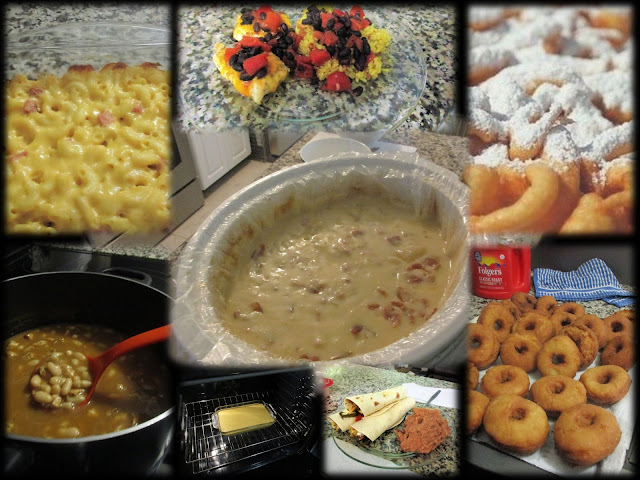 And rainy season?  Well it seems it is FINALLY coming to an end!  Given the huge number of hurricanes this year, we were extremely lucky.  Nothing real serious at all here in Fl.   It's been 4 or 5 years since we stayed here at home in the hottest part of the summer. ( And yes I would much rather be in NY state enjoying our time at the lake! ) Between the China virus, and the hot weather I am so sick of staying inside all the time... leaving the house only to see a doctor or buy groceries!!!    But this last week has been a little bit better. Daily temperatures are down to the mid 80's!  So yesterday we started to get some well needed work done in the yard.

We trimmed the topiary in the front yard,  Cut palm tree branches, and worked on some of the shrubs along one side of the house and out near the mailbox,   And then Rich sprayed the weeds in those areas.   Still have 4 more palm trees that need branches removed, bushes in the back and the other side, and an area down near the canal that is way overgrown! 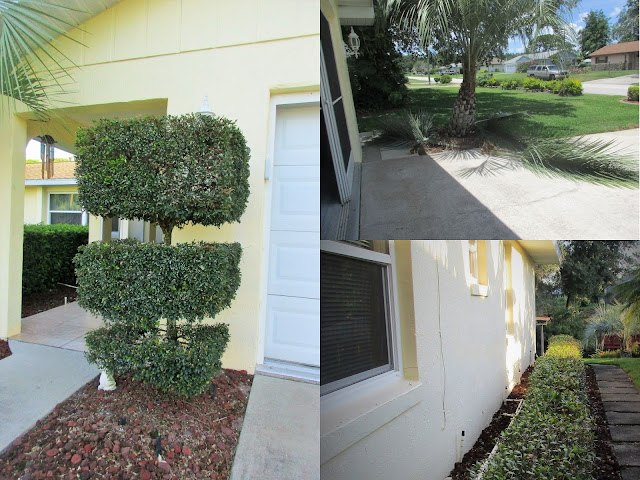 Speaking of the back yard!!!!  Yes we need to get a lot of trimming done, but what is much worse, is the canal itself.  In the summer the canals tend to get pretty weedy, and so the community always takes care of spraying the canals.  They have done it every year since we moved here.  Always well taken care of , clean etc.  There has always been two houses on this canal that did not want the area near their yard sprayed..........and so it was not, but the rest of the canal WAS.  This year both of the again asked that their area NOT be sprayed, but this year they decided they did not what Canal 5, which is ours to be sprayed at all.  And so we are all fighting it, and a we've all signed a petition to get it taken care of.  In the meantime we can see pretty much nothing but weeds, and they are so high that we couldn't get the boat out of the dock if we tried!   Picture below show the back canal area..........and the three pineapple plants that we need to plant - once we get the back yard done! 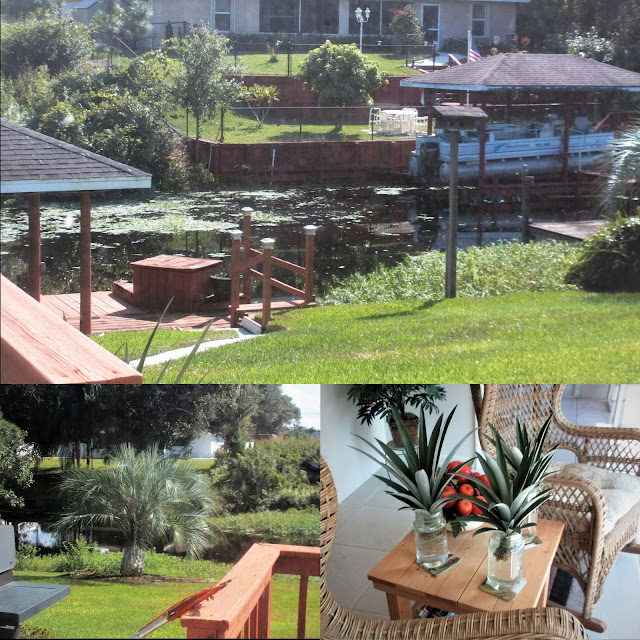 So during this last month it's been back to the doctor for me, headaches, upper back pain, loss of appetite, 3 days in bed (almost around the clock).  Had bloodwork done, had CT Scan done, but doctor had no idea what was going on...........and it all just went away!  She thought maybe it was Covid- 19 (given the symptoms)   She had me get tested for Covid about 3 weeks prior, and it was negative.  She still thinks I had Covid and that we may have me checked for anti-bodies.  In the meantime I'm feeling fine.....

Rich was tested for Covid 2 days ago along with urine sample, x-ray, and ekg, in preparation for his left Carotid Artery surgery on Thursday.  He stopped taking so. me of his medication and vitamins as directed yesterday.   Doctor told him that given his health and age, the chances for chance for stroke etc, with this surgery was still very low  0-20% , and that he would anticipate only one night in the hospital.  The hospitals right now are still pretty strict on letting anyone in to see patients.......but I'm hoping I can be there for the surgery, and be able to see him afterwards.

Posted by DDonald at 9:24 AM No comments: