Again - most of this past week was not exciting at all.  Rich was at his desk, with the stock market, much the same as any other weekday, and on Wednesday had his appointment with the Cardiologist. and was scheduled for some tests to check the carotid artery, and the femoral artery where he has the stint......I was a bit under the weather.........not feeling well, especially with my legs bothering me, and even took an afternoon nap 2 or 3 days.  Had to go out on Wednesday for my echo-cardiogram and on the way home from doctors - we stopped at Hibachi for dinner.

But the weekend was far from boring!  Friday night we fixed Jambalaya for dinner, and Saturday I had the potato soup cooking in the crock pot, and we enjoyed our afternoon Banana Smoothies!  Sunday I made a couple dozen peanut butter cookies, and a big dish of macaroni and cheese for dinner! 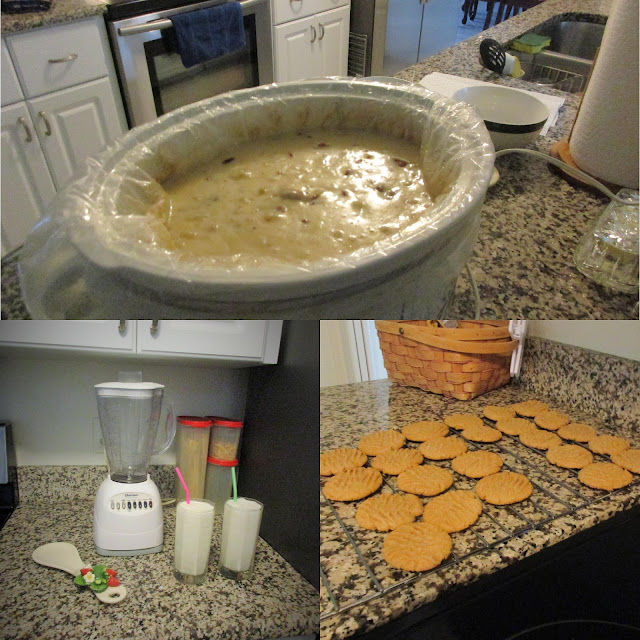 Mid afternoon on Saturday we had a pretty scary situation.  Rich went out to the garage, the door was already open - but was surprised as he started to walk into the driveway, as several police cars were blocking the road to the west.......and a police officer with a long gun was walking in the yard toward the garage.  Rich went back in side - and  watched as the police officer stood just outside our garage with his gun aimed toward our neighbor's home.

A police car pulled INTO our front yard, and another officer, also with a long gun, was walking past our front window, around the side of our house, walked across our deck in the back and then down to the canal, where he made his way through the bushes into our neighbors property........ But this time - another officer was knocking on our front door asking us to please leave the house and move down the road to the east.........  We were getting a bit nervous - and by this time we had made sure all the doors were locked - and Rich had secured his gun.... 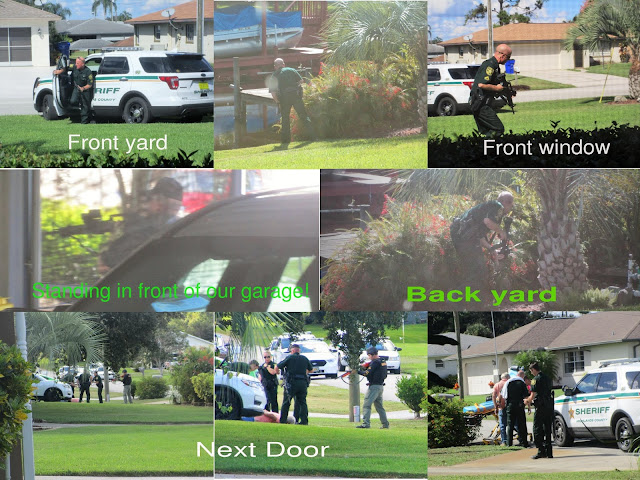 Fortunately - no shots were fired. Long story short, our neighbor has had some very serious medical issues, and is having very very reactions to changes in medication..... He has been taken away, charged with domestic abuse.  Fortunately no one was hurt, but he did seriously threaten Diane.  We knew John was having problems - but had no idea it was this bad.  They are great neighbors - and we are so sad that this had to happen. I have spent time with Diane since.... she is fine, and I know that I would be a total wreck had I gone through what she did.  I pray for both of them.

And so......on Sunday Rich had the ladder out, his electric saw with the extension handle and proceeded to cut a ton of branches from the neighbors tree that were growing across on to our property.  He did the cutting and I stacked them along the side of the house, and along the driveway, as Cindy ( who does our lawn) will be coming Tuesday or Wednesday to haul them all away.  Things were going quite well........UNTIL the very last branch, the biggest branch was to be cut.  It was also one of the highest ones to reach........and when it fell it came right at Rich, who used his left arm to keep it from knocking him over..........and his arm got cut up pretty bad!  So he his all bandaged up!!

It's been a couple of weeks now - and not a whole lot of news to share.  Neither of us have had a whole lot of energy , and it's been so hot!  And still is!!

Rich has been out doing the fertilizer, epson salts on the palms,  and spraying more weed killer, but it seems like one day outside working and the back and legs bother him for a couple of days.  The muscle ache in my thigh continues, as does the cramping in the calves and so I've been getting in some afternoon naps.   We both had doctor appts - Rich with the Gastroenterologist - following his colonoscopy, and looks like he has to continue every year as they continue to find, polyps that are cancer forming.  I had my first visit with the Cardiologist who confirmed with another EKG that I did indeed have a heart attack, and put me on the baby aspirin a day routine.

Rich sees the cardiologist this week, and I have an echo cardiogram and a two day chemical stress test between now an the 25th.

But in the last 4 or 5 days we've both found a bit more energy. Meals are getting back to normal - Rich's Pizza ( I had eggs and fruit), Chicken Chile and Cornbreat,  Peanut Butter cups for desert, and today Meatballs for the Linguini and Garlic Bread tonight.  Last Monday we did meet up with Buddy and Diane here in Lake Placid at the Golden Corral.  Diane still remains in good spirits, but continues to have more difficulty walking, and it won't be long before she'll need the wheel chair.  The clowns are back in town, so hopefully we'll get together with them one day soon. 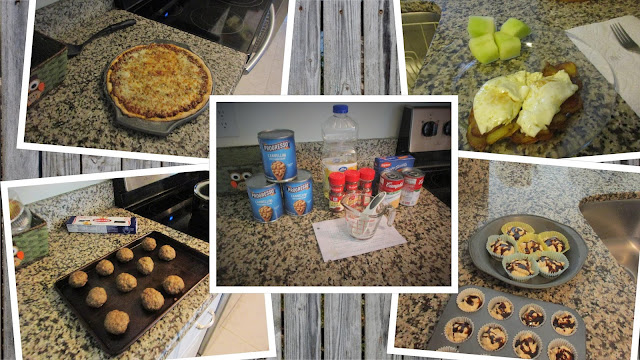 Have not seen much of the Blue Heron, Whistling Ducks  etc.... but in the last week or so we've been entertained by the beautiful Cardinal on the back deck, and the Anhinga, drying his  wings after fishing off the dock. 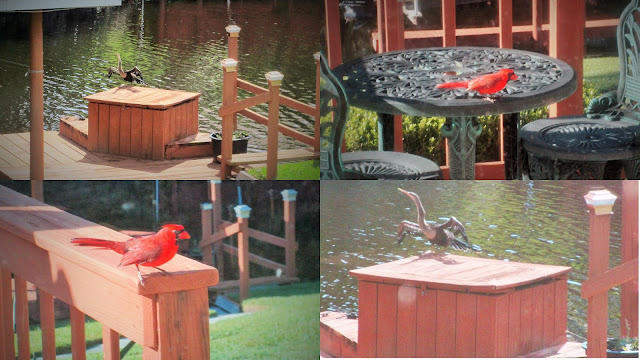 And yesterday we actually got back outside and trimmed more of the palms, bushes in the yard. 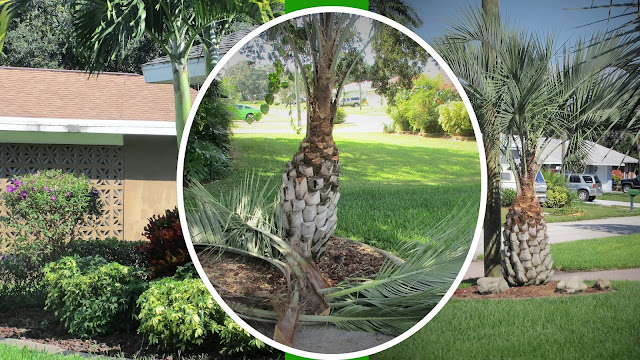 No plans for anything exciting in the near future!  Guess I'll get started on my Christmas Shopping!

Posted by DDonald at 4:27 PM No comments: