Once again, for the past few weeks it's been pretty quiet. A lot of the same old aches and pains.............and keeping busy around the house.   The new timer for the sprinkler is working perfectly.  The palms have been fertilized, the azaleas have been fertilized, and this next week will give the palms and bushes a final trim in preparation for leaving to head north.

The weather has been pretty crazy...and we are in desperate need of rain!  Wild fires across the state - but fortunately nothing close to us. If you remember, Rich finished painting the boathouse several weeks ago.  Well - since then the water level has really dropped.... about a foot!  Today Rich got the paint can back out an painted the bottom of the supports on the dock - that is now  "above" the water level. 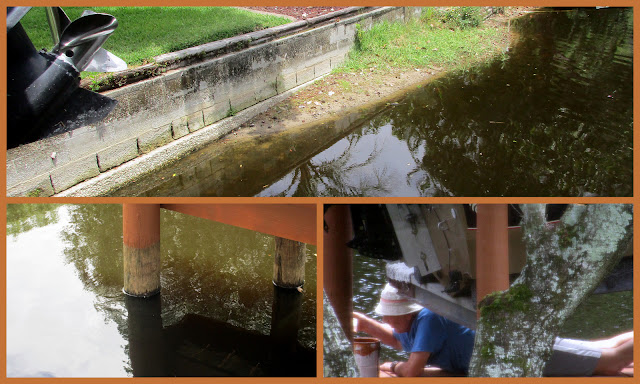 In the meantime I got the broom and the hose and cleaned the front porch!  And then, pulled weeds, trimmed and fertilized (liquid miracle grow) all the pineapple plants We have three pineapple starting along the side of the house, and the two in back are starting to bud.  Within the next week or so, we'll plant another that's been rooting inside. 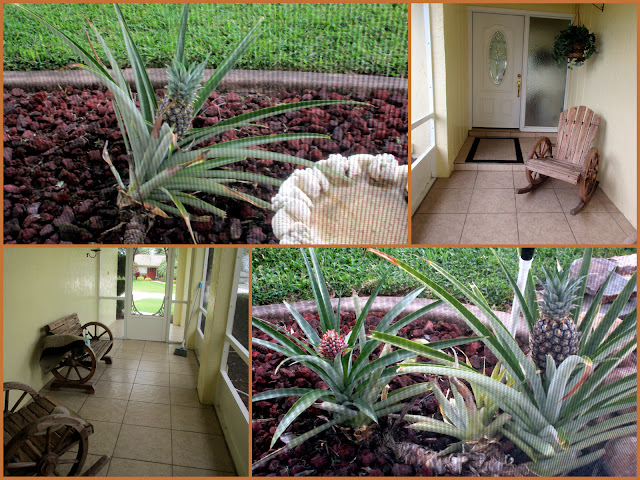 This past weekend was our granddaughter's Senior Prom.  Below are some pictures that our son Dennis took...........and who managed to get his face in one of them! Can't believe it - she is such a beautiful young lady........Chauna and Ryan with a few of their friends on prom night!! 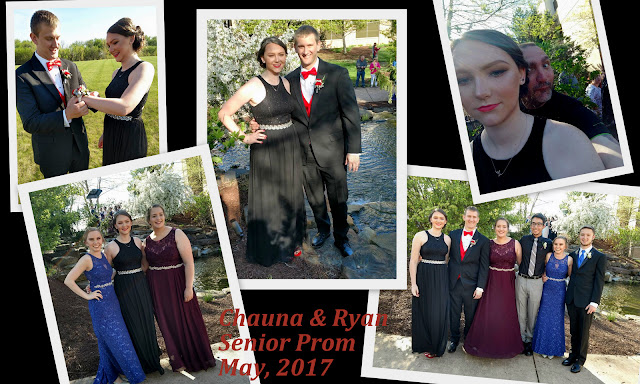 Looking forward to attending her graduation, meeting Ryan and Sara (Dalton's girlfriend) and spending time with the family before we head to NY.

Not hard to tell we getting older............. our friend Krystal is doing much better, FINALLY.  She back to tending her horses and improving more and more every day.  Planning  dinner and show with them next month to see a tribute to Barry Manilow.

In the meantime we got some sad news from our good friend Buddy, about his wife Dianne.  So sad!  Please pray for her.  Here's the message we received from Buddy...........


NEWS ABOUT DIANNE
IN 2013 DIANNE WAS TOLD SHE HAD ORTHO STATIC MYCLONIS. THAT IS A SLOW ATROPHY OF THE BRAIN.
WE WENT TO THE MAYO CLINIC THURSDAY AND FRIDAY FOR MORE TESTS. THOSE TESTS SHOWED THAT SHE DID NOT HAVE WHAT THEY THOUGHT. SHE HAS MULTIPLE SYSTEM ATROPHY. THAT MEANS THAT NOT ONLY HER BRAIN BUT HER ENTIRE BODY IS IN ATROPHY. THE AVERAGE LIFE EXPECTANCY FOR SOMEONE WITH THIS DISEASE IS 10 YEARS FROM WHEN IT WAS DIAGNOSED. SHE HAS ALREADY LOST HER ABILITY TO WALK, TO SPEAK CLEARLY, TO SING AND TO PLAY HER GUITAR. WE NEED YOUR PRAYERS.

Posted by DDonald at 7:29 PM No comments: 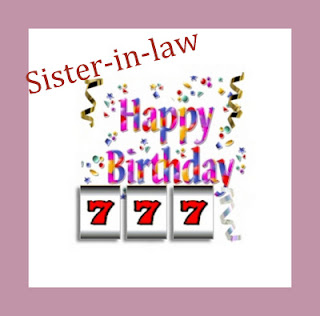 Well, it's still April, so the birthday's are not yet over......  Today we send our best wishes to our sister-in-law, Diane Burger Donald!  I'm sure she's off to the casino to celebrate....so hoping she hits the jackpot!!!

The weather, has actually been quite nice these past few days, with a nice breeze and the humidity down.   That time of year for the Caladiums to bloom...........and they're lookin' good.  I really should get some more!!!  We continue to watch the Blue Heron in their nest........and Rich thinks the eggs have hatched.....so we'll be watching for the babies!  In the meantime we did get a picture of the one in the nest and the other taking flight - probably for food!! 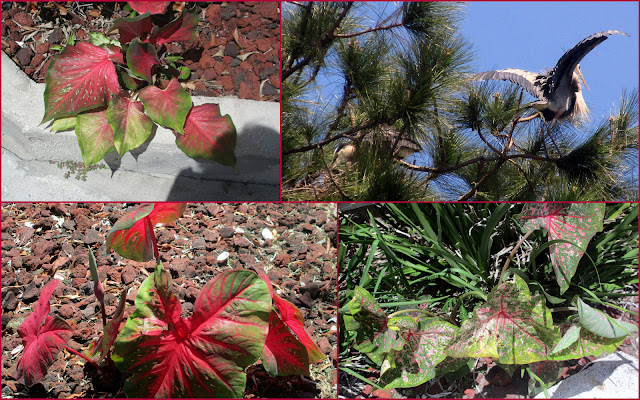 Not sure if I mentioned it before or not, but in addition to Rich digging another hole in the backyard to fix a broken sprinkler, we had to order a whole new timer for the system.  That arrived on Wednesday and Rich has it all installed.  We'll know tomorrow morning if the time is set correctly or not!

And today we worked hard in the back yard trimming the large tree down by the boathouse.  The tree is not the best, with the trunks spitting in places, so we needed to take some of the weight off the limbs, as well as clear the low hanging ones near the roof of the boathouse.  Thank goodness for the breeze today!!!!  We cut and bundled and carried all the bundles out front ( they will pick up on Tuesday) Phew!!!  Hard work......especially when we both have bad backs!!! 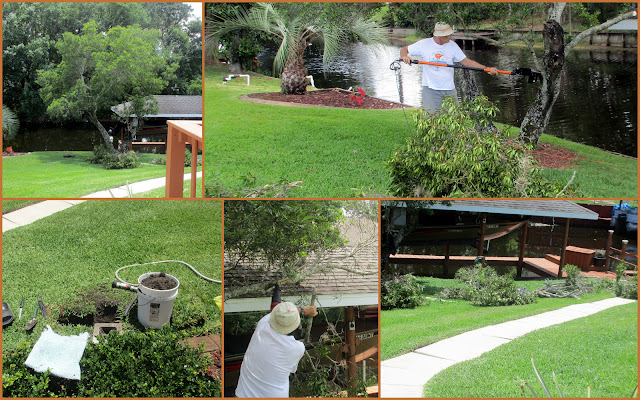 Left overs (pork chops) for dinner tonight, watched a movie and a couple of our favorite programs.............and going to call it an early night!   Tomorrow Rich starts his restricted diet, and Sunday is liquids only..........in preparation for his Monday morning colonoscopy! 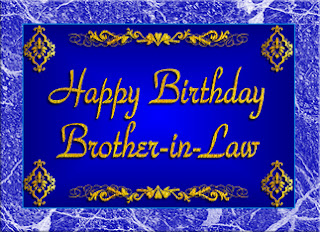 The first birthday this month was Rich's brother Bob on April 8th!

One of these days we'll be able to celebrate together!!!  Hope you had an awesome day, Bob! 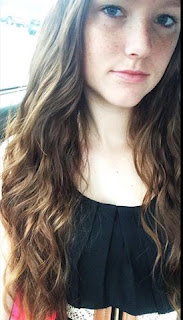 On Saturday Dad(Dennis) and Mom ( Crystal) and brother Dalton and his girlfriend Sara celebrated an early birthday dinner at the Texas Roadhouse.......where she got to ride the  Birthday Bull!! 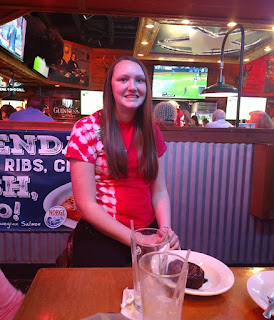 And today we send our Birthday wishes.

Happy 18th Birth
day to our beautiful granddaughter, Chauna Donald!!  We hope your special day is filled with fun; with family and special friends!  May your dreams and wishes all come true, and your celebration be as awesome as you are!  Love and Hugs from Pa Pa and Grandma Do! 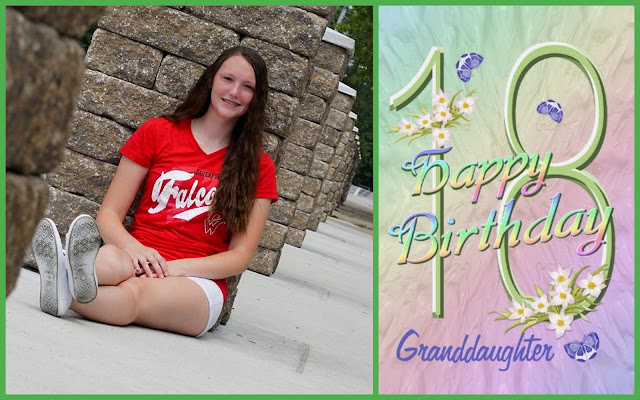 Think we mentioned before that we have some birds nesting in the neighboring tree!  We originally thought that it was the sand hill cranes, but recent pictures proved us to be wrong.  It is actually the Blue Heron!   Here are a few recent pictures we were able to get.... Amazing to watch every day! 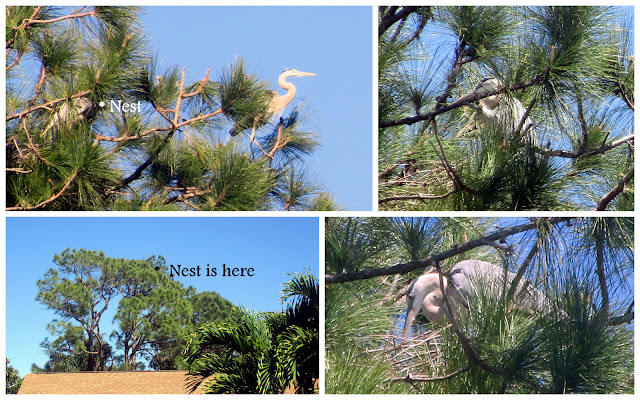 Not a whole lot going on the past week or so.  A little work in the yard. Fertilized the azalea plants and the palm trees.  Hate the new garbage pick up (only once/week) and having to sort out the recyclables!  AND the thing in the garage that turns the sprinkler system on, broke!  Seems that Rich encounters one thing or the other every year about this time with the sprinklers.  This year it's inside, and not just the sprinkler heads or broken lines!   Thinks he might have it fixed..... If not we'll need to replace the box before we leave in May.

Tom and Mike packed up and headed back to Illinois on Sunday, and our newest neighbors Jim and Patti arrived the same day, but only staying for 3 or 4 days.  Plans for dinner with them again before we leave in May.....

OH!  Our yearly visitors - the Western King Birds are back, and nesting out back.  AND driving us crazy pounding on the slider windows every day! 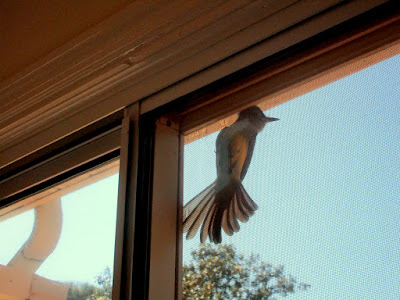 Last night we met up with Buddy and Dianne, and Nathan and Krystal.  This was the first time we've seen Krystal since her operation back in January.  She's been through a pretty long recovery time, and still can't be up more than maybe half thd before she has to lie down; the neck is still painful.  And Nathan - what a guy!  He's taking care of the horses, working full time, and is still the chief cook and bottle washer........  But we enjoyed the evening with the four of them, and have planned at least one more time before the end of May. 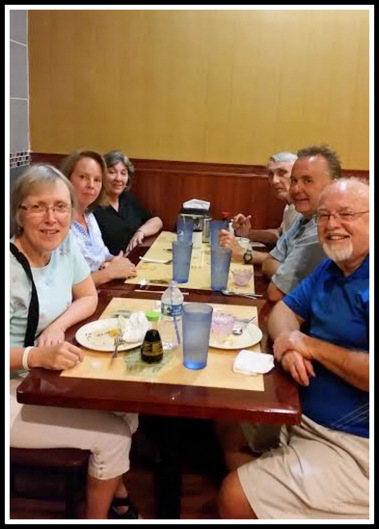 For the past month or so I've been having a lot of pain in my left foot, near the back/inner side of the heel.  Visited Dr. Feldman in Sebring today (same doctor that operated on Rich's foot a few years back).  Xray showed a heel spur. 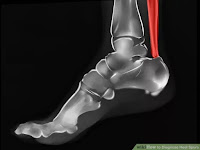 The spur is on the upper portion of my heel, but he said that the growth itself may not be the cause of the pain, but rather the tissue will build up calluses to help cushion the spur, which eventually can cause wear and tear on the joints, and the spur compresses the tendons, nerves and/or ligaments which can cause tearing, pain and or swelling.  The tenderness and pain at the back of my heel worsens when I push off the ball of my foot.    He gave me a shot of cortisone, as close as he could to the affected area.  Could not get directly to it, because of the proximity to the Achilles tendon.  Also put me on some antibiotics, told me to try not to wear my "flip flops" all day, use heating pad in morning and ice if bothers me during the day and aleve if absolutely needed.  See him again in a month.
Posted by DDonald at 3:04 PM No comments: