Seems like I've only been updating this Blog about once a month.  This China Virus is just playing havoc on my being able to do much of anything......................except seeing the doctor or going to the grocery store!  And in the past 2 or 3 weeks we've not even been able to watch our favorite TV programs!  Not sure exactly why...........but Direct TV no longer airs anything on Channel 10.  And, since we always record our programs to watch later.......never paid much attention, that 99% of what we watch is on Channel 10.
So a couple of weeks ago, while doing some heavy lifting, I did "something" to my upper back.  Was pretty sore/painful, like a rock sitting between my shoulder blades, or like pins and needles, and it moved into my left shoulder/arm.  Saw my doctor who said it was nothing real serious, just very very inflamed.  She gave me two steroid shots , a prescription for Naproxen, 500 mg 3 x day as needed and Methylprednisolone for 7 days.   I am still experiencing the paid, and will be starting physical therapy this coming Tuesday!
Moving on to Christmas Week We ordered in one night.........but we got in some good cooking and baking.  Rich made 3 more loaves of his homemade yeast risen bread. He made a batch of his Potato Candy, which is absolutely delicious. Our next-door neighbor loves this........so he made some extra
that we could share! We exchange gifts with three of our neighbors each year.  Nothing big.... usually candy or something home made. 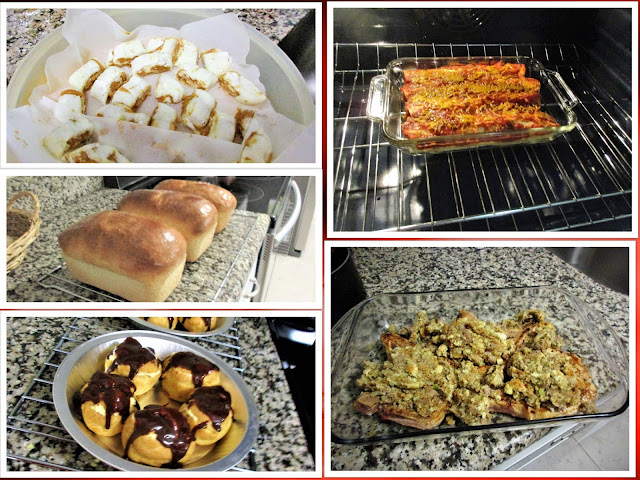 I fully expected, since he has never NOT made his pumpkin pies at Christmas Time that he would do the same this year.  But instead - he made cream puffs.  Normally he would top them with powdered sugar, but elected to make a chocolate topping!  We did order in one night, and I made stuffed pork chops, Baked Burritos, and Crock Pot Chicken and Noodles,  and Waffles with Strawberry topping and whip cream and Sausage!
Christmas Day was quiet, but one of our neighbors dropped off a big dish of goodies, including pumkin cheesecake, and an assortment of homemade cookies!   This year we each got our presents a week or so early, as they were bigger items, ordered on line, and ones that needed putting together.  Rich got me a treadmill, which I love!!!!  And I got Rich a new Desk Chair and a Glass Matt for under the chair. He really likes the lumbar support on the chair.  And this is where he spends most every day on the stock market!  And we got new wood blinds for in the spare bedroom.  Christmas Day was fun. Rich joined me in the kitchen, while we made Lasagna for Dinner.  ( It was delicious!) We enjoyed one of our favorite "adult" beverages - Eggnog w/Fireball Cinnamon Whiskey. 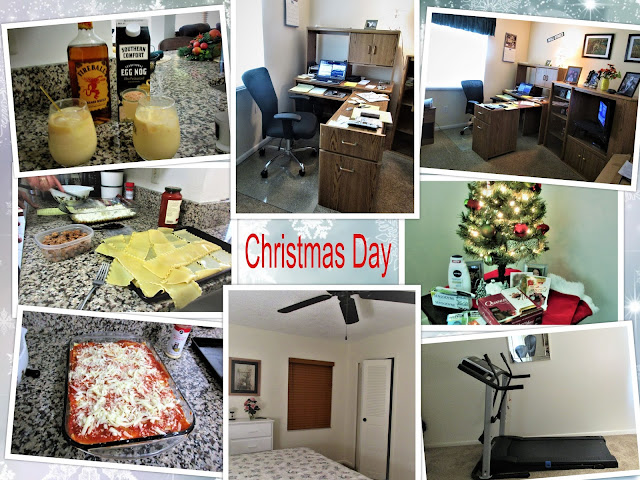 Tomorrow is supposed to be pretty nippy. The forecast is for about 38 degrees in the morning, but getting up to about 55 degrees mid afternoon.  So in the morning I will get some ham and potato soup cooking in the crockpot!
And I'll close with this..............I saw this somewhere on Facebook a few days ago, and really liked it. 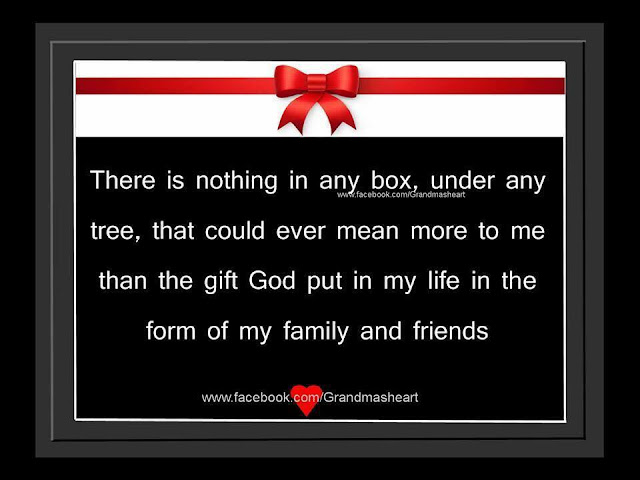 And then it was Thanks Giving Day!   This is a day that is usually quite festive.  For the past several years our good friends, Nathan & Krystal (the Showalters) and Buddy & Dianne (the Douglas') have joined us, here at home, for Thanksgiving Dinner.  Buddy always brings his homemade Coconut Cream Pie,  and Sweet Potatos, and Nathan always brings the "adult beverages" and usually a vegetable to share.  It's always a BIG deal, because Dianne can't eat Ham, and Krystal can't eat the desserts! ( Rich also has his pumpkin pies)  So, as a rule we bake both a Ham & a Turkey along with all the regulars.... mashed potato/gravy, green bean casserole, biscuits, cranberry sauce.... and I always make sure I have made some Peanut Butter Cups ( fat free cool whip/peanut butter) in the freezer, so that Krystal has dessert!

This year, with the Chinese Virus it was just Rich and I.  Just a small Turkey ( that was absolutely terrible!!!!!) mashed potatoes & gravy, sweet potatoes for me, green bean casserole.. and cheddar biscuits  . It was over quickly...........and then there was the mess in the Kitchen to clean up!

We decided this year not to put up the big tree in the living room.  I spent most of the day,  Thanksgiving , getting a little Christmas Spirit.  A small table top tree in the family room. my favorite Sleigh, with Reindeer filled with candy.  A few splashes of color on the small mantel, the dining room and kitchen tables, and a few decorations on the front entryway. 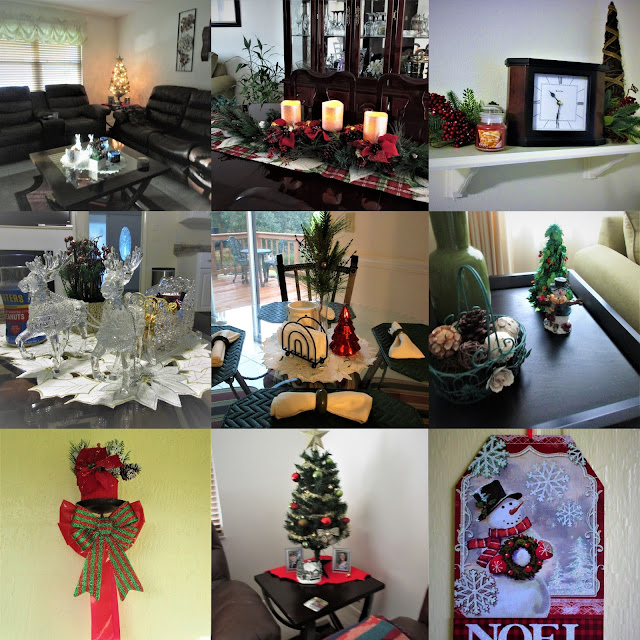 I have to admit that we have been getting some very nice weather lately.  The high humidity is gone, and we are getting some nice days anywhere from the 50's to the mid 70's ( colder at night).  I am just loving it.  Winter is definitely MY favorite time of the year hear in Florida..........Rich?.... well he dresses in several layers once it gets beloow 80!  But it's so nice to have the sliders open during the day, and watch the birds in the back yard. 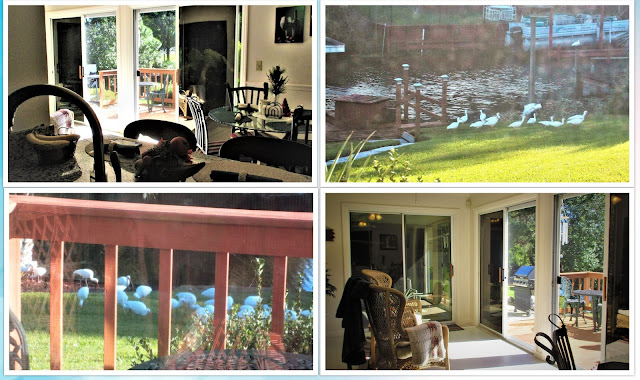 I have completed all of my shopping for Christmas.  Package has been mailed to the family in Iowa.  And gifts for brother Dave, and Rich's Brother Bob& Diane.......are scheduled for delivery.  All of my Christmas Cards have been written and mailed.  And this year we have cut back on the gifts and stocking stuffers.  I have received MY gift........I asked for a Treadmill, and it arrived a week or so ago.  Kind of hard to hide it from me..... so Rich finished the assembly about a week ago.  And I am very very much enjoying it!  Already dropped 4 lbs!!! 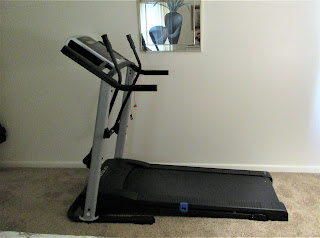