Back to the Broadway Palm..... 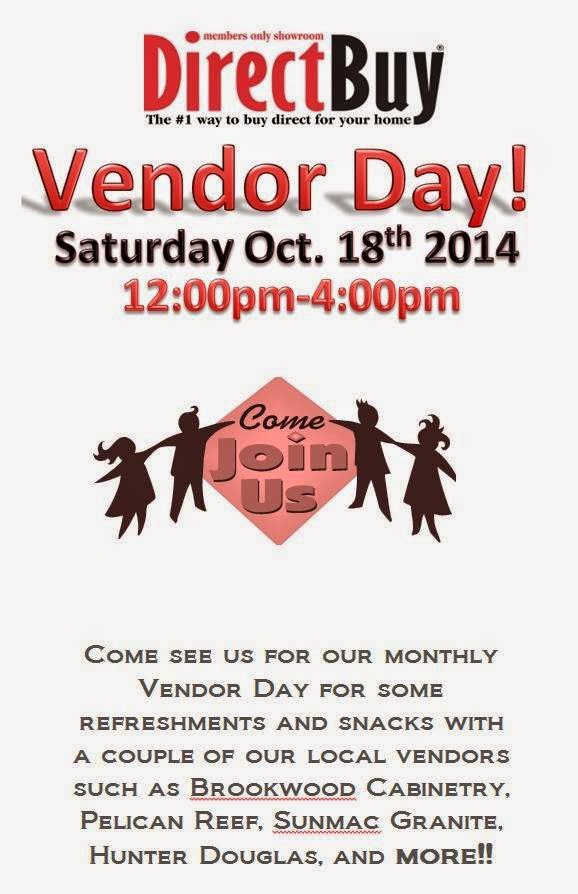 A week or so ago we got an invitation to visit Direct Buy in Ft. Myers.   As a member of Direct Buy you have access to dealer pricing that is not available to the public.  Basically for a minimal membership fee you can buy everything (except food and clothing) that you buy in any store in town or on line without the markup and shipping that you pay when you purchase in a store or on-line.    There is still a lot that we want to do here with the house - so we decided to make the trip to Ft. Myers.

Saturday was also Vendor Day........ which they have every two weeks, were local vendors are on site for your assistance.

We were very impressed and decided to become members.  In addition to our membership we received a new U3ISlate Tablet, and a $100 Restaurant Gift Certificate.  Those of you who know us - know that we have not yet graduated to the Smart Phone - so it could take us a while to figure out how to use this Tablet!!

Our appointment was for Saturday......but we decided to go down on Friday afternoon, and go back to the Broadway Palm Dinner Theater for the Friday night presentation of Buddy - The Buddy Holly Story. 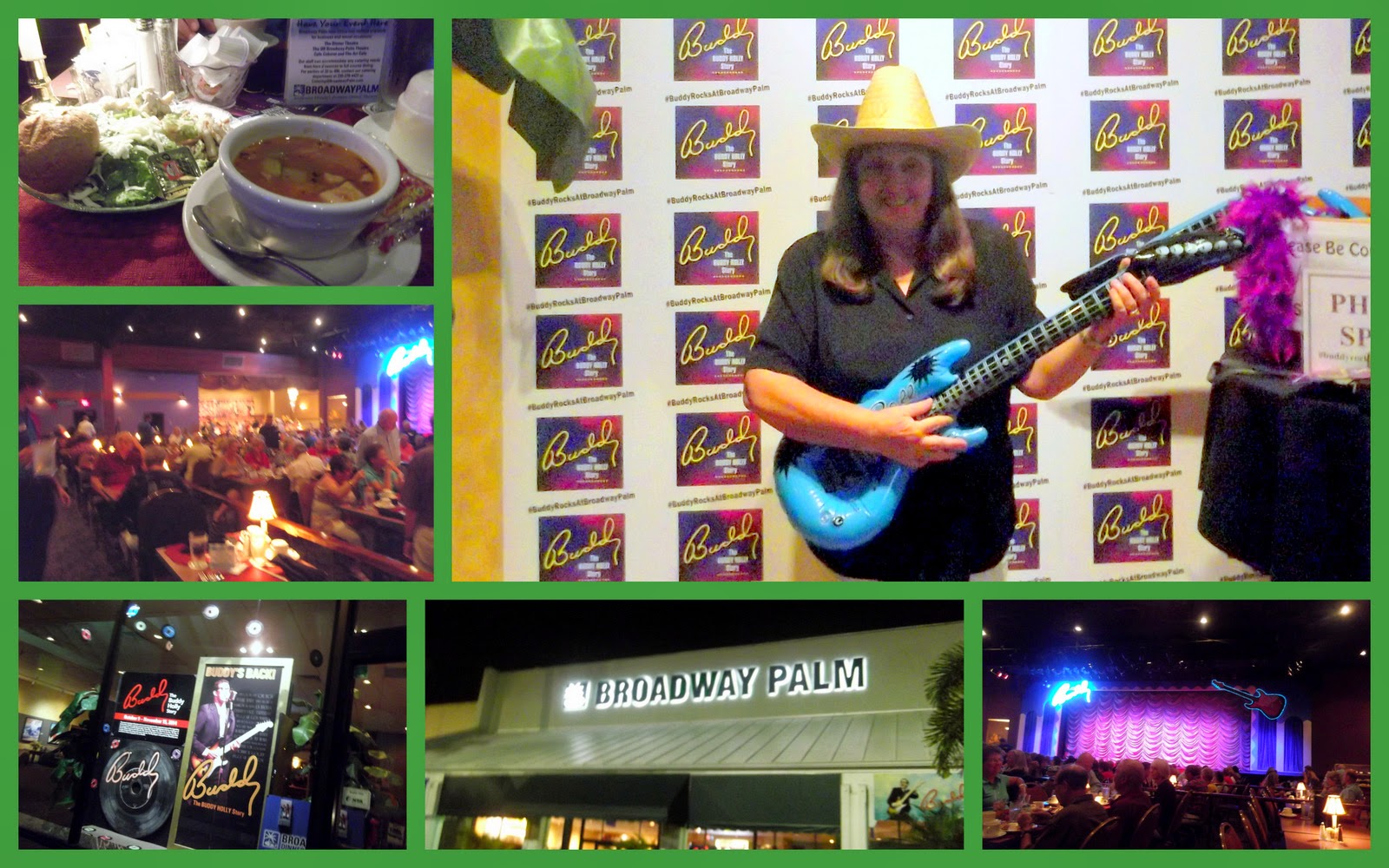 We were here for the first time a couple of weeks ago to see Those Were the Days - which was so good, we wanted to try it again.  And we were not disappointed.   The buffet menu was different tonight featuring a great salad bar, pork/vegetable soup, baked potato, veggies, beef tips/rice, fish ( can't remember what kind - cuz I don't eat baked fish!), and some kind of chicken cooked with peaches which was wonderful!  And of course every dessert you can possibly think of on the dessert tables.

The show was terrific.  Started out a little slow, but got better and better as the night went on.  By the end of the show everyone - even Rich!!! was on their feet singing along, clapping and dancing in the isles!  We had a great time.  I think we're going to look into their special - where you save $12/ticket if you attend four shows during the year!  Tickets are a little pricey - but the food is delicious and the entertainment is excellent. 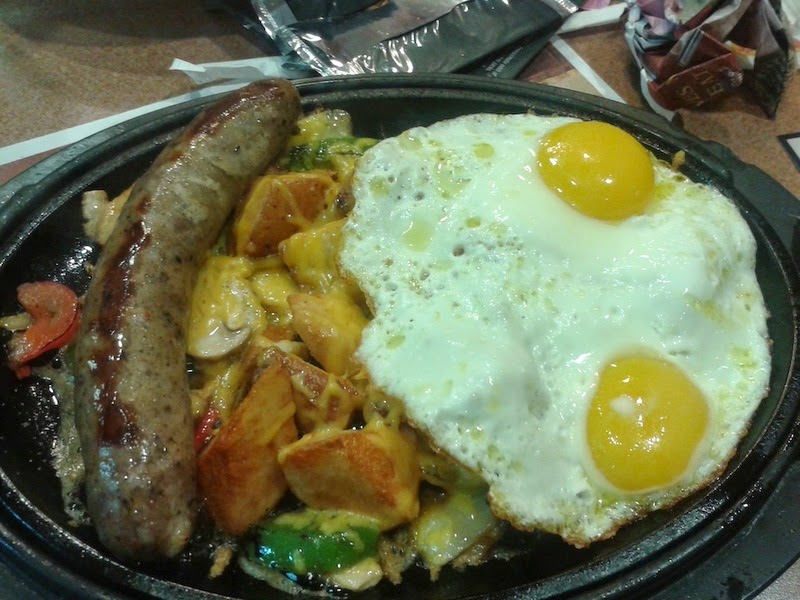 We slept in Saturday morning and didn't leave the hotel until 11:00.   Since we missed breakfast at the hotel we decided to stop at Denny's on the way to Direct Buy.

This skillet breakfast with eggs, sausage, onions, peppers, mushrooms and home fries is excellent!!  I skipped the mushrooms and shared some of mine with Rich!

We were home about 4:00.  Breakfast was BIG - so I didn't fix any dinner.  We chilled, watched a little  TV - grabbed a sandwich for dinner a little later and called it a day!

WOW........It has been a while since we've been out fishing.  The summer season brought lots and lots of rain,  but thankfully no serious tropical storms or threats of hurricanes.  If it wasn't raining, it was so hot that neither of us were in the mood for baking in the sun out on the water.   But this past week the humidity has been down, the rain has tapered off and while the sun is still warm, the mornings are very comfortable.

We tried the same for Sunday morning..............And we were heading down the canal for the lake by 7:00 am.  It was  a beautiful morning, the weather was perfect and the sunrise over the lake was superb. 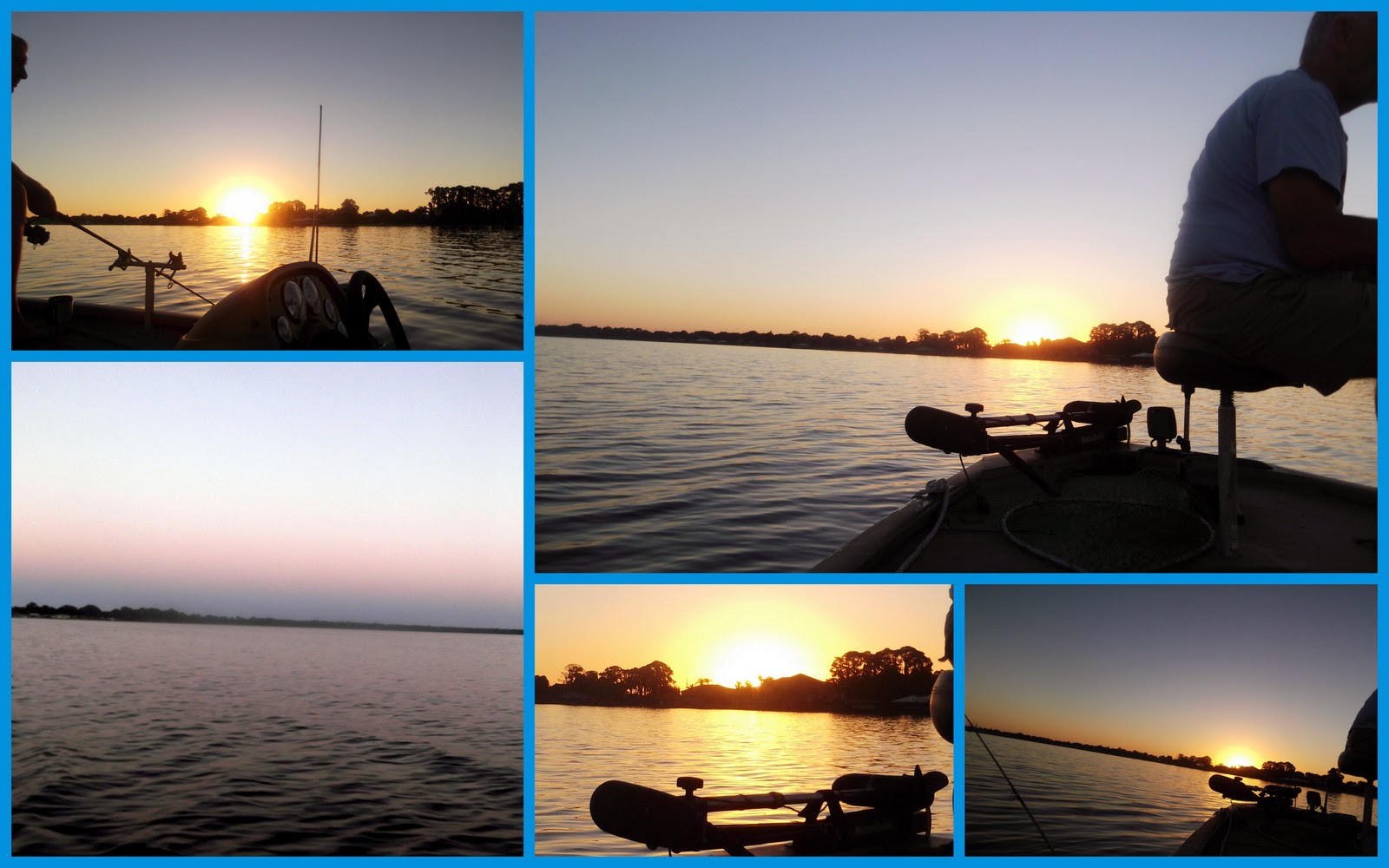 Unfortunately - we went home empty handed. No Fish today.  We did not have any live bait with us this morning; we fished with artificial worms, and jigs.  After about 3 hours we called it a day. And by then the sun was getting pretty warm.

So we headed into town for breakfast.  We stopped at the Interlake Boulevard Cafe, right here in Lake Placid.  Rich did the bacon, eggs, home fries, and toast, and I had the Western Omelet.    From there we headed to the bait shop and picked up a dozen shiners, and a box of red worms for morning. 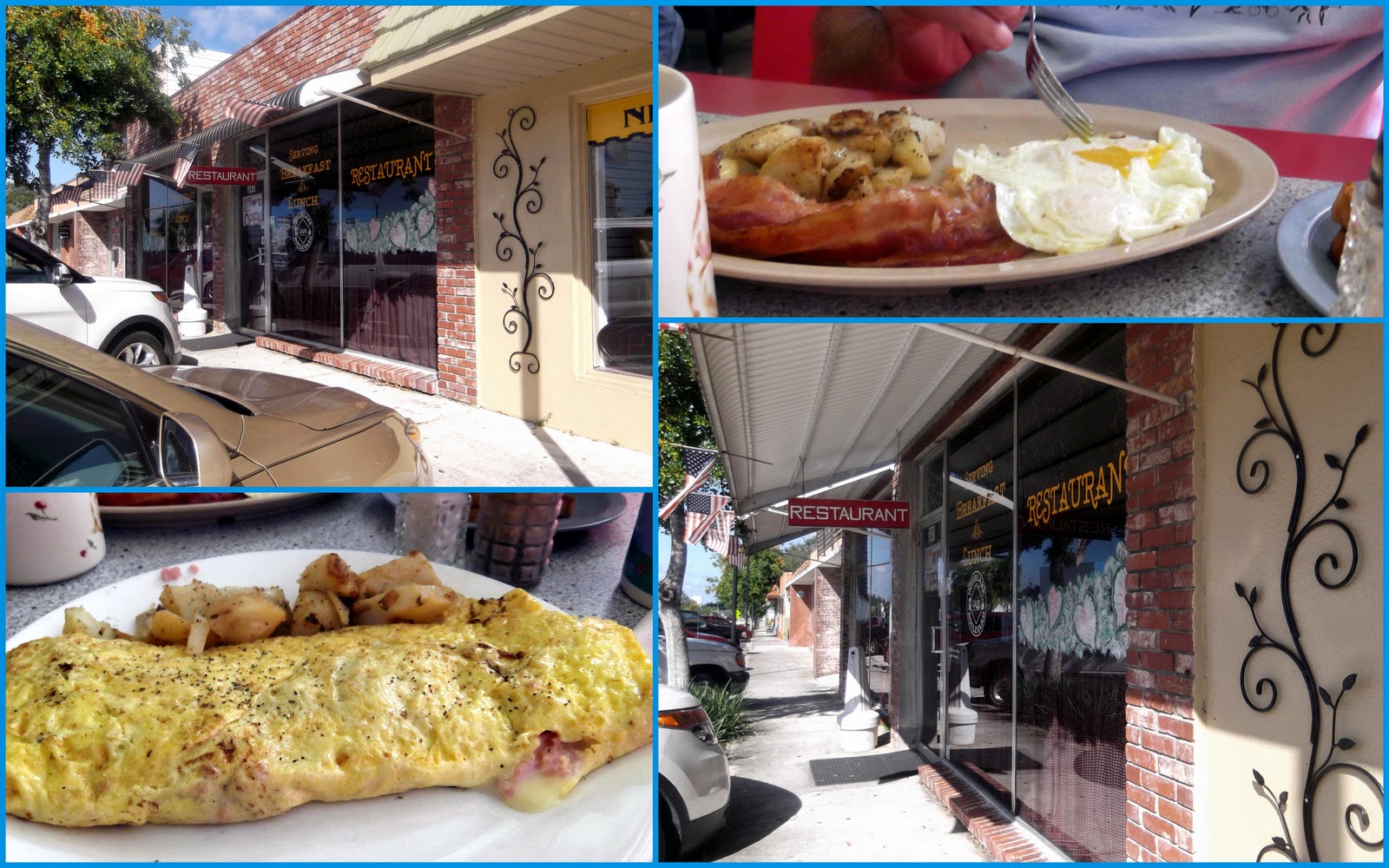 We were up on time, had our coffee on the lanai, and headed out about 7:00 am again on Monday morning. It was another beautiful morning; a bit more windy and the water a little choppy.  But today we would at least bring in a few fish.  I caught 3 small Crappie and a Gar Pike.  And finally Rich pulled in his one and only.........Also a Gar Pike.  I think mine was bigger - He says his was bigger!! 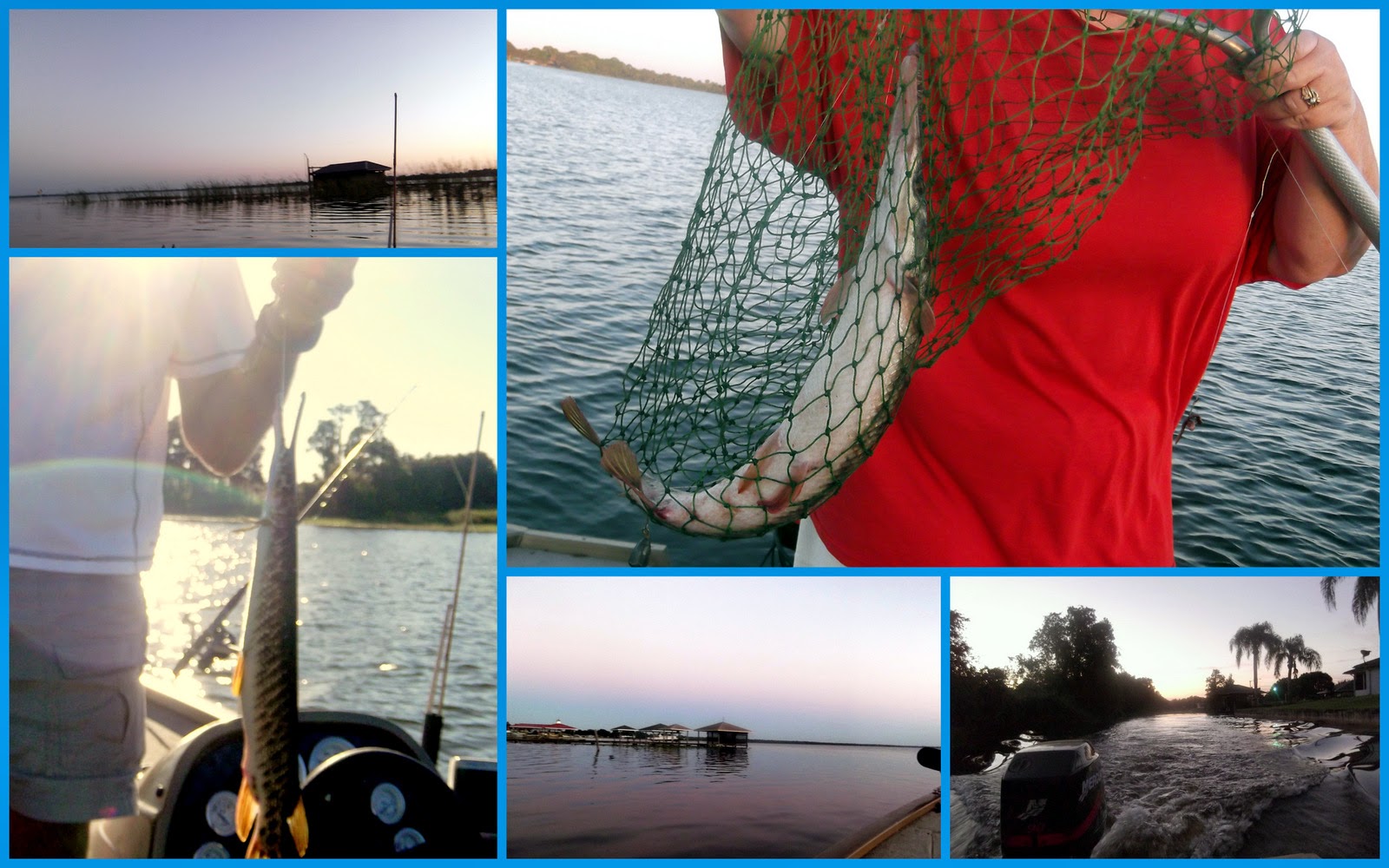 And this fellow made the morning a little more exciting.  There were a couple of times when he flew sooooo low, that we were sure he was going to land on the boat.  But it seems there were a lot of small minnows or fish near the surface near our boat, so this guy would come near the boat and just hang there waiting for the right time to dive and catch his breakfast.     They really are beautiful birds though. 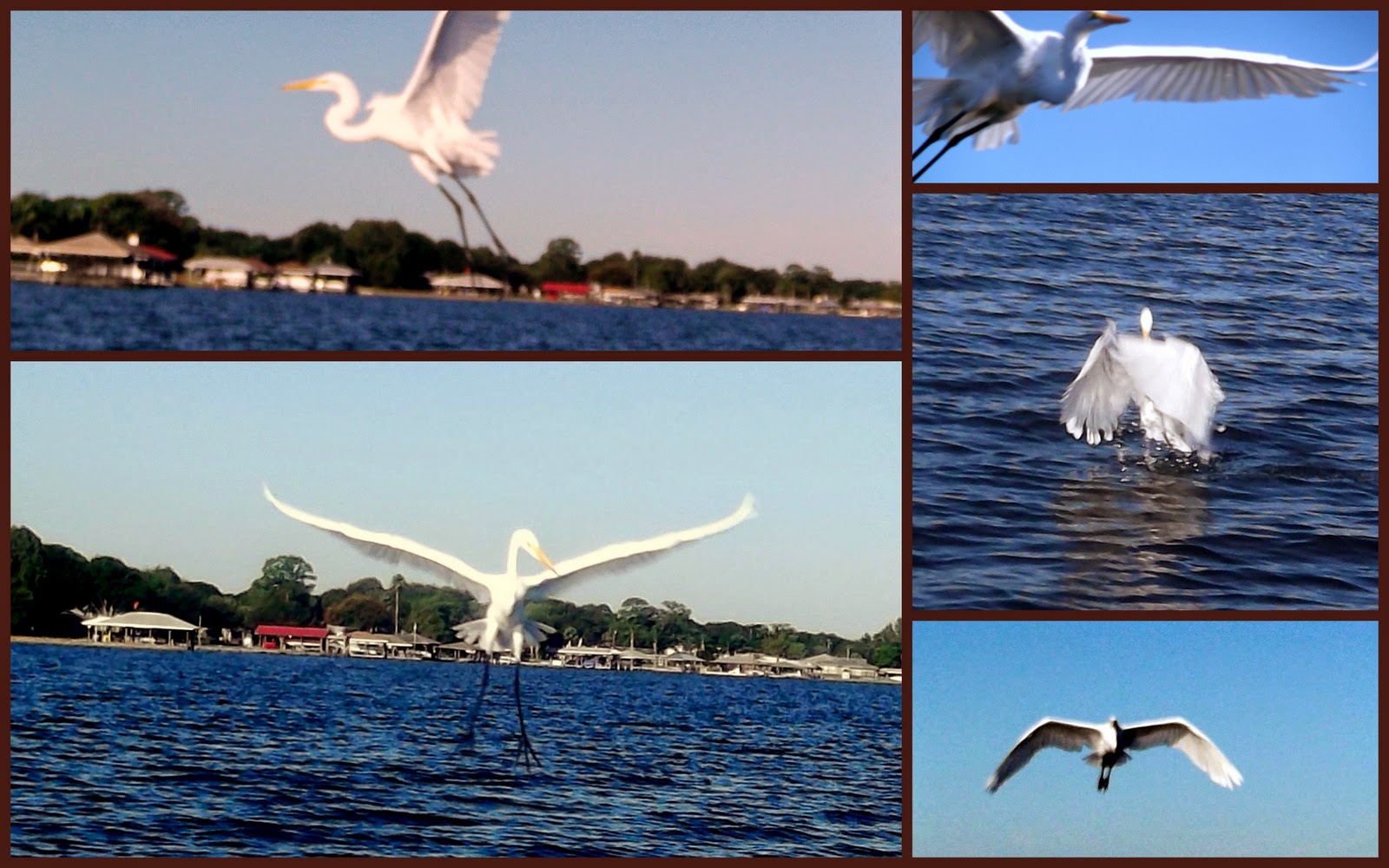 Maybe we'll get back out some evening this week.  We'll see.  But it was really nice getting back out there, relaxing, fishing and enjoying the beautiful weather.

A Weekend of Hard Work!!

Last weekend was our trip to Ft. Myers, and the weekend before that it rained both Saturday and Sunday.  That means that no outside work has been done in a while, save for the great lady that mows our lawn each week!   Nick and Tonyia invited us for a cookout and games on Sunday, but after much debate we decided that since the weather forecast was good, we had to spend the weekend getting some much needed and much past due work done outside.

So............Rich pulled out the power washer and finished the remaining two sides of the house AND the walkway from the house to the dock/boathouse AND the entire boathouse!  He spent both Saturday and Sunday completing the mission.  Unfortunately I snapped the picture before he finished the drip edge on the dock house.......but once done everything was sparkling clean and really looked great! 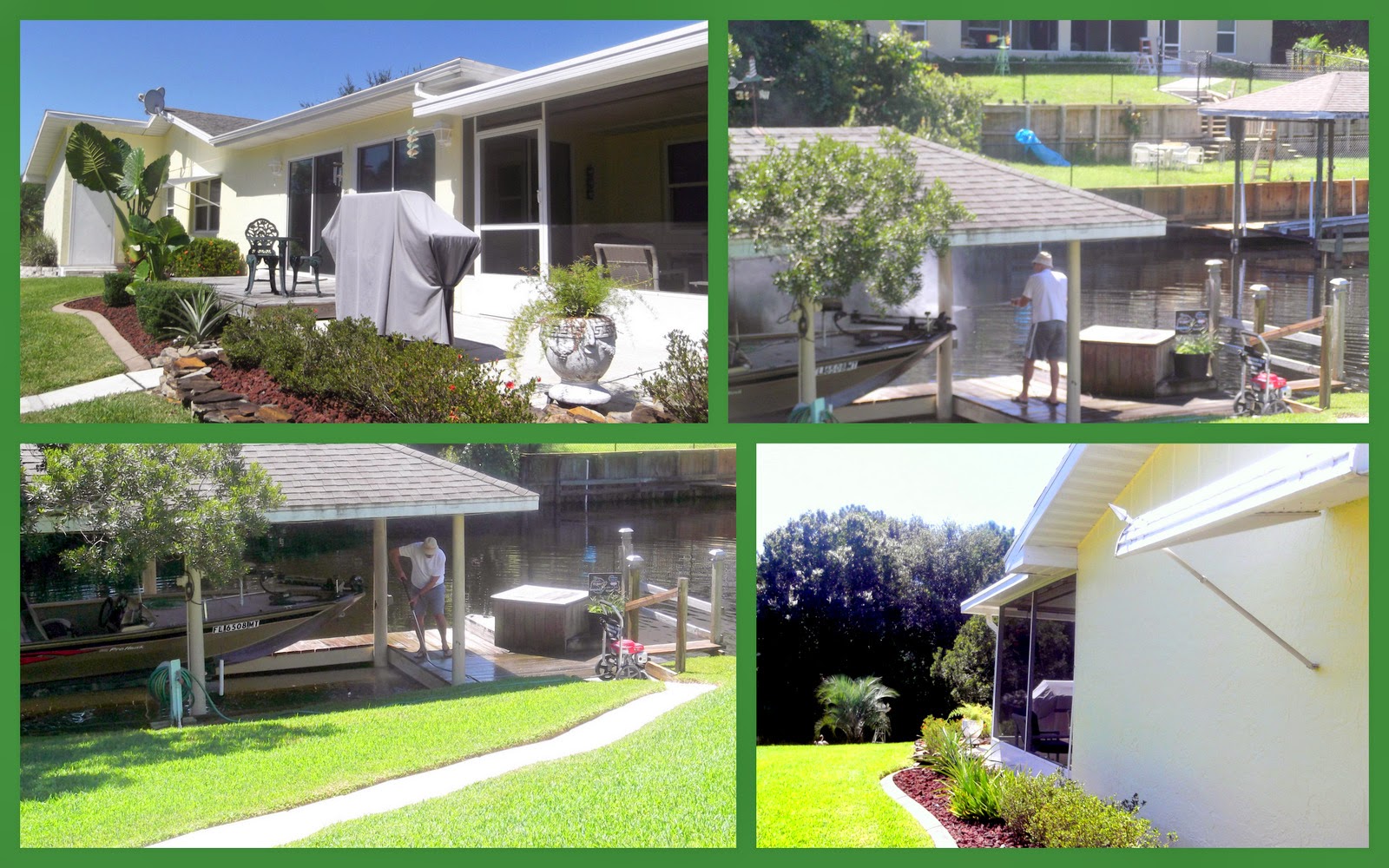 What did I do????  Well I was the go-fer.  I turned the water off/on and the power washer off, and I brought Rich coffee or a cold drink when I knew he needed it!!!   Actually (yes, I did to all that!) I pulled some weeds and trimmed the dead leaves from that elephant plant in the back yard, washed windows,  rearranged some shelves in the garage,  cleaned the front porch, scrubbed the kitchen floor, cleaned the closed in the office and sorted and filed a lot of papers.  And I made a meatloaf dinner on Saturday and Chicken and red potatoes on Sunday!

Rich was up before me this morning and I heard him in the bathroom............and then I heard the pill bottle.  He rolled out of bed (literally!).............all that work the past few days had really got to those back muscles.  So today his best friend is the bottle of Aleve!!!