The older we get, the more it seems we see the doctor.  This past week we both had doctor's appointments; Rich - with the gastroenterologist in preparation for his upcoming roto-rooter! Me, the annual glaucoma/cataract follow-up.   Rich's appointment was a late afternoon one, so we took advantage of the trip to Sebring to have dinner........where else?  Yes at the Hibachi Grill! 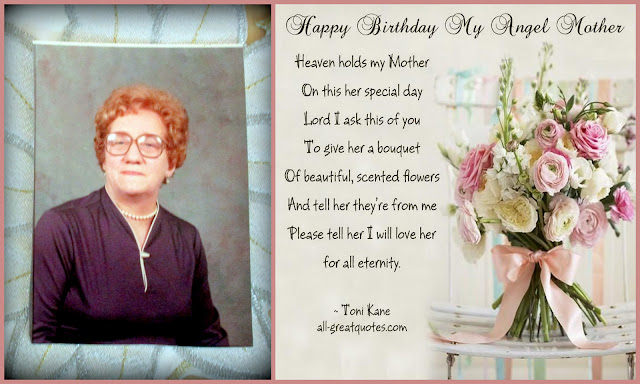 The 24th was also an exciting day for the family. Dennis and Crystal made the trip to Iowa City.... It was  "Next Stop- Iowa, Admitted Student Day.  Both our granddaughter, Chauna and her boyfriend Ryan will be attending the University of Iowa next year.  Today was introductions, briefing and campus tour for Chauna and Ryan. 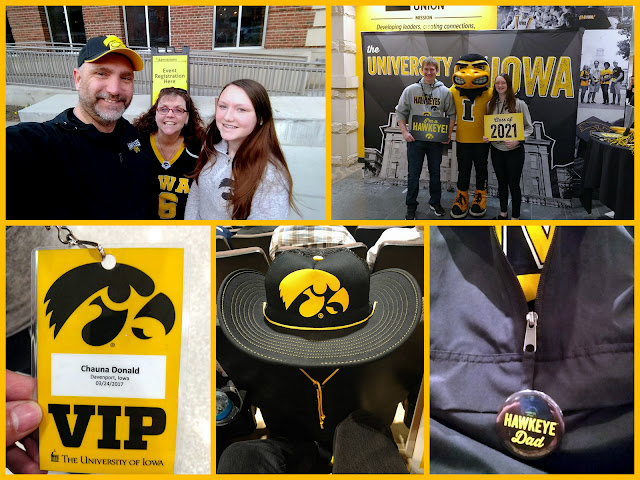 They all stopped at ( including grandson, Dalton, and his girlfriend, Sara, who both already attend the University of Iowa) the Zombie Burger and Shake Lab, in Iowa City for dinner.    Being an avid follower of The Walking Dead, I'm sure this was more to humor Dennis than anyone!!! 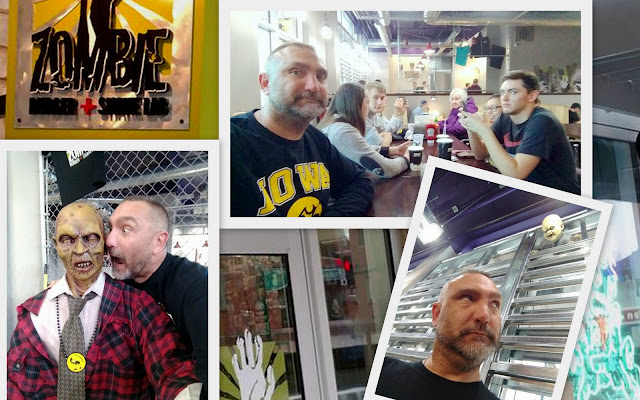 On Saturday evening, the two guys across the road came over for dinner.  Tom and Mike are snowbirds from Illinois, who rent the house across the street for the winter months to fish on Lake June and the surrounding lakes.  Except for a fish fry, neither one of them cook, so they eat out just about every single day.  They leave to go back north next Sunday, so Rich invited them over for dinner.  At "their" request I made Linguine with sausage AND meatballs, Caesar salad and garlic bread.  I had made a Butter Pecan cake with butter cream icing the day before.  They ate so much, there was no room for dessert - so we sent them home with cake for their mid-night snack!   Really nice guys.......we had a fun time. 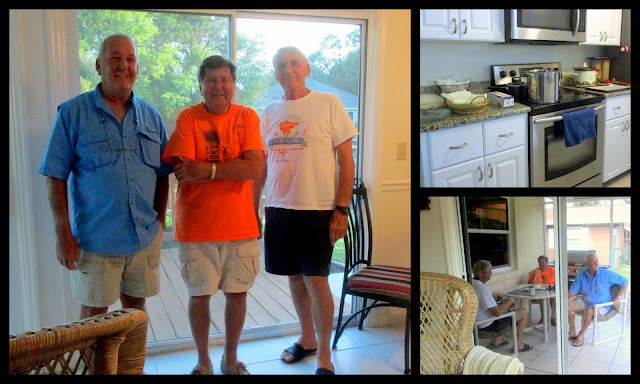 Next week is another doctor appointment.  This time I'm seeing the foot doctor to see if he can figure out what's going on with my heel!
Almost two months to the day - and we'll be on our way to Iowa!  Can't wait to see the family!
Posted by DDonald at 2:45 PM No comments:

Good friends, and highschool buddies of Rich were in town for the week, staying at the Thousand Trails Peace River campground in Wauchula.  We always try to get together, even if it's just for a day or an afternoon..........  So on Sunday, we spent most of the day with Cliff and Carlene Freeman.

PIctures below:  Both of them looking great......and so is our good canine friend, "Buster"!    Lots of medical issues for both of them over the past year or so, and Cliff, unfortunately, was just diagnosed with Parkinson's. 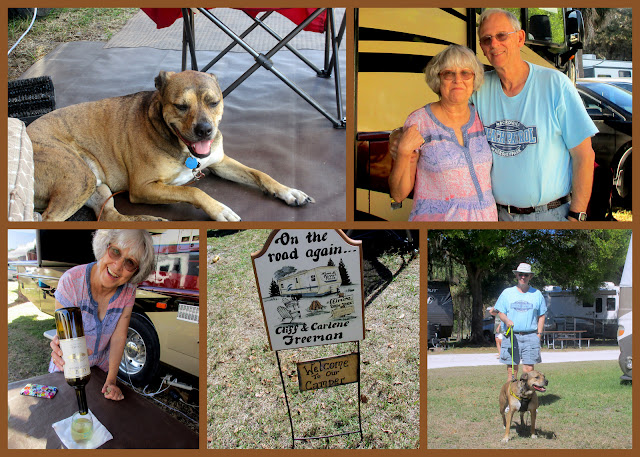 Carlene and I shared (and finished) a bottle of Chablis!  She made an excellent pork roast, potato salad, asparagus and fresh "ugly" tomatoes, with a side of fresh strawberries.  All that after chees and crackers with sliced salami and pepperoni and corn chips with spinach and artichoke dip!   Rich and I brought the dessert: fudge brownies with peanut butter icing and oatmeal chocolate chip cookies....complimented with a dip of vanilla ice cream!  Needless to say - everything was awesome! 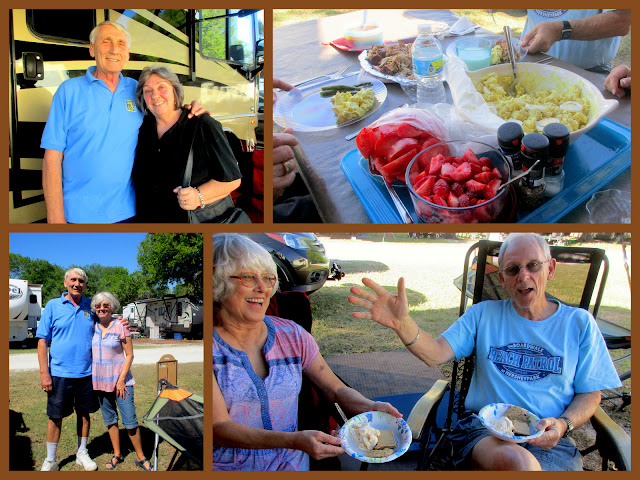 Rich and Carlene (then Baily), better known as Beatle Baily,  went to highschool together, and will be celebrating their 50th class reunion in September. We will be back from our NY trip by that time, but are considering going back up for this event.  We'll see......

WOW - Can't believe it's been nearly three weeks since I've updated here!   And not a whole lot going on.  I've been trying out more new recipes; some good, some, not so good.  The Pineapple cake was quite good, as was the new Shrimp Scampi recipe.........However the White Trash Hash.......... well let's just say it was more trash than anything else!  Not one we'll make again.   Other than that, just the same old, same old......... cooking , baking, cleaning, laundry, groceries, weeding. 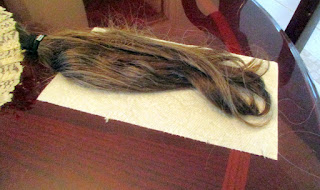 I finally broke down and got my hair cut.  That's something I've been going to do for better than a year.  Had enough cut off that I can have it donated.

Only been out to dinner ONCE in the past three weeks!  Met up with Buddy and Diane at the Hibachi this past Tuesday.

On Friday, Rich and I decided it was time to get out for some entertainment, so we headed to Orlando. A quick stop at McDonald's for a late lunch on the way, since dinner wasn't until after 8:30 that night.  We got a good deal through MyMVP Collection on a room at the Clarion Suites Maingate in Kissimmee.  Very very nice hotel..................We ended up with an upgrade, with two queen beds, a sitting area w/sofa, and desk, microwave, refrig, and a huge bathroom for just under $69 for the night.  Regular price ( including the  morning buffet) would have been about $100 more!

The morning buffet included eggs, bacon, sausage, home fries, toast, bagels, fruit, cereal and more with  table and bar seating in the immediate area, and huge outside seating area, and more tables set up in the lobby.  Very impressive. 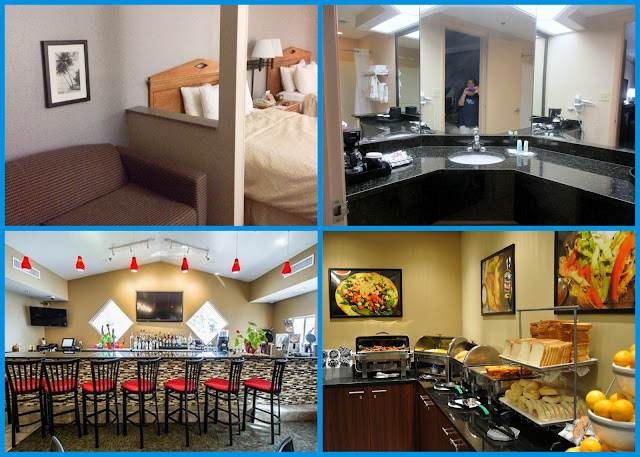 The hotel was immaculate inside and out, with the grounds maintained very nicely.  Huge pool and sauna, and shower pool, with bar outside.  Hotel is 100% smoke free, with a couple of smoking areas set up outside. 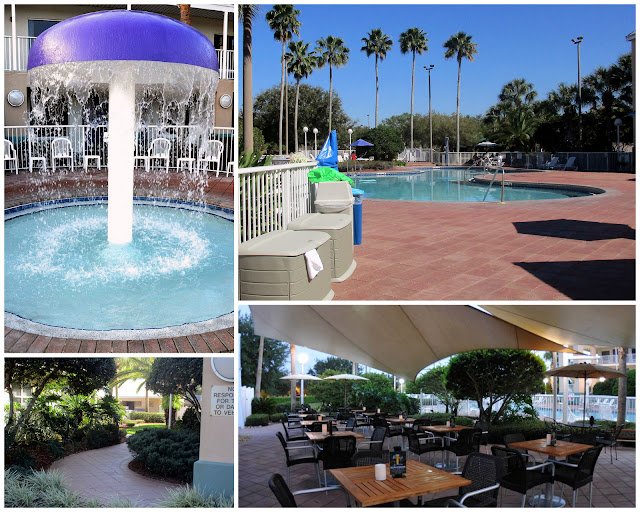 It was about a 20 minute ride into Orlando to the Treasure Tavern, just off International Blvd, arriving about 7:35 for dinner and show that would begin at 8:30.  They seated us about ten to eight, and we were so glad when they gave us table 8, which is where we sat our first time here.   Ruby was our Jewel (waitress, singer, dancer) for the night and we ordered a bottle of Pinot Grigio for the night.
( Well - Rich had one glass, and I finished the bottle.   Below are tons of pictures of the show - which was absolutely excellent, once again.

Below:  Checking in...  our waitress, Ruby,   Madam Gretta and here Jewels opening number, and the first act of the night - the hula hoops.  Excellent. 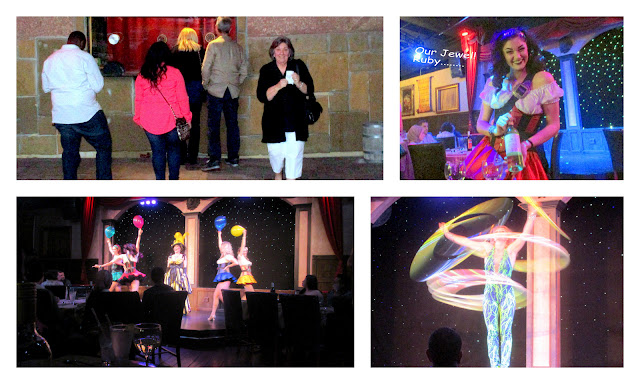 Audience participation, and Jinx, the special "jewel" joins in.  ( She is hilarious!, along with a few guy's ( comedians). 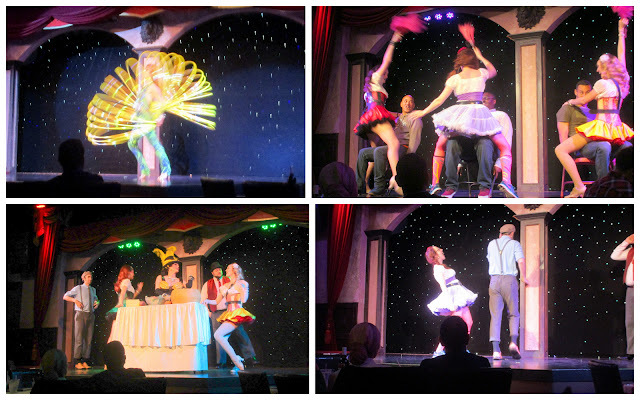 The  Russian acrobat/contortionist,  singer, and more laughter with Jinx.  By this time they were beginning to serve our meal.(as the show continued) Mushroom and Brie soup, salad, main course ( I had chicken, Rich had Surf and Turf) and cheesecake for dessert.  Food was OK...... 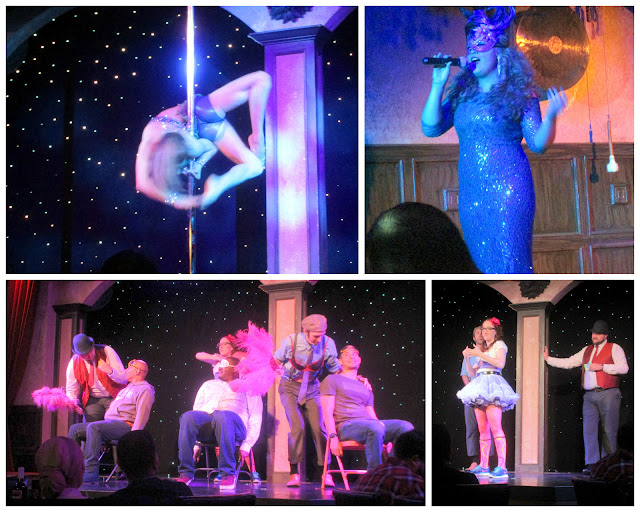 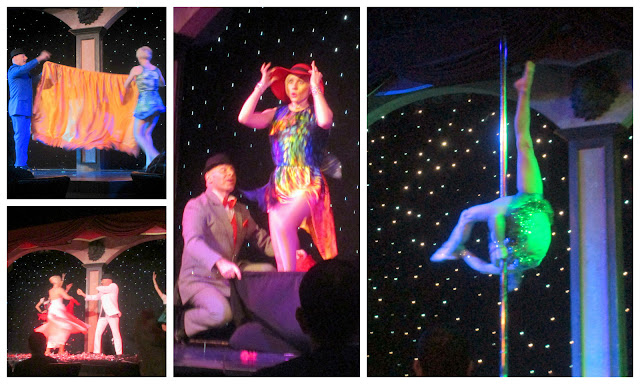 And then just more singing, dancing, laughing and clapping!  The entire show was excellent. 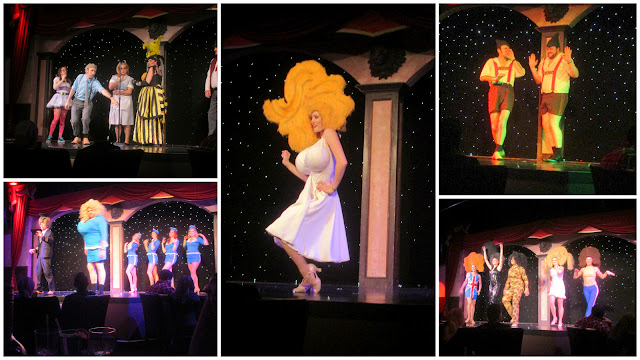 And then we headed back to the hotel and it was after midnight before we got to bed.

Got home today, early afternoon, unpacked, showered, took meat out of the freezer for dinner, and started baking.

Tomorrow we are meeting up with Rich's friends from high school over in Wauchula for the day, and I am bringing dessert.  Rich had made another batch of his tagalogs, but we were down to the 1/2 dozen.  So I made up a batch of brownies with peanut butter icing, and a couple dozen oatmeal,chocolate chip cookies.    Looking forward to seeing Cliff and Carlene ! 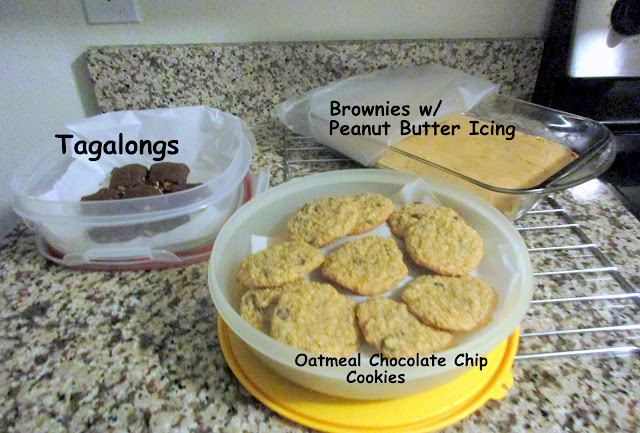 WOW -  This is one of those things you were absolutely sure you took care of......but didn't!  No worry though, while this birthday greeting is a bit late....we did share our best wishes on his special day.

February 25th was our son Dennis' birthday!  Happy Birthday to an awesome young man, a wonderful husband and father and a son we are so very proud of! 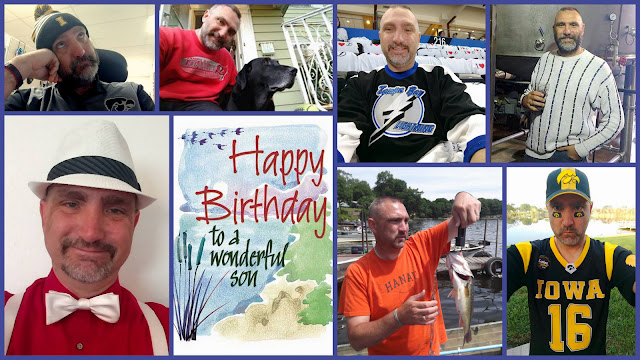 Not too much else going on............we'll schedule something for sure this weekend........even if it's just a trip to Sebring to do some shopping!  In the meantime, the pineapple has ripened,  sliced and almost all eaten!  The top has set and dried for a week, and today we put it in water to root.

Rich, instead of me, did the baking this past week, making a batch of chocolate, peanut butter cookies.  Actually they are supposed to be very similar to the Girl Scout Tagalong cookies, and call for a shortbread cookie, topped with a peanut butter/confectioner sugar icing and dipped in melted milk chocolate.  While they were very good, they were very very filling........Next time: a smaller cooker, and melt the chocolate longer for a thinner texture for dipping.! 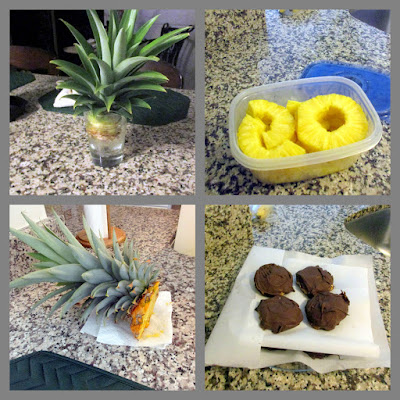 Posted by DDonald at 7:42 PM No comments: