Last Friday Nate and Krystal headed for Virginia to spend some time with Nate's family. They tried to head out of town without letting us know, but we cornered them alog the road on Thursday only to learn that Ava was not going with them.........and because they did not want to ask us to take her for a couple of weeks had made other plans for her. But we assured them that Ava was welcome and we'd love for her to stay with us.

She is making herself right at home.

You are starting to tire me out!  And I know I'll get a treat real soon if I continue to amuse you! 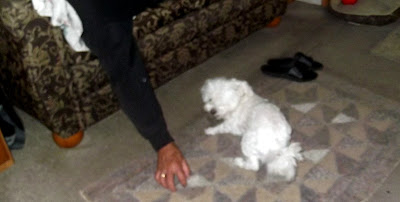 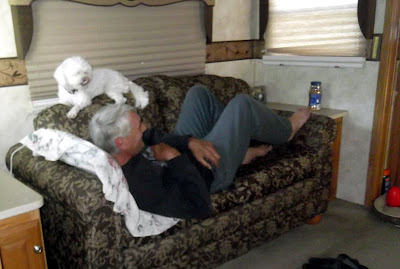 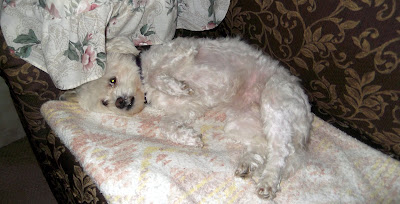 Let me rest.......then I'll get Aunt Donna to take me for a  little walk along the nature trail!  Life is Good

On Saturday there was a couple of pickleball tournaments going on; one in Punta Gorda and the other over in Sebring.   Rich and I did not go - but want to extend a big CONGRATS to all of our RV friends who were winners!   I'm sure I will forget someone, but Way TO GO to:   Rich, Dean, Rene, Buddy, John, Mark, Jack,  Dee, Carla, Diane, Marlene, Carol, Nell, Donna, Marie and Chris. 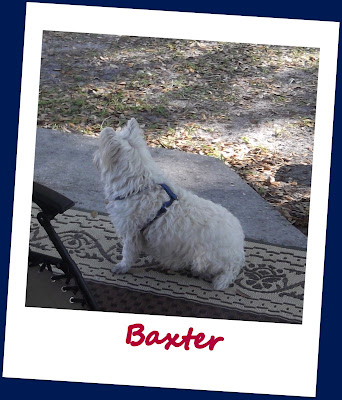 There were several others who played, had fun, but did not come home with a medal.

We had Baxter, while Travis was playing in Sebring.

Here is where Mr. B (Baxter) spent most of the day; watching for the squirrels.

We never pass up an opportunity to open our RV to our canine friends!

At noon the park was putting on it's end of season party for those of us left in the park.  Hat's off to the staff who did an excellent job!  The park provided a  "free" lunch  and great music for everyone.  Lunch was 2 hot dogs, beans, chips and dessert ( cream puffs or cheese cake) with your choice of beer or soda.    Most people brought their folding chairs, but several tables were also set up.  Each person attending also got 3 tickets that they could use for the raffle of several very nice prizes including daily, weekly and monthly stays at various RV parks, 3 beautiful wine baskets, a pooch basket, and a key lime cake.
Congrats to Ray and Betty who went home with TWO wine baskets!

The only thing that ruined that day was that the manager ( who usually is nowhere to be found on the weekend) showed up and got everyone confused when she started to talk!  Annuals in the park will have their own drawing, yes annuals can be included in the drawing today, no we won't draw the winners today, yes we will draw the winners today!!  It was when she made her way to the dance area an embarrassed most of us who were there with her most unprofessional, un-manager like tacky dancing.  Definitely time to leave!! 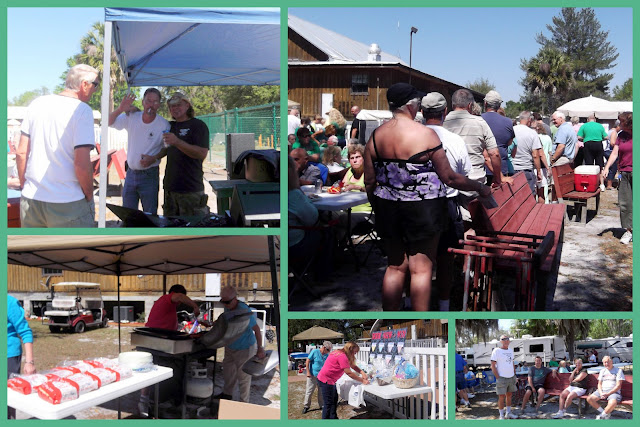 Harley - who was the DJ, singer/entertainer at the party played well into the afternoon, which was great.  As a friend of Nick and Tonyia he came down to their site later in the day and set up his equipment.  He entertained us with his guitar, singing and also playing the Electric Slide, the Chicken Dance and the Cupid Shuffle - as we all danced around the campfire.   Nick and Tonyia made sure that the music was not disruptive to others in the park, and the only noise anyone may have heard was our applause after a great song or a fun dance!   Even one of the park rangers, making his rounds stopped for a minute.  We wanted to make sure we were OK with the music and he told us that Quiet Time is 11:00 PM - so "party on!"    Anyone walking by was welcome to stop and many did......at one point I think we had about 26 people there. 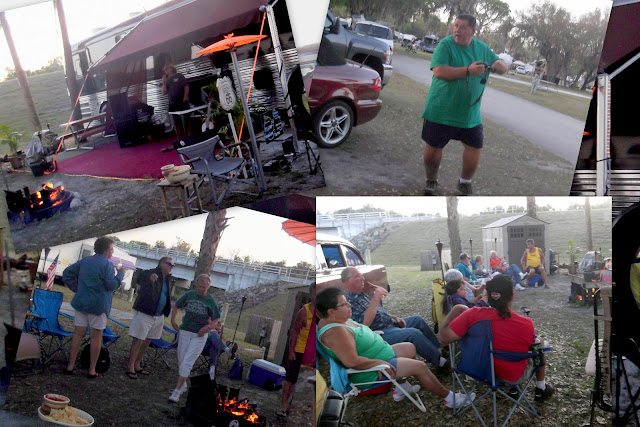 But about 8:00 PM - the park manager ( and she wasn't even in her pajamas this time) stopped by tell us we were making too much noise and we had to shut down.  Not even a guitar!  When everyone complained - she allowed Harley to play the guitar and sing.    What was the most surprising was that about 30 minutes after she shut us down, one person made a call to the office to see if it was alright to have music at their site, etc. etc.  They were told that "quiet time is 11:00 pm, so there is no problem.  Would be nice if the manager shared her "new rules" with her staff, don't you think?

Now can you imagine how many of us would have been at the happy hour if all of our pickleball players were not at the tournament?  We were all a little confused as to why the party was shut down so on Monday Nick went up to the office to talk with Lee.  Don't know anything about that conversation, but he did say he  spoke to Sheila (Lee's boss)  after he got back home from meeting with Lee.  Sheila informed him that 26 people on his site was UNACCEPTABLE!  He said he asked Sheila what would be acceptable and she declined to say.

So a warning to all of our pickleball friends who have SEVERAL parties during  season with 30 or 40 or more people at their site, with singing and Guitar playing.... remember that while we don't know what the acceptable number is - you can NOT have 26 people at your site to have a fun happy hour.   What is even more interesting is the number of times THIS SEASON and LAST SEASON  that our park manager attended these happy hours where there were far more than 26 people, and never indicated it was unacceptable.

I do know that there are a couple more happy hours scheduled over the next couple of weeks.   You better believe that I will be there - if not as an invited guest - to count the number of people on the site.


And I though LAST SEASON was bad!!!
Posted by DDonald at 4:18 PM No comments:

Rich and I have both been down with the bug/flu or whatever is going around. I got it first and passed it along to Rich........ Actually, Friday evening was the first time in two weeks that I've been out and visiting with friends.

Friday was Judy's birthday, so we both headed over to help her celebrate.  It was a very pleasant evening - just right for celebrating.   Here's the birthday girl! 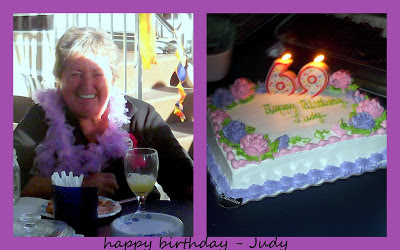 A few pictures of the crowd.   Lots of sunshine to start of the evening.  And the food tonight was an Italian Feast... baked ziti, lasagna, stuffed shells, speghetti, meatballs, sausage, salad and garlic bread........     and a birthday cake for dessert.    We both love Italian food - but the virus we've both been fighting didn't allow us to enjoy as much as we'd like.  I had a couple of stuffed shells, with a teaspoon of sauce  and called it a night.  Rich, didn't indulge like he usually does - but managed a little bite of just about everything! 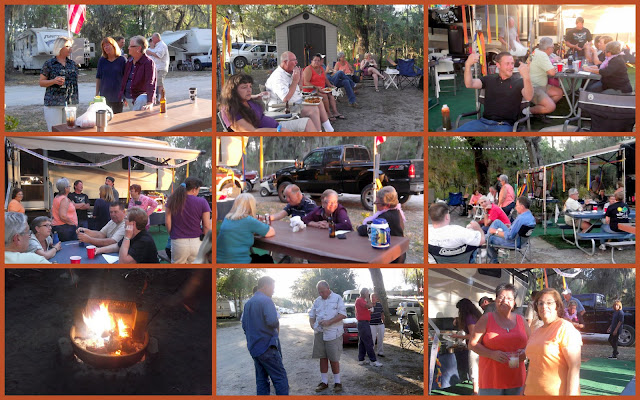 After the sun went down Jim lit the fire and some of us took to the Wii Fit and Wii Sports.  Below Tonyia and Rosa compete on the iceberg catching fish.... Justin joins Rosa for a game of soccer....and  I joined a few of the guys ( that's Larry below) in a game of bowling! 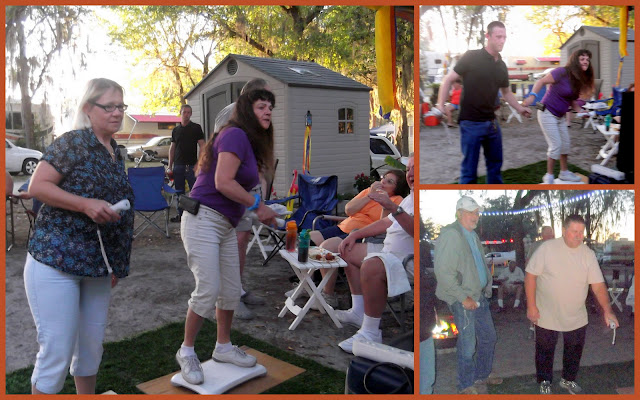 Happy Birthday, Judy!  We really enjoyed the evening of great food and fun!
Posted by DDonald at 2:04 PM No comments: