Well it looks like the cold weather is over........at least for a while.  Most of this past week was booking hotels, planning travel routes, and preparing for family gatherings.  Lots of things coming up! February is a family get together in Zephyrhills. Benjamin nieces and nephews from Zephyrhills, Plant City and Hudson along with our cousin Carol and husband visiting from Beaver Dams, NY. 💗 Then later in February a trip to Orlando to meet up with our son Dennis for Rich's Birthday.   And then our monthly get together with the Showalter's and Douglas'

In March, Krystal and I have a girls night out planned with dinner, followed by a an event at the South Florida Performing Arts.

In May we have 4 days scheduled in Orlando  at the Home 2 Suites, ( this is a FREE stay!) on our way to Cocoa Beach for a week.  Then in June  we are going to the Broadway Palm in Ft. Myers for my birthday and then we will head to Black Lake in upstate NY for six weeks. On our way back from NY we will stop in Elmira for the Benjamin Reunion, and then spend a few days with friends in Columbia Crossroads, PA.

In the meantime we are finishing up a lot of the comfort food.........Our neighbor, Diane, came over with some Butter Pecan Cake - that was a perfect dessert to follow the left over Chili!

Over the weekend we did a little cleaning in the garage, washed the car and FINALLY put the bench seat back in the car!  It has been covered and sitting on a piece of plywood, on the boat trailer since we removed it last MAY!!!  Not easy with someone as weak as me trying to help Rich maneuver that thing.  It's very heavy!!  It's not coming out again - we'll just need to find a way to make things fit!!

On Sunday, it was such a beautiful day, that we decided to just take the boat out for a ride.  A lot of houses still with blue tarps, waiting to get their new roofs, and so much damage to trees along the canal. Hurricane Irma did a job on all the foliage as well......... trees that were thick and shading, and usually dressed with Florida birds are now nearly barren and broken.  It will take a while to get the beauty of the area back. 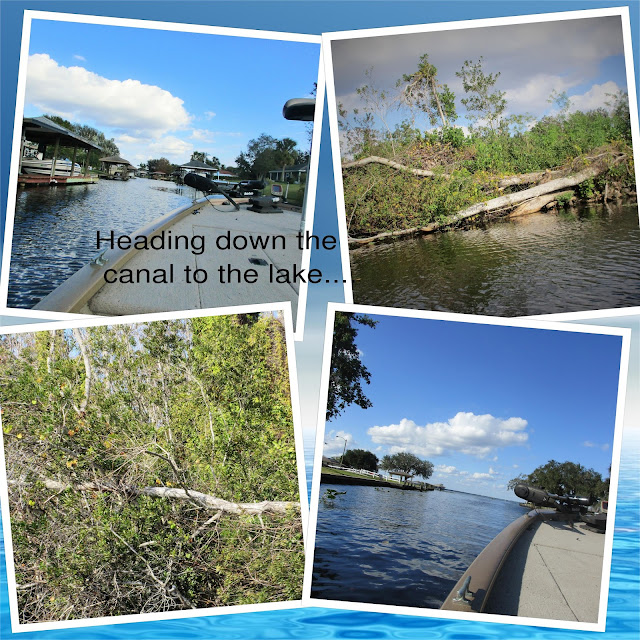 But it was beautiful out on the lake.   And this gave Rich a chance to check out how the motor was running.  He'd done a lot of work over the last month, new parts, fixing the gas line, and replacing the lubricant in the lower unit.  But today it was running great!! 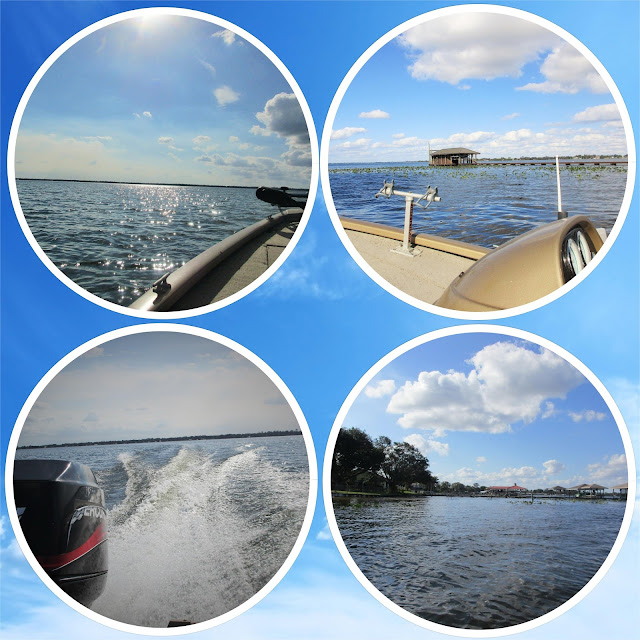 And then on the ride back before we reached the house we spotted a group of turtles sunning themselves on downed tree limbs and along the shoreline. No idea what kind of turtles they all are............but it was really quite a sight! 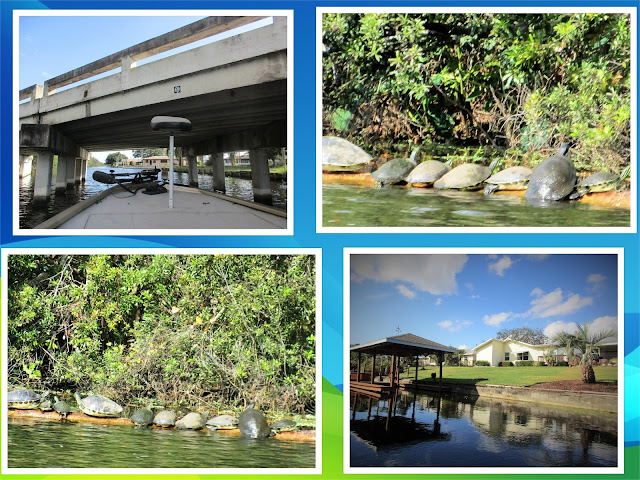 The backyard looks so strange with the tree gone that used to be down by the boathouse.  Hurricane Irma took that as well.
Posted by DDonald at 10:25 AM No comments: 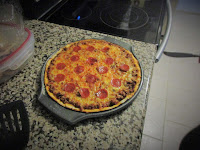 Not a whole lot going on this past week............I guess it's the slow down time after the holidays.  We've both been feeling pretty good though. It's 7:00 am as I write this and it's 49 degrees outside!   Yes the cooler weather is still here, and by
mid week it's supposed to get even colder. Chili is on the menu for Wednesday!  Last night it was Rich's homemade pizza! 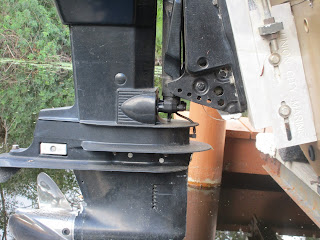 the maintenance on the boat/motor.  Can't believe I didn't get the camera out as he rigged up some 14 foot boards to make a plank so he could change the lubricant in the lower section of the motor!

Quite a contraption! 👀  That's when I call him MacGyver!😄

This has been a great week to enjoy mother nature!  Not just the weather, but the variety of birds to watch.  We continue to keep watch on the Blue Heron, nesting atop the pine trees, but a few days ago I caught a Anhinga down on the dock.  Love the way they twist and turn and stretch their necks.Was hoping to get him diving for a fish............ 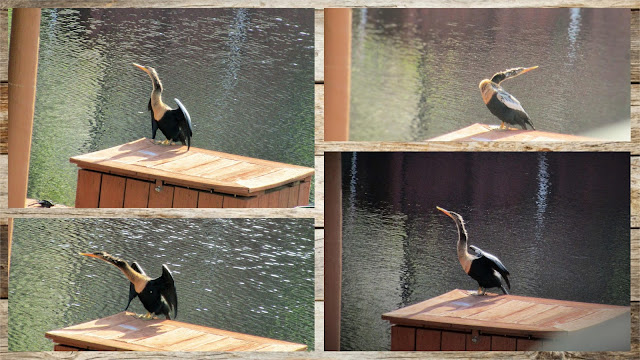 This is also the time of year when our camping/traveling friends start to arrive here in Florida, which gives us a chance to see them and spend time with them, if only for a short visit when they visit TT Peace River in Wauchula.  Our friends, "The Clowns" Bob and Laverne just sent us a message they were back in Lake Placid.  Unfortunately, Bob is scheduled for open heart surgery on Friday - so everyone keep him in your prayers.

Well the holidays are over, so we are getting back on schedule for our monthly get-together.  Tonight was dinner at the Hibachi Grill with the Douglas' and the Showalter's.  As always the food was good and the company was great.........but we all missed Krystal.  Unfortunately she was having one of her bad days and hope she's feeling better soon.   We did manage to get her in our picture!   Actually Nathan is holding his phone where a picture of her is displayed!!! 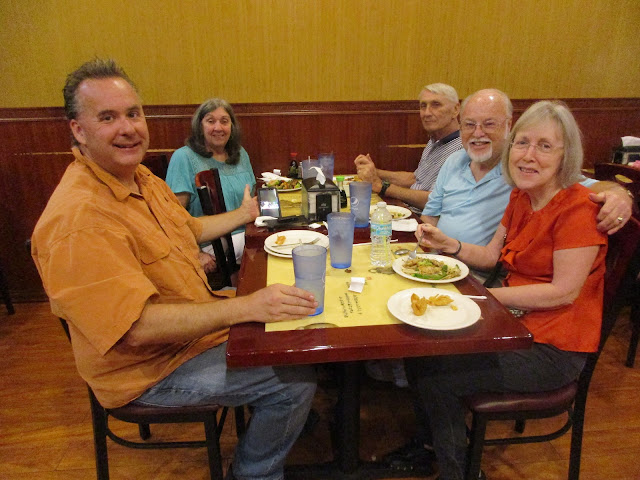 Well another batch of cold weather is headed this way for the next couple of day..... especially during the night!  Bundle up and stay warm! 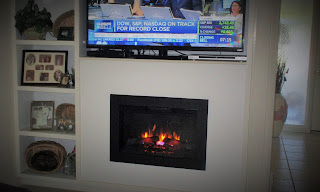 For the first time since we bought this house, back in September of 2013, we had to turn the furnace on. 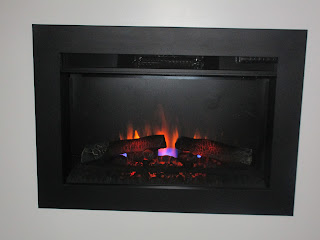 Last week and especially over the weekend the temperatures got down to the high 20's during the nights.  A bit nippy!   And so while sleeping,  we set the furnace to kick  on when the temperature inside reached 68 degrees.

During the days, or when we were watching TV in the evenings, we'd turn on the electric fireplace, and/or bundle up with the afghan!

But it only lasted for a few days.  We pretty much stayed in over the weekend, especially Sunday when it was cold and rainy most all day.  And so for the past week it's been a lot of "comfort" food; macaroni and cheese,  noodles and beef, goulash.......and left over cream of potato soup!  Mmmm. Good!

Monday was a beautiful day and so we were both getting some overdue yard work taken care of.  Tuesday is trash pick-up so Rich trimmed the palms, and trimmed the bushes in the front yard, and bagged all the trimmings.  We cut and bound the palm fronds and got all the yard waste out front for pick-up.  The toiled in the master bedroom started making this terrible screeching sound...... getting worse by the day.............

Wednesday morning I had an 8 A appointment with the Podiatrist.  And I was 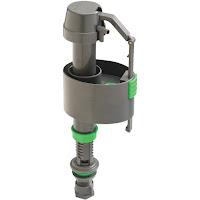 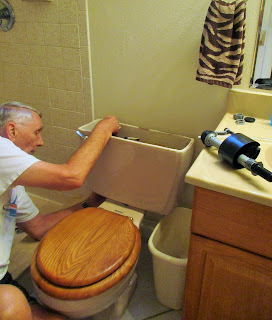 more than ready!  After working in the yard my back muscles were throbbing, as was my heel.   Actually the foot had been bothering me for about a week - so I was very glad that today I would be getting my steroid shot!  In the meantime it was time for the toilet repair............so after stopping for a few groceries I made it back in time for Rich to make a trip to the hardware store for a new adjustable ball.... thingy..........!  Anyway this is what it looked like!  And the toiled is silent once again!

For the past week, maybe... we have been once again this year watching the Great Blue Herons making their nests.  They have one well underway in the same tree as last year........and there is another nest in the making in a tree just a bit further away, behind this one.  Rich has his binoculars out..........and I have my camera. The male flies off to gather tree limbs and twigs, and the female weaves the nest. 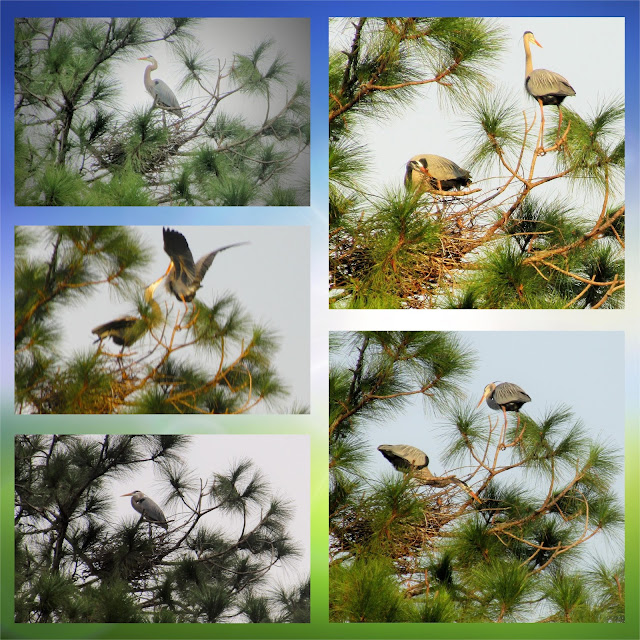 They are amazing to watch!

The new Bealls Outlet has their grand opening tomorrow where the old Publix used to be.  Just might take a ride down and see what it's all about.  Got a coupon for $10 off. 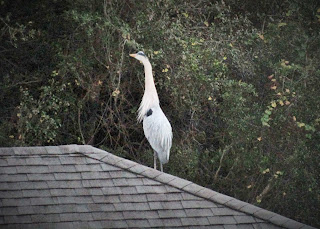 The week between Christmas and New Year's was beautiful.  While the rest of the country was seeing freezing temperatures we were enjoying cooler but comfortable temperatures and sunny days.

We've been watching the Blue Heron.  Actually there are three of them working very very hard at building their nests in the Pine trees. Amazing to watch them carry those large branches and place them so precisely.We think this is one of the young ones hatched last year.

But while the weather was nice ----- there was still work to be done, some of which was planned, and one that unexpected.  It took THREE trips to Home Depot before we finally had two with all the parts!!!  One was packaged wrong and was actually Bronze instead of White.... (1st exchange) and then returned that one because all the pieces were not in the package.   But.... Rich was finally able to complete the installation, and they look great and work perfectly! 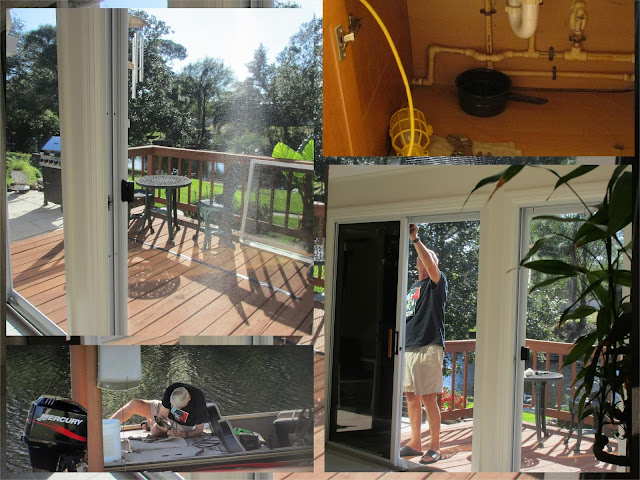 And - as you can see above....some repair work was necessary.  A couple of trips to the Marina for parts, and then fixing some problems with the gas getting to the motor,  But everything is running fine.  A little carpet repair and some warmer weather and we'll be ready to get out on the lake.

In the meantime - we had a leaky pipe in the bathroom.  A trip to the hardware store and some heat to dry things out and we're back in business!

New Years Eve and New Years Day was very quiet.  No champagne at midnight or wild parties.  We did enjoy a few adult beverages............as well as a delicious dinner - Cajun Chicken Pasta with Garlic Bread! 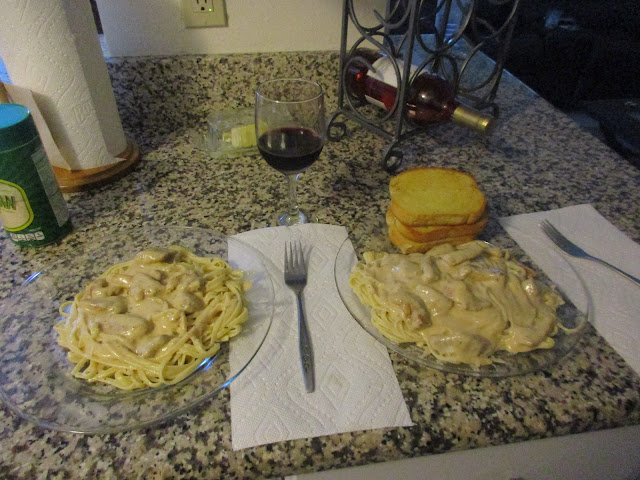 For New Year's Day - we took a break from cooking and baking and went to Golden Corral for dinner.  The steak was exceptionally good and tender.. and we both had seconds on the shrimp skewers!  And FINALLY I got to enjoy a piece of pecan pie!!

It's been clearing out left-overs in the refrigerator.... Used some of the Ham from Christmas to make Ham/Mac n Cheese casserole ( 1/2 is still in the freezer!).  Finished off the Shepherds Pie, and the Chicken Chili, and the last of the ham is going in the Cream of Potato Soup, which is what we had for dinner tonight, along with awesome Monte Cristo sandwiches!

Good news from our son Dennis.  He's scheduled for a week long conference in Orlando in February, and is staying for a few extra days afterwards.  Excited, because he will be here for Rich's birthday!  We'll pick him up in Orlando, spend the night in Kissimmee and go to Capones..  Spend the next day at home and then his Dad and sister Kim are coming here to pick him up.  He'll spend a couple of days with them before he flies back home.  Excited about spending time with him!
Posted by DDonald at 8:10 PM No comments: