Catching up on "family doings" and "family matters"

It's been a very busy month.  And I can't believe I have not updated this blog since Mother's Day!

Fortunately, Dennis and Crystal keep us posted on what they and the kids are up to.  Every time we get/see a picture of one of the kids we just can't believe how fast they are growing up.   But the family does stay active..........always involved in one thing or the other  - or on the go.

Here's Chauna  on opening day softball at Junge Park.  Great shots of her batting and catching!   This was back on April 28th and they won 9-4! 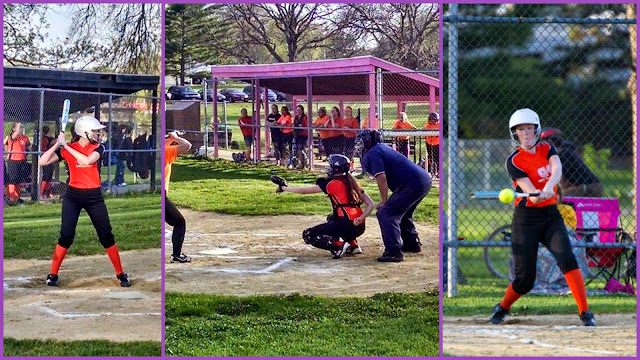 Next one is picture of the kids performing in the High School Band and Bettendorf HS - Final concert for large Group Music Festival.  Also pictures of the band's end of year performance and banquet where both Dalton and Chauna received their certificates, numbers and school letters after a very successful year for the school program. 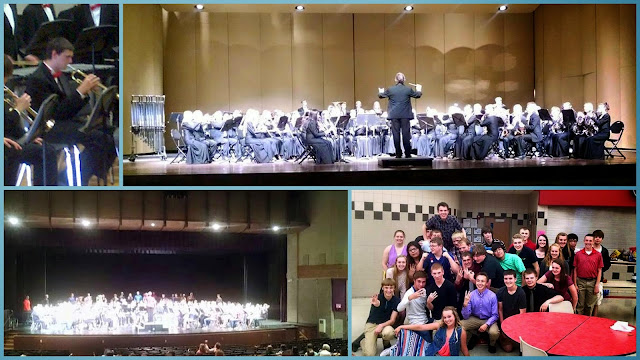 Earlier this month the guys took a road trip.  Dennis and Dalton traveled to Cedar Rapids, Iowa to meet up with "a brother from another mother".  They were meeting up with Willie Copeland who was stationed with Dennis about 13 years ago in Atlanta, GA.  Willie's son is the (MVP) quarterback for the Rapid City Titans arena football team.  It was also Hero's night for Military Appreciation, so they all took part on the field during the half time flag ceremony. 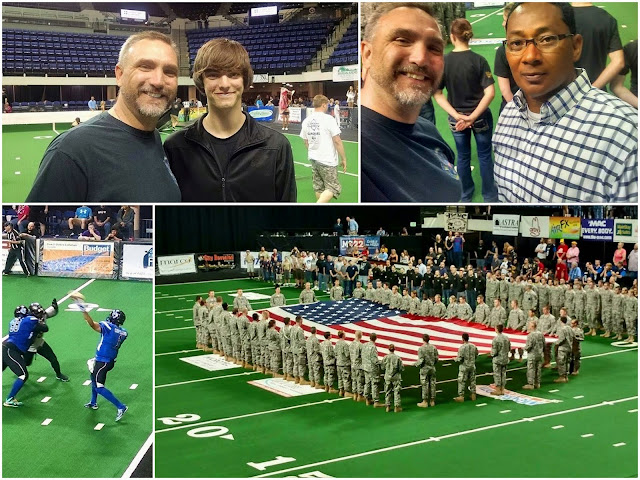 And then there was Chauna, celebrating with Dad, and fellow choir members/friends at the Banquet for the Davenport West Show Choir.  Yes - Dad just had to get that "selfie"! 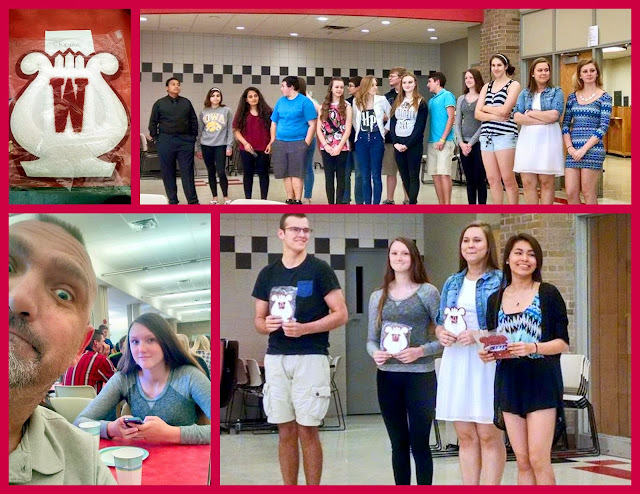 And then there was a new Car!  Dalton started working during the summer and has been saving every penny to buy himself a new "ride".    A very sensible choice for his first significant purchase.  He will enjoy this for sure.  And it should no doubt easily get him through his college years!  Congrats Dalton! 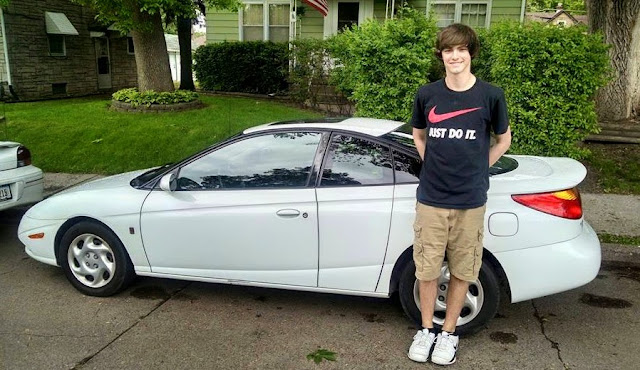 Meanwhile back at the ranch...............Rich and I (but mostly, Rich) have been very very busy.  Last month we met with the local Funeral Home and made/and paid for all of our "final arrangements".  And just recently we were with the attorney finalizing the  Final Will and Testament, Power of Attorney, Living Wills etc..............A lot of work, but necessary.

Trying to find anyone to do work for you around Lake Placid is not an easy task.  We had a guy come and look at the sprinkler system.  He said we needed to get a filter on our pump, and we needed to clean and/or replace and adjust several sprinkler heads.  He was supposed to come back and take care of everything.............. But it never happened - he never came back.

So Rich  bought a new filter and installed that on the old pump himself, dug up a lot of holes in the yard and replaced several heads, himself.  He pulled out a lot of unnecessary piping along the canal wall that was not needed and gave me a new/higher spray head along the side of the house.   And just when we thought everything was done,  he discovered, because of the dirt/sand that had surfaced between the cracks, there was a leak in the old line, UNDER the concrete slabs.  Forecast is for heavy thunderstorms tonight so tonight every thing is under plastic, and hopefully tomorrow this project will finally be complete!  He's been working so hard - and as always does "quality" work!  Me?  Well I'm still the gofer and I had to turn the sprinklers "on" and "off" when told to.  Tough job! 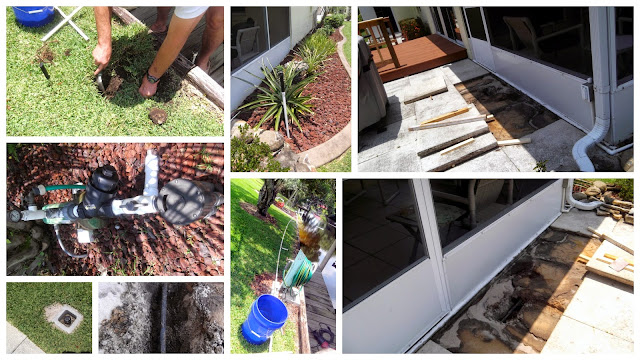 And then there was more "good news!"  We checked on the availability of a cabin for rent.............and Dennis and the family will again be vacationing with us for nearly a week this summer at Black Lake in Hammond, NY.  So excited.  We had an awesome time last year...............can't wait to see them all again.  Who's going to catch the "big one" this year?  And will I remain the Mexican Train Champion?   SOOOOOOOOOOO much to think about!

Posted by DDonald at 4:47 PM No comments:


Growing up I can always remember my Mom talking about the "most important thing in her life"...........her children, and how very proud she was of every one of them.  And so often when listening to Rich's Mom, she always said the same.... how proud she was of her two boys.  So here are those two special Moms, two beautiful angels that we want to remember today, with the only two pictures I have of them with their "kids".

And Mom, Edna with me and her two special boys, Richard and Robert. 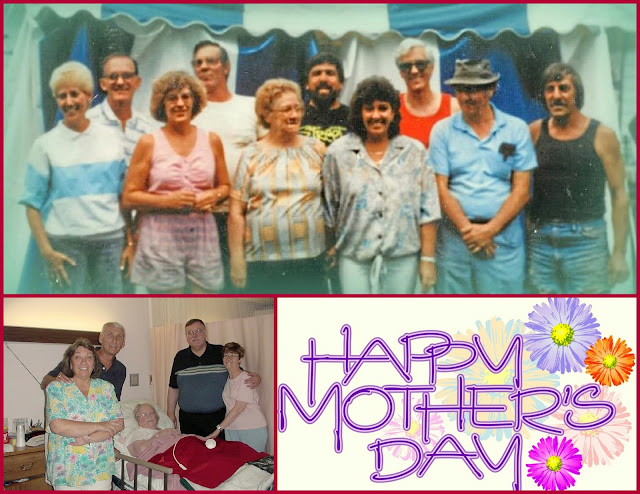 And we can't let this day honoring Mothers pass without recognizing another very special Mom in our family, our daughter-in-law, Crystal.    Below with Dennis and "Kids"  Dalton and Chauna.   A very special lady - we love you! 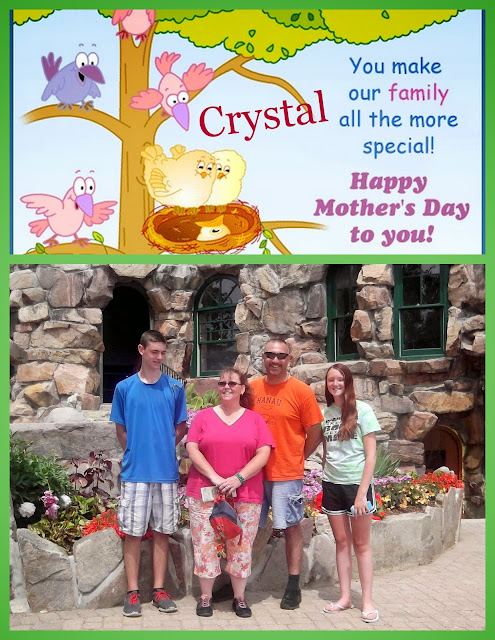 And like these moms, I have been so blessed and so privileged to have my 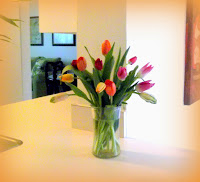 "son" in my life. I can not imagine loving any son any more than I do Dennis.

The flowers arrived yesterday, (and they are starting to open this morning!)  They are beautiful. Thank you Dennis, Crystal, Dalton and Chauna for remembering me on Mother's Day.  Love you all.

And today - I get to stay out of the kitchen!  I am dining out with my favorite guy!

Posted by DDonald at 9:14 AM No comments:

A Fun Day with Friends

But we were invited to Nick and Tonyia's on Sunday.......and we said YES! And we had a great time.  They also invited Harley and his girlfriend Sonia.  It's been a very long time since we've seen Harley ( Peace River - camping), and it was our first time meeting Sonia. 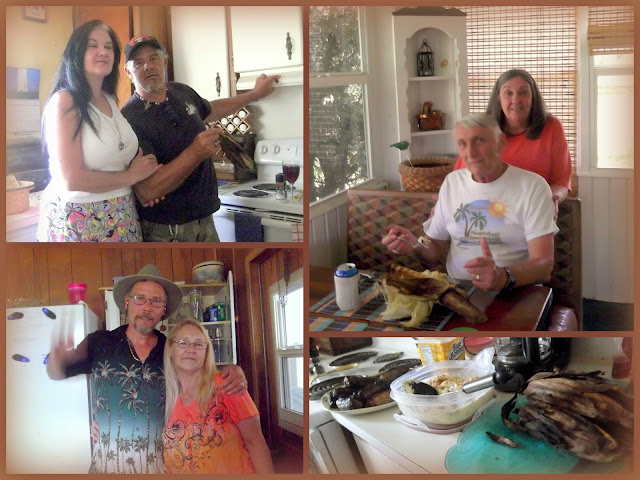 The guys hung out outside and according to Harley (on his trip inside for another Soda) it was an afternoon of "talking politics".   We ladies took to the kitchen table and  had elected something a little more exciting than politics; we introduced Sonia to our favorite game: Mexican Train.

Nick cooked the corn on the cob and home style ribs over the fire, and I had brought along a potato salad......and we all enjoyed a very nice dinner.  It's always a fun time when we get together with Nick and Tonyia, and today was a perfect example of just that.

Thanks for inviting us.....Thanks for the great food and good times! See you again soon.........PROMISE!