This has not been a real exciting week - but it has been a busy one. 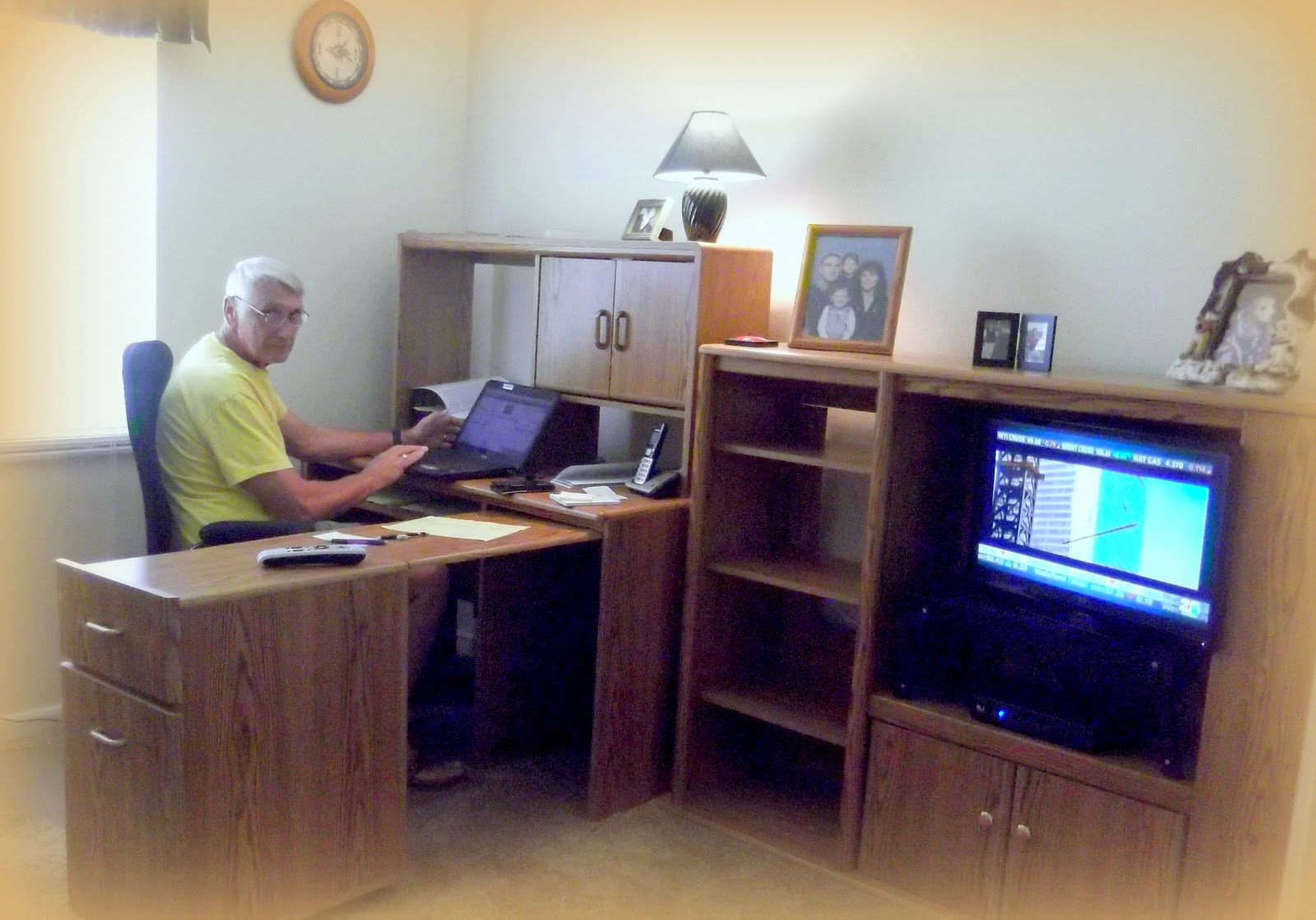 This is where Rich generally spends most of his days, Monday through Friday.  His trading platform open on the computer and  the CNBC channel on the TV.  But this week he did find a few more hours during the day than normal to sneak away..........

For me - this week was move the furniture week - to clean behind and under the sofas, dressers, beds etc.   I fertilized the flower beds and shrubs so it meant some extra watering each day.

But - while making a trip into Sebring one evening for door hinges we did find time to enjoy dinner at the  Hibachi Grill.  Love their Mongolian grill!

When able to take a break, Rich made a good amount of progress on the building of my secretary desk.   It's still in pieces - but it's coming together very nicely.  It should be ready in a day or so for me to paint the inside before he does the final assembly. 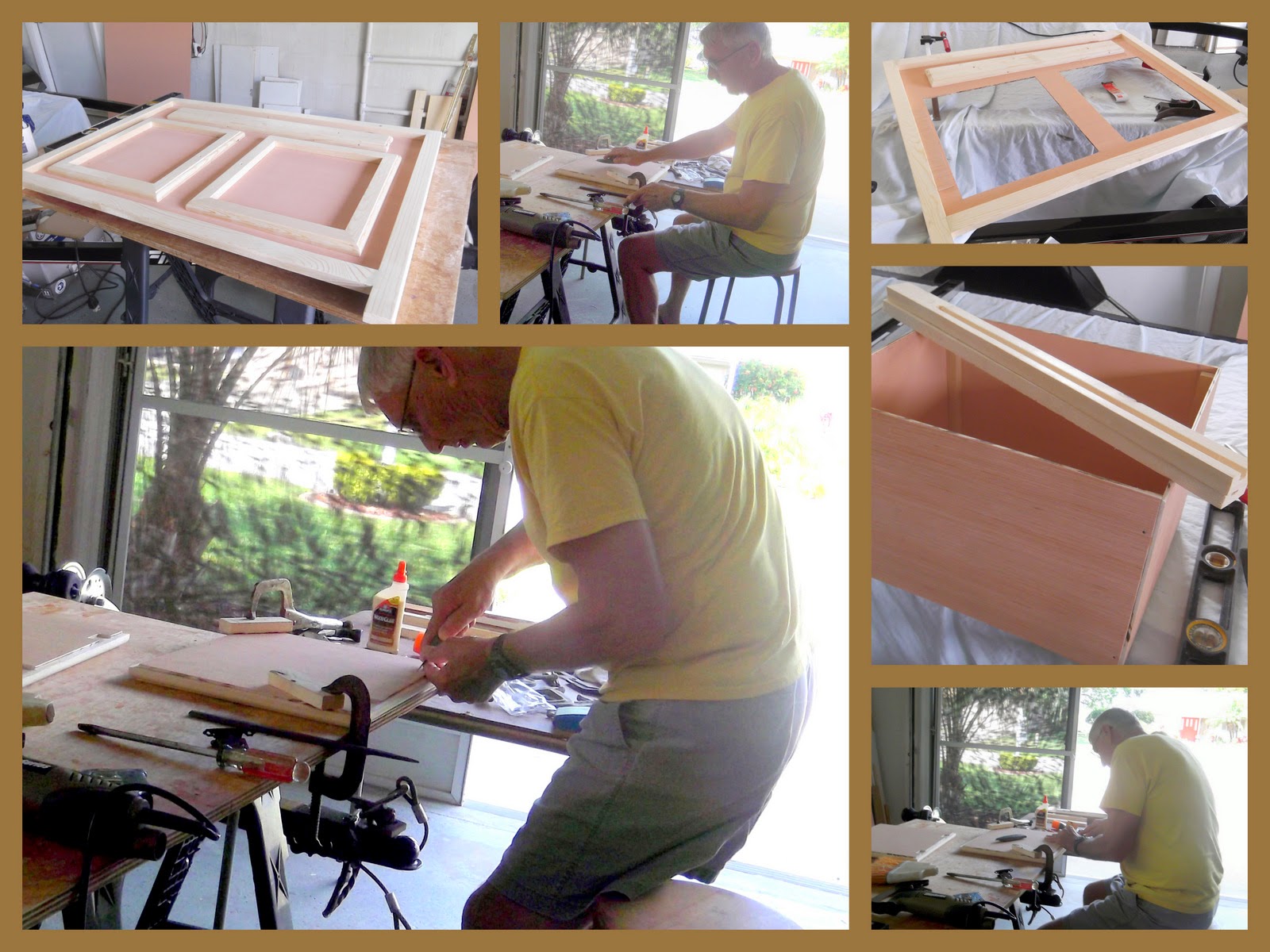 This week a Anhinga found his comfort in our backyard, close to the water's edge.  These water birds  are easy to recognize with there very long sleek necks (perfect for finding their dinner).  You'll often see them - like in this picture with their wings spread wide for drying.    And recently a paddle of ducks have made our yard and boathouse roof their home for several hours each day.   I got a real good close up of the ducks and was able to identify them as the Black Bellied Whistling Ducks  (Dendrocygna autumnalis).  The drake (male) and the female are very similar in appearance with red bills, pink feet, white wing patches and black bellies.  The head is brownish-gray.  Very much arboreal, they prefer to nest in natural tree cavities but I read that they will readily use nest boxes....  Maybe it was our nesting box in the yard that attracted them?? 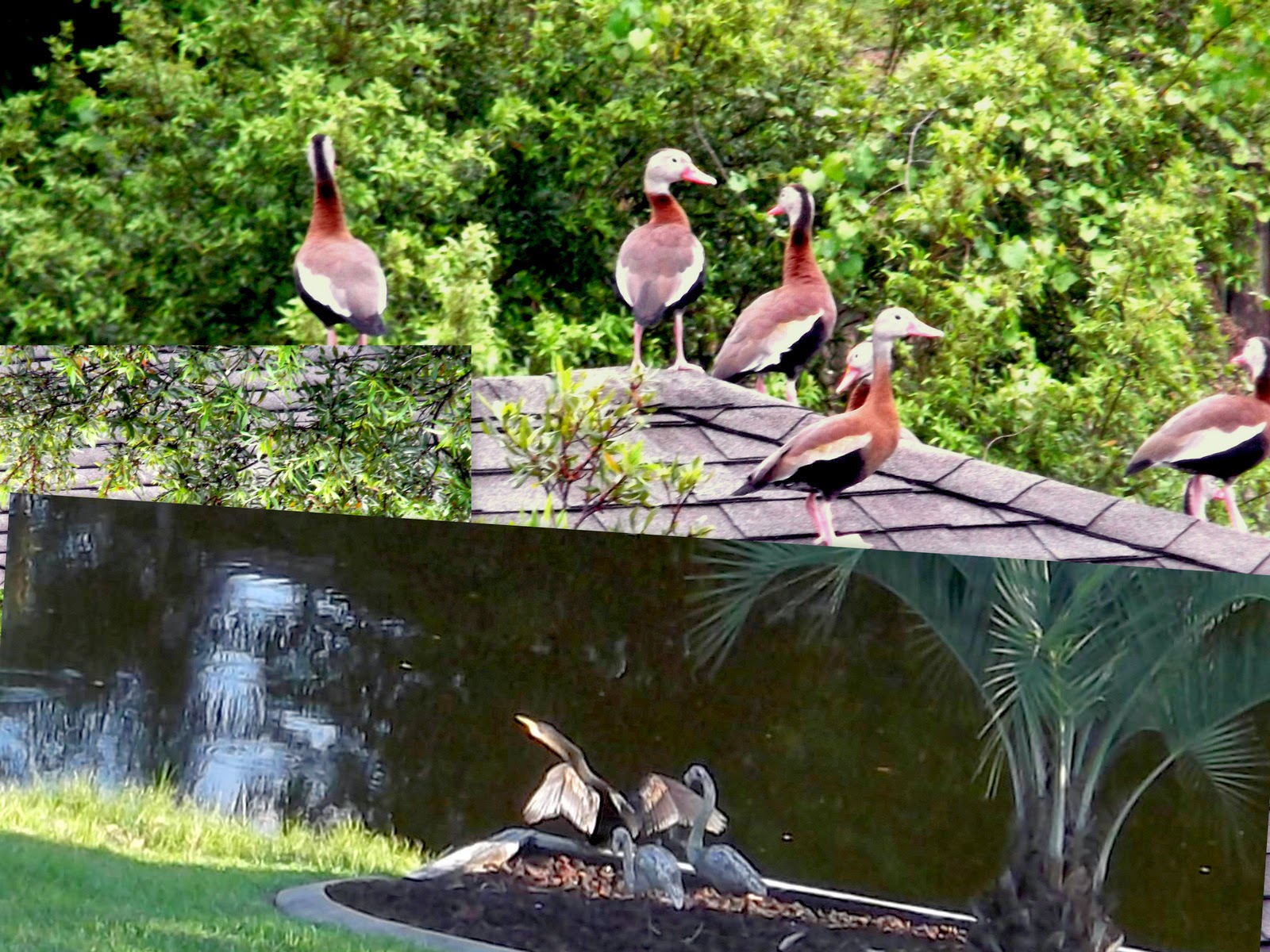 Posted by DDonald at 2:31 PM No comments:

On Thursday the grand kids left Davenport, IA., by bus for a field trip/extended weekend in Florida.  As part of the DWHS Falcons Band they were scheduled to perform Saturday in Orlando.  On Friday they arrived in Cocoa Beach and spent the day there.  Saturday morning was their performance and the rest of the weekend to be spent enjoying the Disney Theme Parks.

Our plans were to meet up with them at their performance in Orlando.  Unfortunately, someone compromised our credit card once again.  This time we had a call from our credit card company that an individual used our card at a Publix store in West Palm Beach and a little later in Lake Worth, FL.  What is so strange is that they actually used a physical card............. Seems that now they not only can get your information, they can also make counterfeit cards!

So......... without the card for travel/room, etc. we needed to cancel our plans.    This is a little of what we missed!  Our grand daughter Chauna performing. 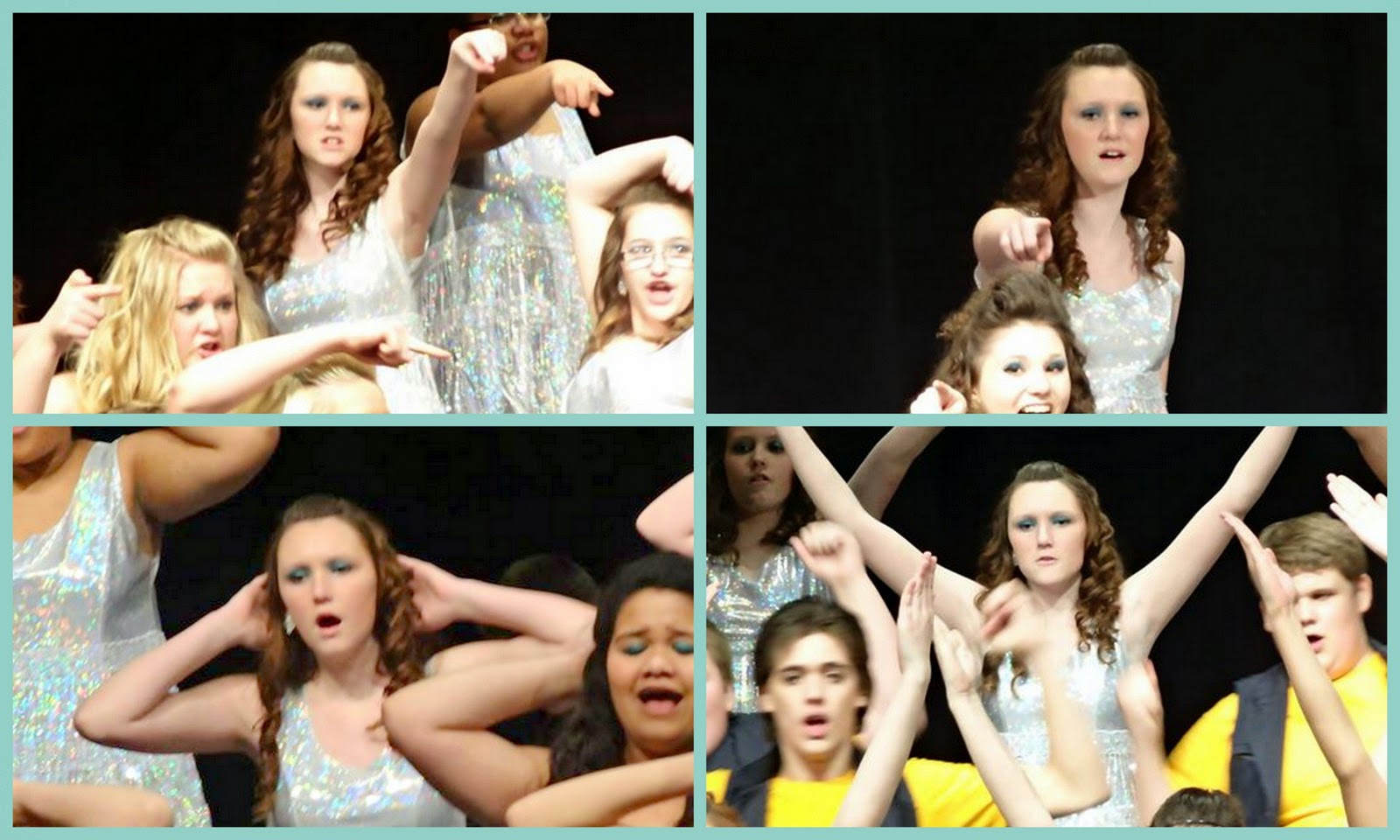 We took a short trip down to Sebring instead on Saturday and helped our friends Nick and Tonyia move from Lake Josephine to Lake Glenada  in Avon Park.  Nick drove the bus, Rich the truck/towing the boat and I followed in the car.  The lake is not as big as Josephine, but it's about 3/4 mile long and 1/2 mile wide and covers about 197 acres.  Nice deep lake though, with depths ups to 38 ft.  They have a great site that faces the water, and I'm sure the will enjoy the fishing.   Flames restaurant is also located on Lake Glenada - so won't that be a nice stop after a day of fishing. We didn't stay long, since they had a lot of setting up to do, but did make a quick trip to McDonald's to get them some lunch before we left.   Can not believe I did not have my camera with me!!

UPDATE FROM DENNIS ON THE ORLANDO PERFORMANCE:
Was just informed that the Kiddo's & DWHS band received the Superior rating with a Gold trophy ! Awesome & way to go Falcons! Congratulations! Now all play at the theme parks. Enjoy

Well, I'm calling this "Rich's" new project, but it was actually me who asked Rich to take this one on. He did such a great job on the TV/Entertainment Center/ Electric Fireplace that I thought I'd ask him to take on this new task. 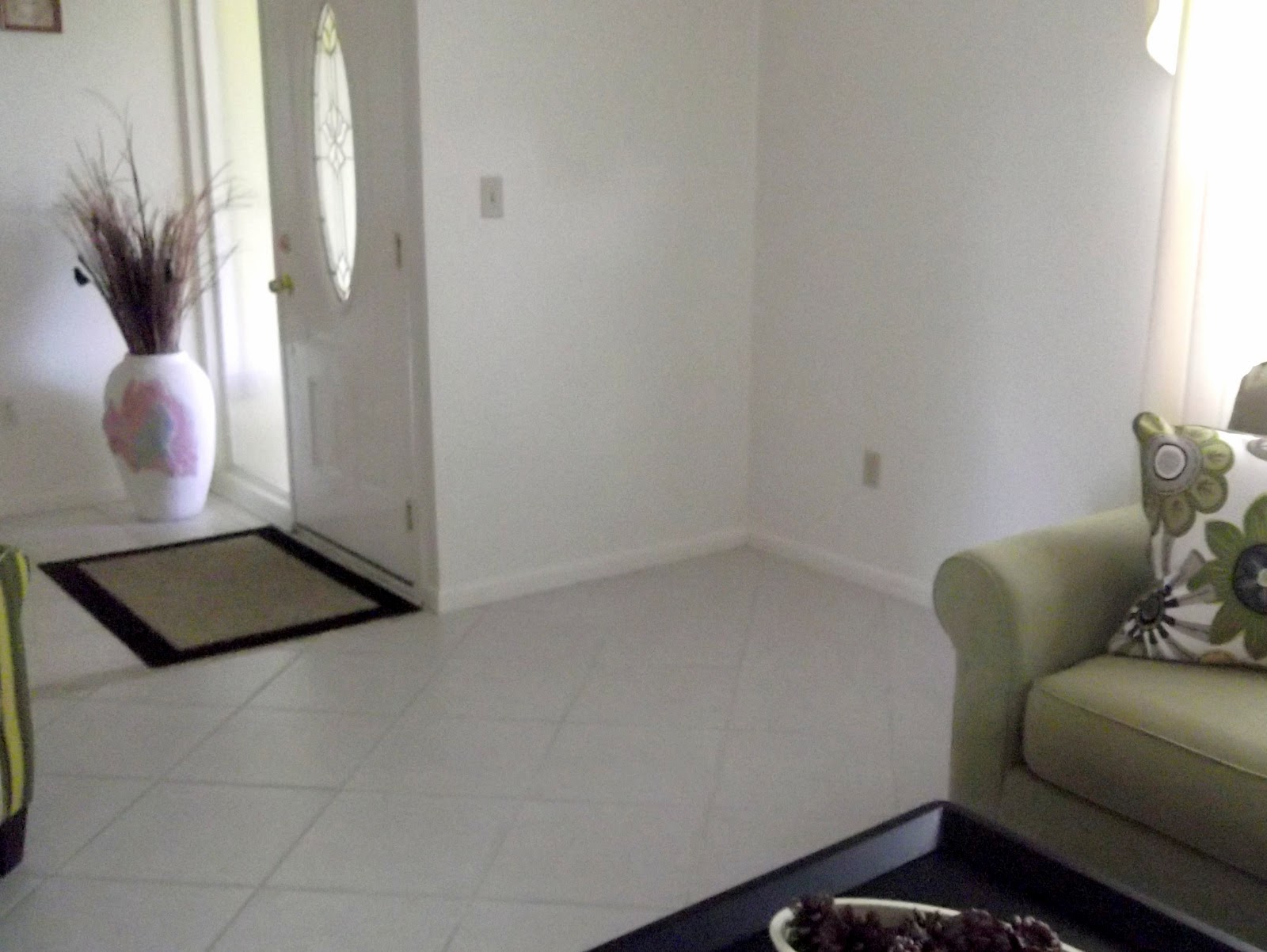 We discussed several options and decided that we would build a bi-functional piece of furniture for this corner.  Rich will be building a Secretary desk.

This will not only function as a decorative piece of furniture, but I will also use it as my computer "work area".  What's nice is that when I am not using it - the front portion of the desk will close and "hide" the computer. 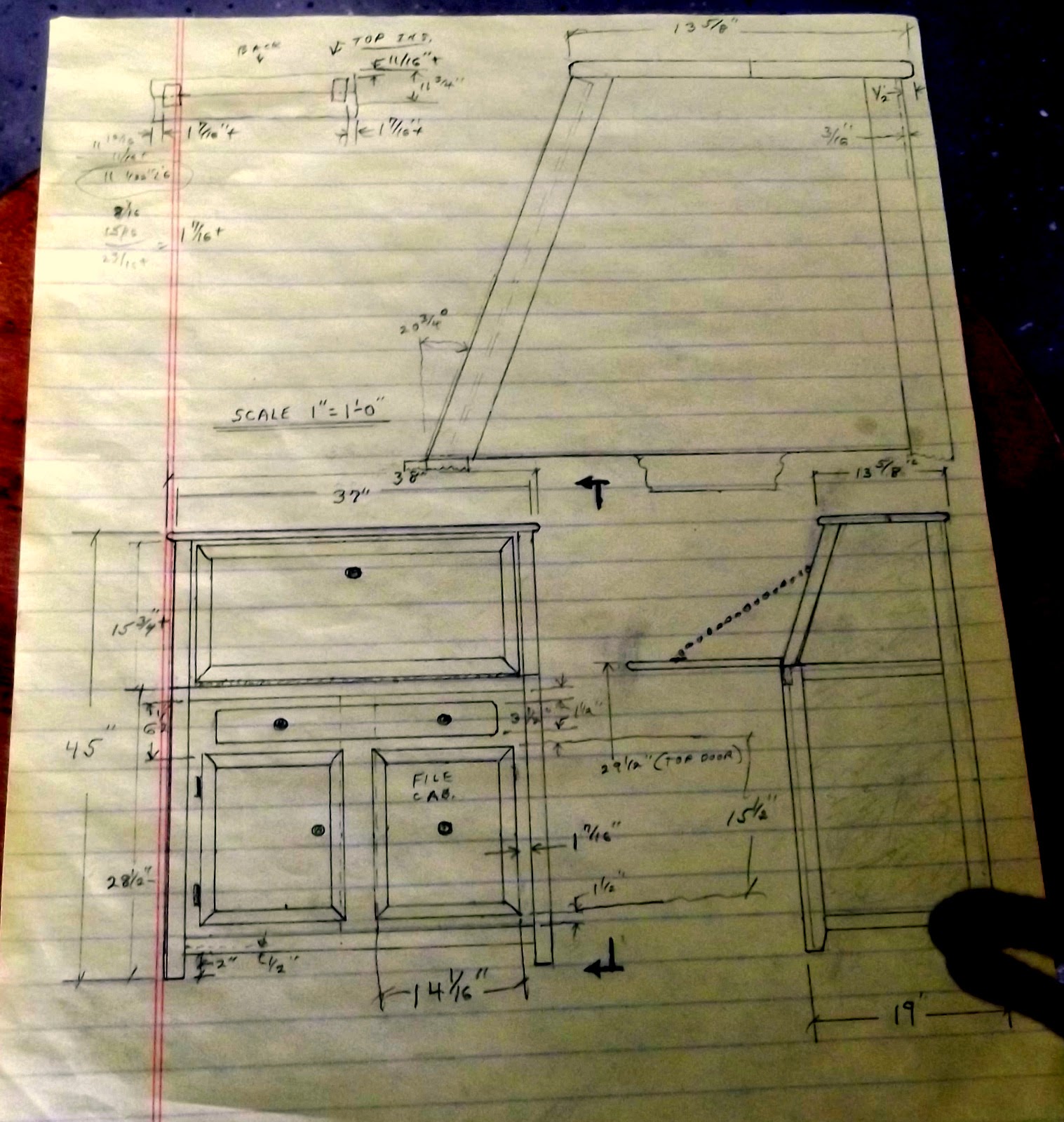 All of the furniture ( coffee table and end stands) are black in this room, so we will be making this the same color.  If I don't find a suitable chair that will serve as a "desk" chair as well as a functional piece of furniture in the room, then the chair will likely be the next project.


Rich and I talked about what I wanted the desk to look like and  he made up his drawing.

Then it was a trip to Lowe's to pick up the lumber, hardware and paint.

Now, it will be a while before it's finished, since the only time Rich works on the construction is a few minutes during the day if/when he can break away from the stock market, in the evening if we haven't made other plans or on the weekend.

I know - that doesn't leave much time for fishing!!

The construction is well under way.  But first we made ONE MORE trip to Lowe's.  This time to purchase a small table saw.  He has been using his circular saw, which required a lot of sanding.  He really enjoys working with wood, and I can always find something for him to "enjoy", so it made sense to get him a "new toy"! 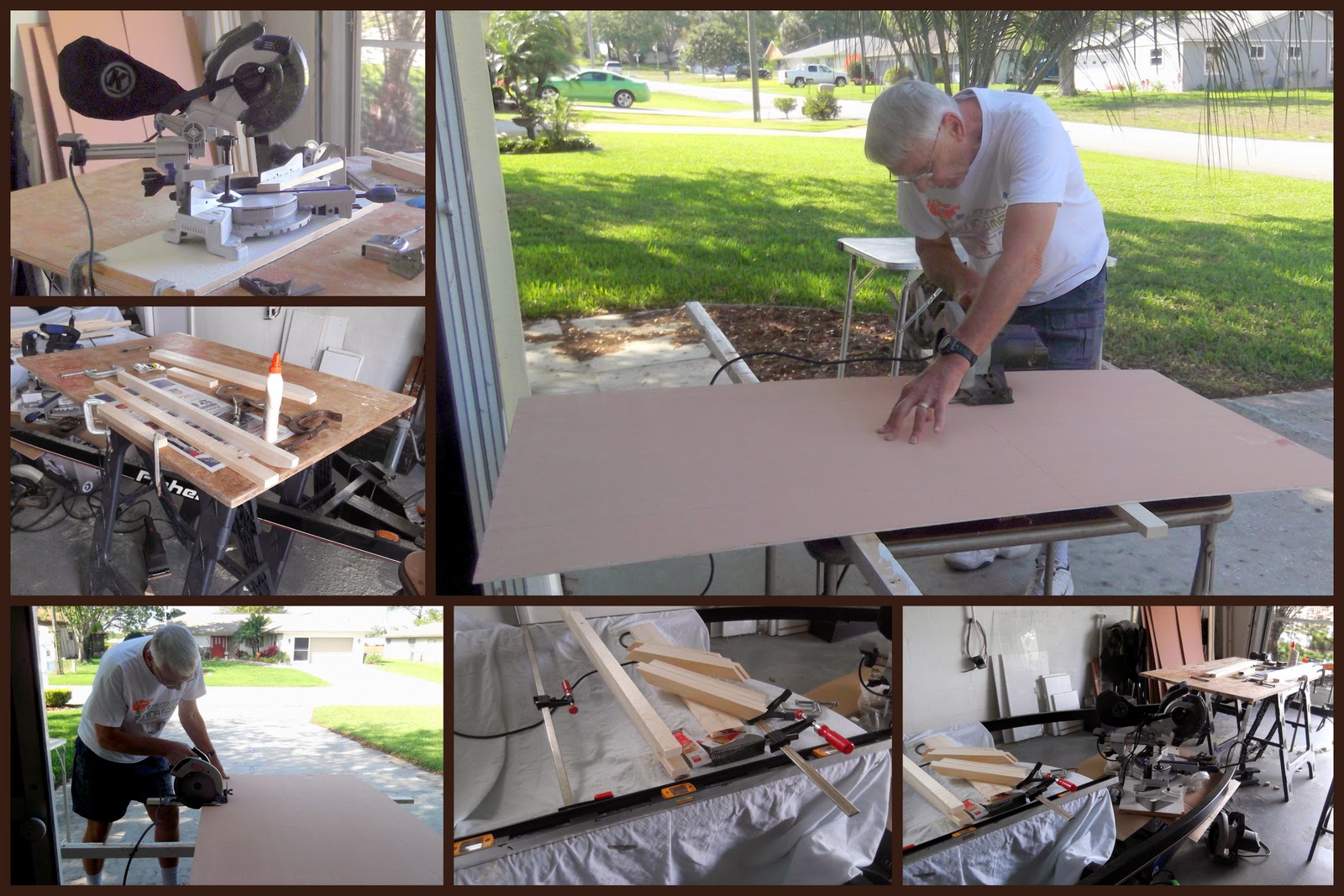 As you can see - the project area is the garage  and the driveway- so that means I'll always have something to do as well.  CLEAN!

Posted by DDonald at 9:53 AM No comments:

Not a lot going on this past week.  We are trying to get someone to come in and replace some of the vinyl weather stripping on our sliders.  Need to have that done before we have the tinting redone.  These are very old windows, so Lake Placid Glass and Mirror is having a difficult time fining the right vinyl.  We've already got Ryan Sellers, the owner.operator of Sun  Shield Tinting ready to begin - but we need to have the vinyl stripping replaced first!

In the meantime another Blue Heron has come to visit.  He is quite a bit smaller than our other visitor, but he does seem to enjoy our yard. 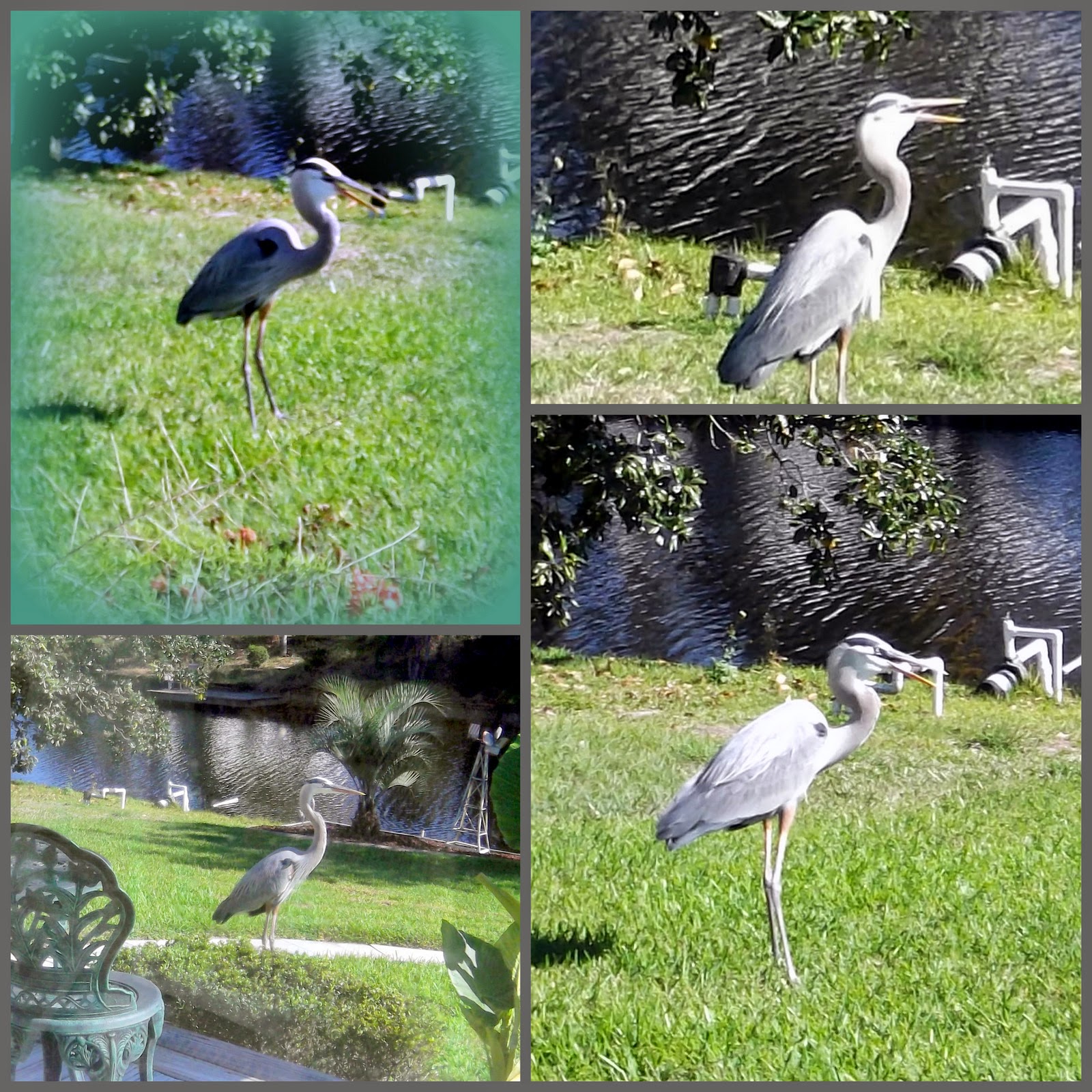 This week I also got to put my "gardening" skills to work.  I have never been one that could keep household plants alive and beautiful, but I love floral arrangements and real plants in the house.  I really don't know one plant from the other, but we had this very pretty green wispy plant in the sun room, that, this week literally outgrew it pot.  Rich and I were sitting on the lanai when we heard a strange noise from inside, and later found that the ceramic pot that this plant was in actually broke in four pieces.  It was off to Lowe's to get a new pot and potting mix and I re potted an indoor plant for the very first time!  It looks great - and it is getting soooooooooo big~ 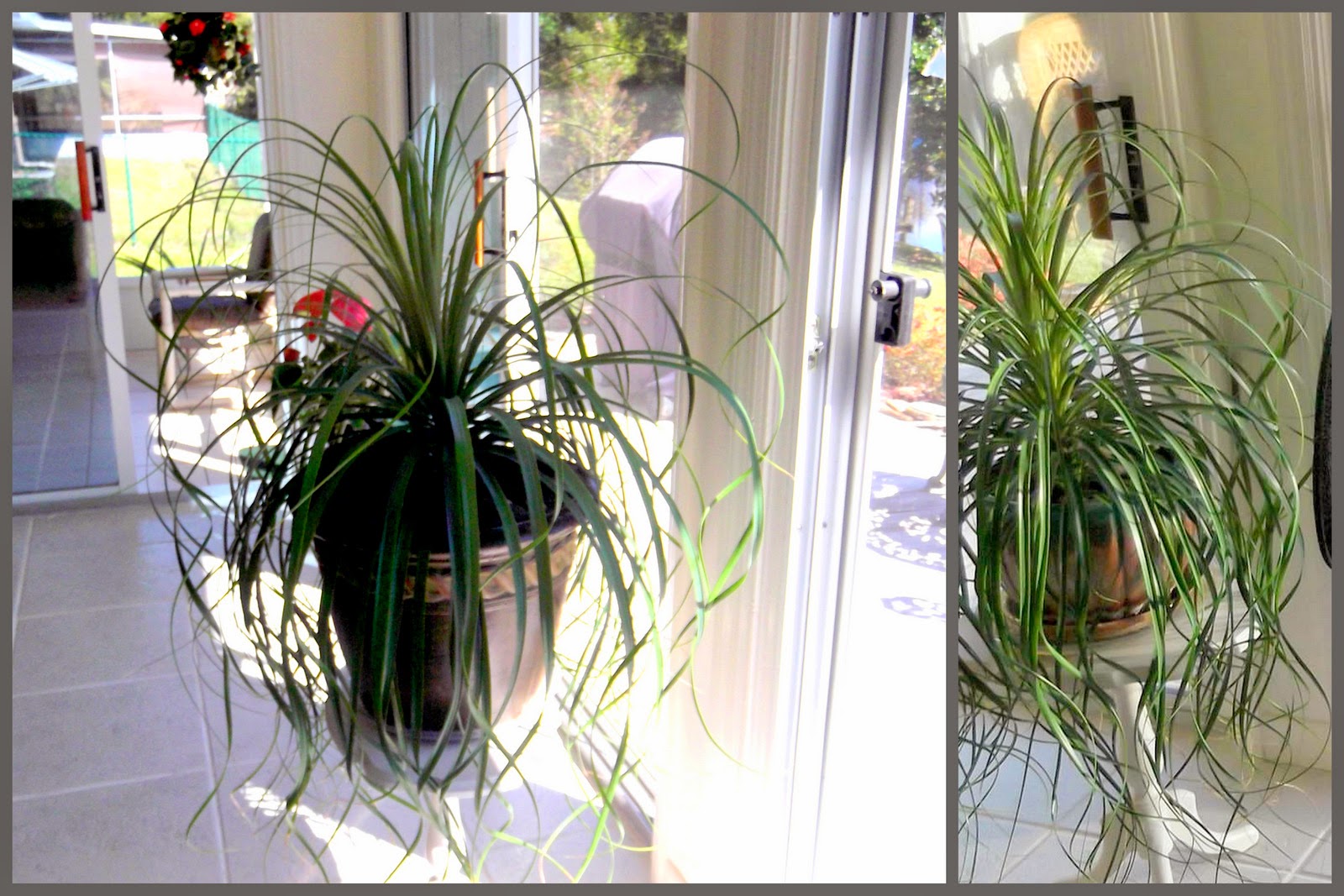 This week also brought us both good news and bad.

GOOD NEWS  - Our friends Nate and Krystal have given up their life as gypsies ( only temporary, I'm sure) and bought a home in Myaka City, FL along with enough land to bring in and care for horses.  Check out their new place at Gypsies Tails and Trails

The BAD NEWS:  We had a phone call from our good friend Linda Bass.  She and husband Don were our neighbors in Wesley Chapel for several years and they are such good friends, we just about consider them family.  Linda reported that Don is in intensive care after suffering an attack that required CPR......He now has a fribulator (?) in his chest and is recovering with several broken ribs.  Our prayers go out to both of them.  Get Well Quickly Don........

So we agreed to pick up some shiners and worms, if they stopped at McDonalds for breakfast on their way Saturday morning.  They arrived about 8:45 and by nine the guys had left in the boat, with drinks and lunch packed in the coolers and Rich with his thermos of COFFEE. 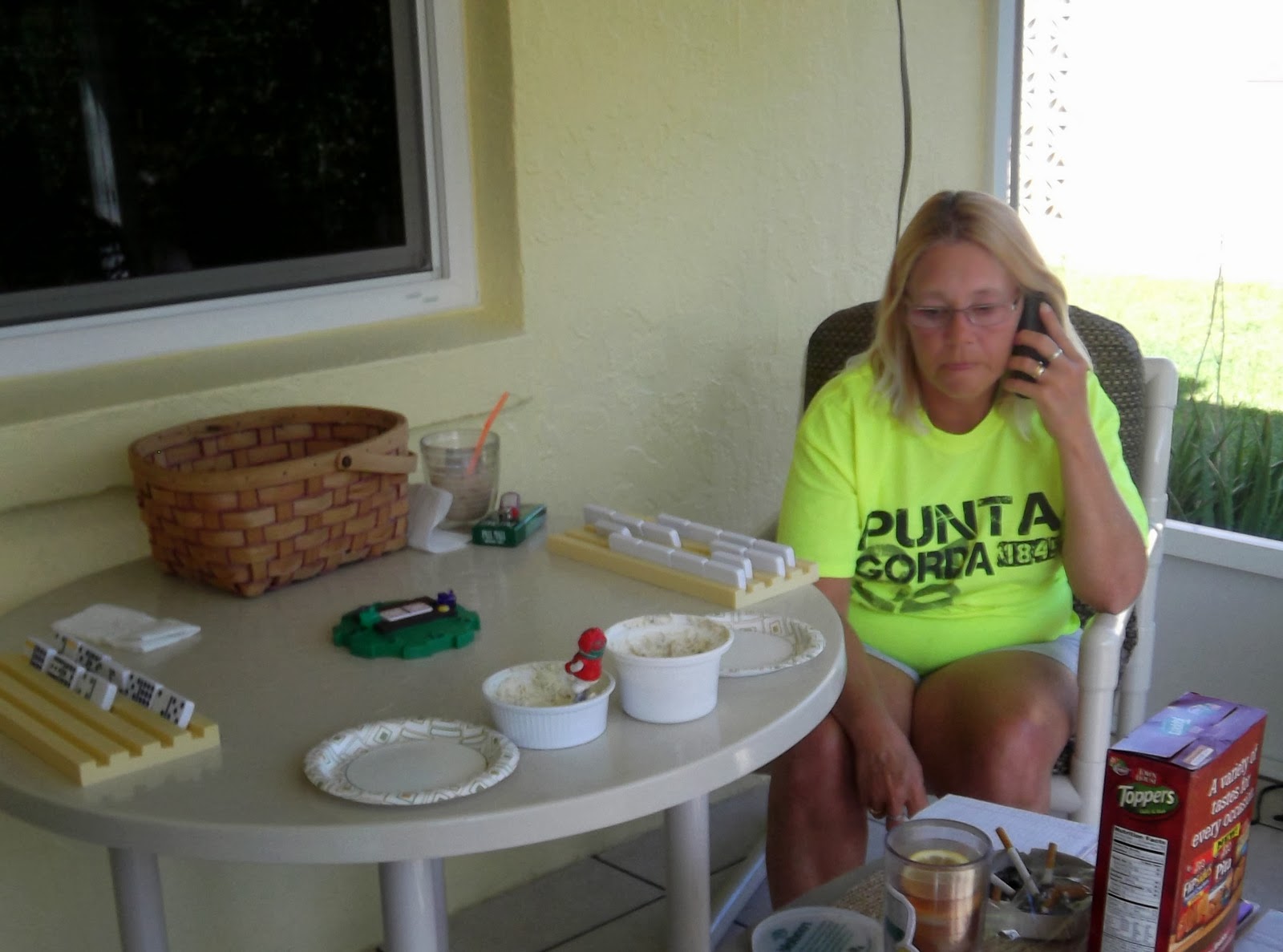 Tonyia and I took the radio to the back lanai and turned up the Country station.

By the time the guys finally made it back home we had finished the pot of coffee, had lunch/snacks, Tonyia finished her White Russian and we had played 3 games of Mexican Train and 3 or 4 games of SkipBo.

Nick kept us updated on how many fish they'd caught and sent pictures of the "big ones!"

It was after 3:00 when they returned.  The biggest catch of the day was the TURTLE that Rich managed to pull in, and a nice Bass( 16 1/2 inches long and just uder 2 lbs). 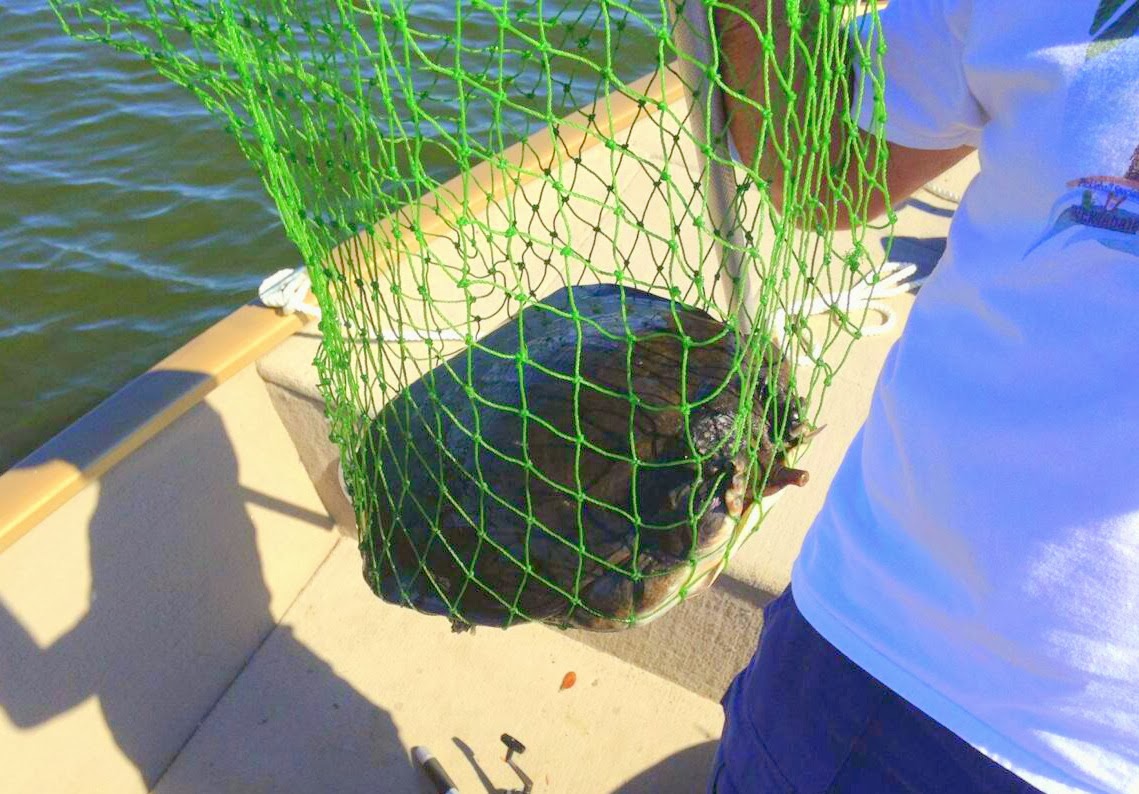 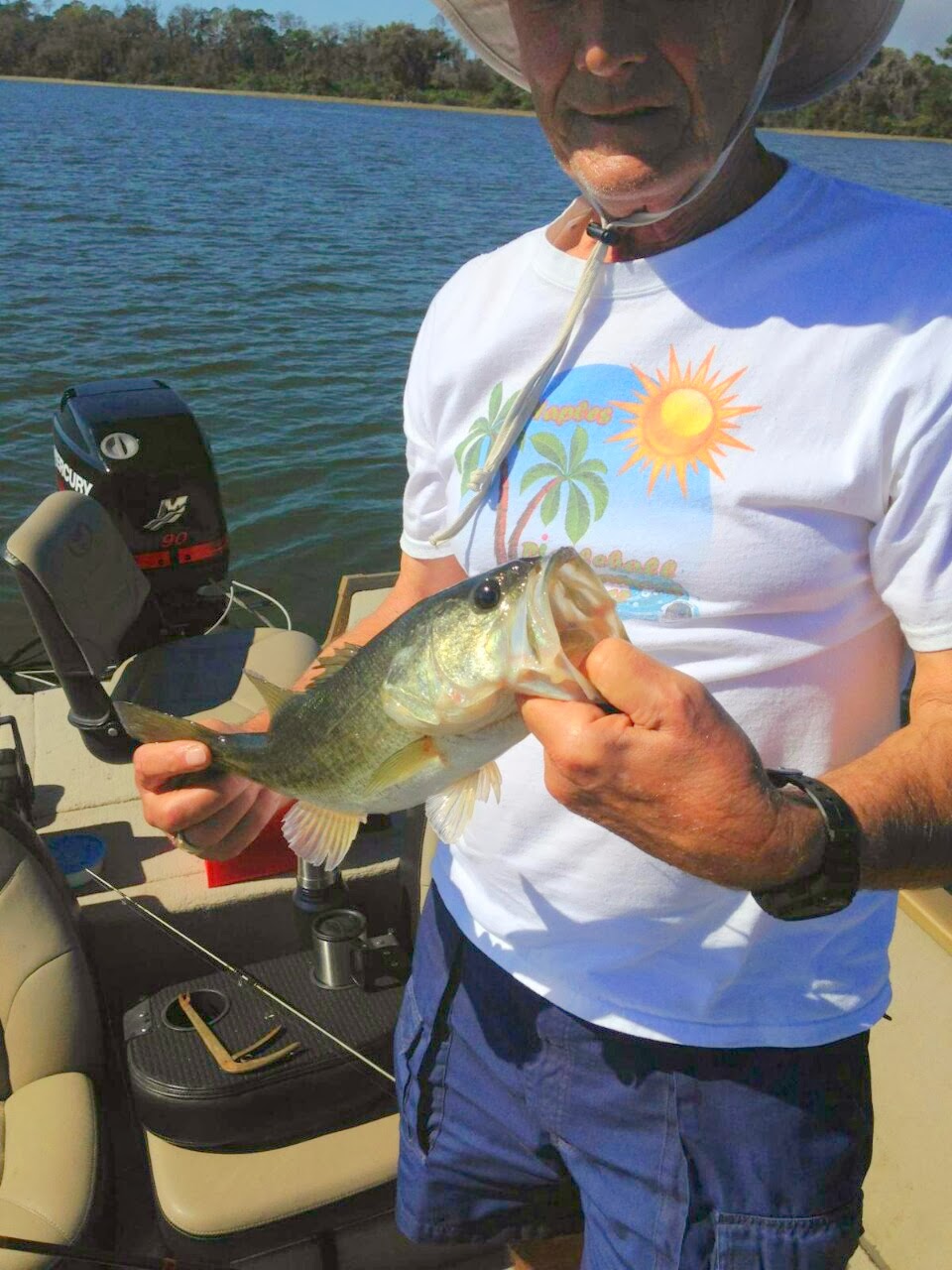 In all they caught 2 bass and 7 pan fish. (One real nice bluegill, and  the rest either crappie or shell cracker).  Nick put another shiner on the hook and fished off the dock while Rich was cleaning the catch of the day.  And Nick caught another bass, around 14 inches........but put it back to get bigger. 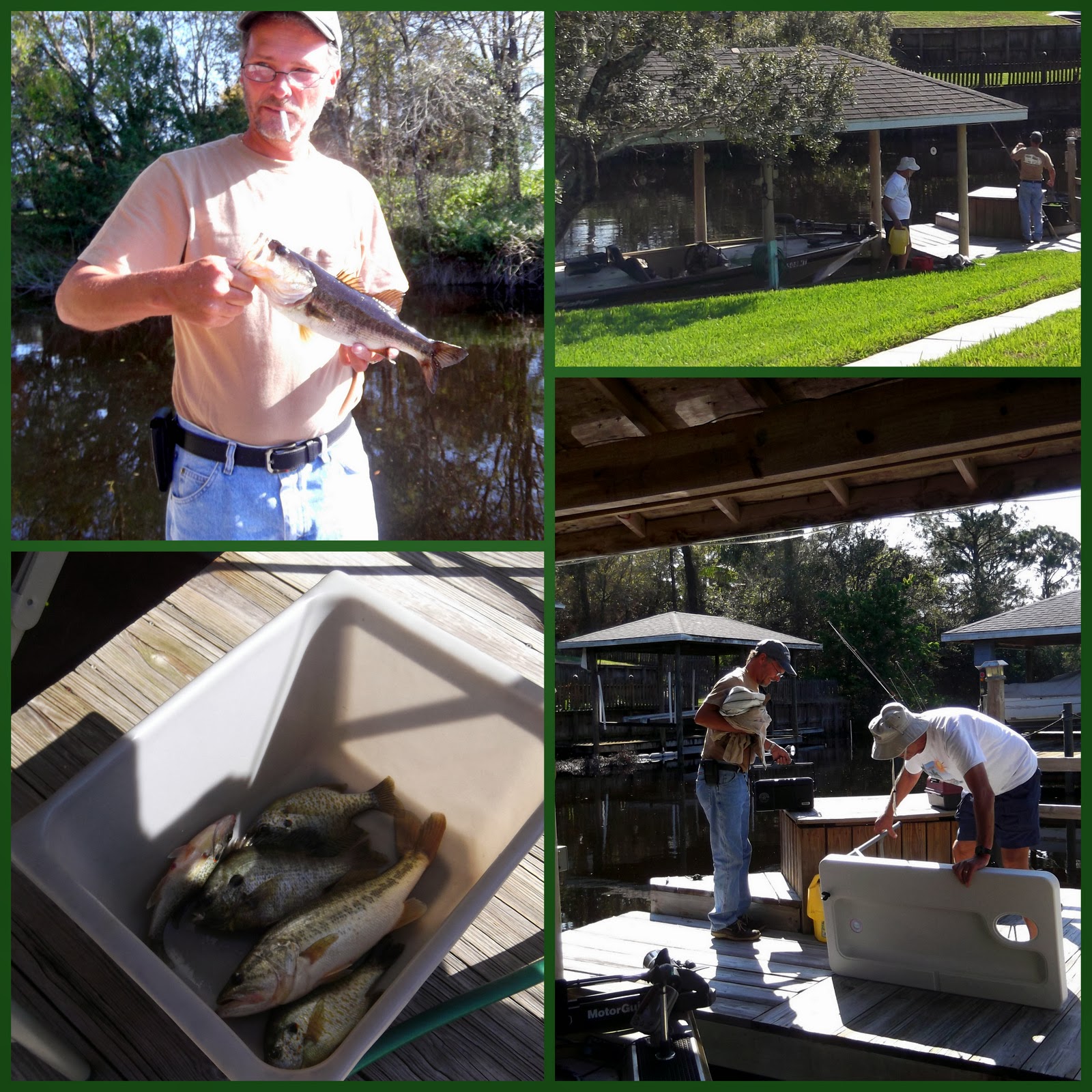 They guys were really tired.  Not surprising after sitting in the sun all day.  And they were hungry.  No place fancy tonight.  We just drove down to Coz's Sports Bar at th Bowlong Alley, here in Lake Placid for a quick bite.  Rich ate a WHOLE medium pizza by himself, and Nick a huge burger and fries.  Tonyia opted for the grilled cheese and bacon and a huge dish of chile, and I had the philly steak sandwich.  Very very good~
Nick and Tonyia headed home after dinner.  Rich managed to watch TV for a little while - but the lights were out early! 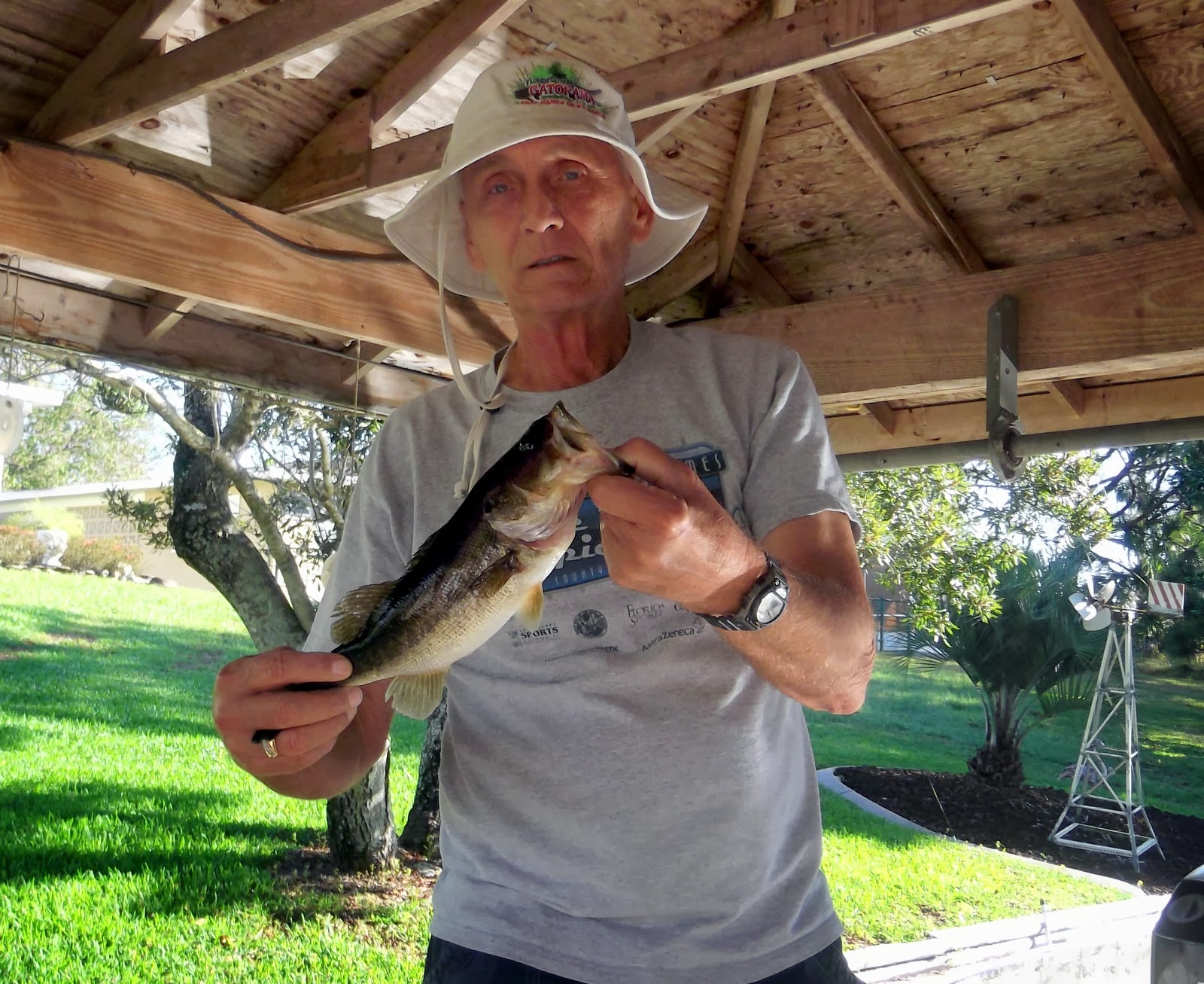 Sunday morning there were 4 shiners left in the minnow bucket.

So Rich and I just went out on the dock and fished for about an hour an a half.

The bait was soon gone - but not before Rich pulled in a bass.  It was about the same size as the one Nick had caught the day before.   And he threw this one back to grow a bit bigger too!

Then it was time for breakfast!  Rich did the oatmeal. I did the toast. 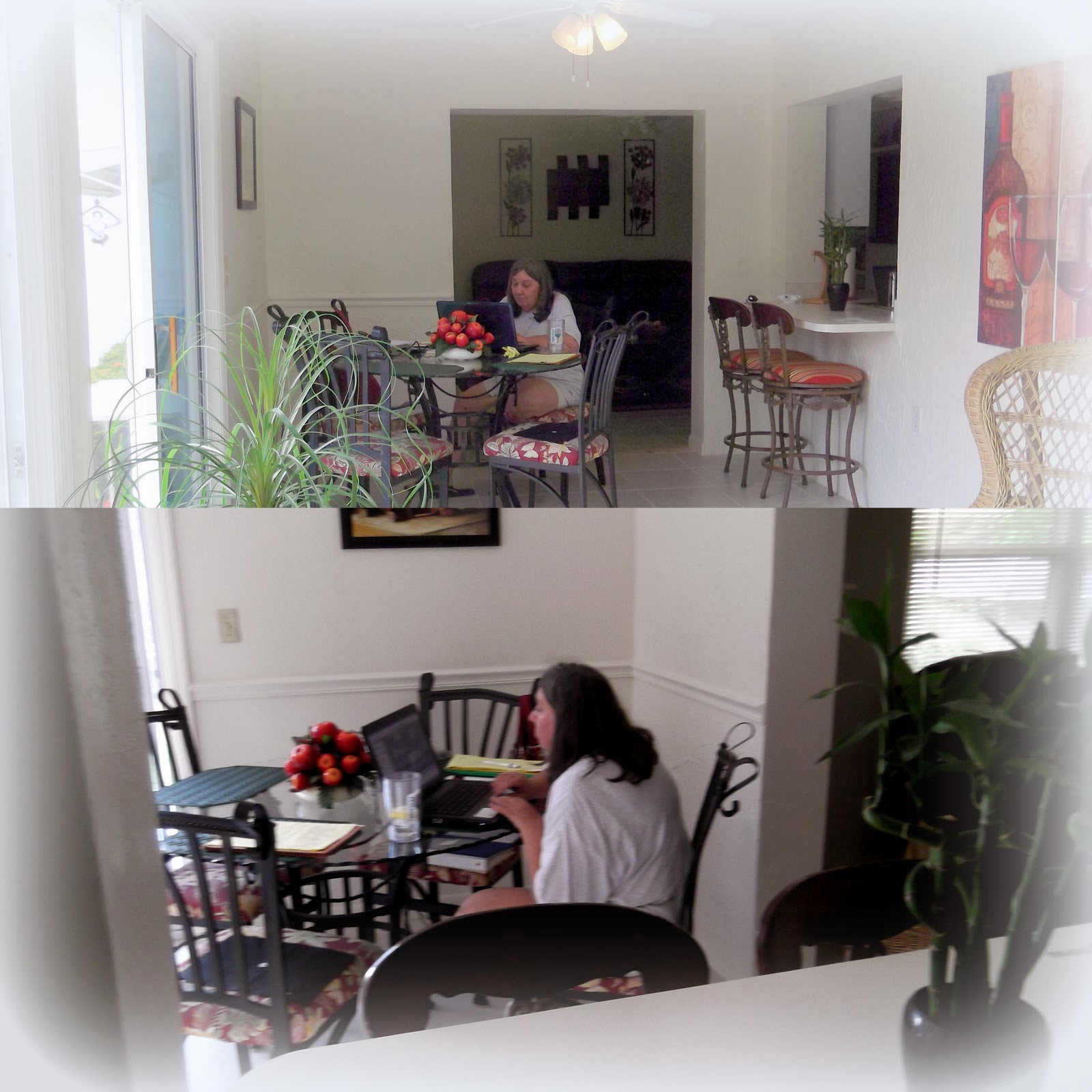 Not often that Rich can get me in front of the camera.


He'd been kidding with me the past couple of days, pretending to get a picture of me saying  "Here's Donna - organizing"   I'd been telling him that I'd been organizing my pictures and making up lists for our summer trips to Cocoa Beach and New York State..  Anyway, when I downloaded the camera I was surprised to see these two pictures.

Until he gets my new desk made - this is where I park my computer......