On Friday morning we arrived at the White Pelican Gym in Pelican Park, Mandeville, LA for the start of the Mid Atlantic Regional Pickleball Tournament. Nearly 200 players from across the country registered to play. Men's and womans doubles were played on Friday followed by Mixed Doubles on Saturday. The tournament was set up in age brackets, and each age bracket had two or more splits. Each split, depending on the number of teams in the split played a round robin, each match consisting of two games either to 11 or to 15. The top two teams in each bracket played off in the medal rounds which was one game to 21 points in each medal match. 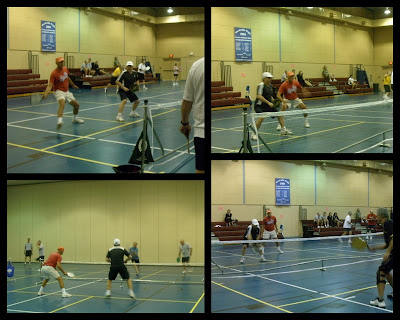 Above Rich and his partner Paul Coletta from, Flat Rock, NC play. In their split there were four teams so they played three matches consisting of two games to 15 points. They won all six of their games and moved on the the medal rounds where they played two games to 21 points.

In my split there were five teams, so we played four matches, consisting of two games to 11 points. Diane Ramsdell, from Hot Springs Village, AK, was my partner. We lost our very first game but we won all of the next seven games and moved on to the medal matches, which was two games to 21 points. We lost our first game to 21 and then played off for the bronze medal. In our final match for the Bronze we had to beat the only team that we had already lost to, Linda Neill (Lacomb, LA) and Joyce Pyall(Slidel, LA) We won 21-18! We really should have had the Silver!!!!! I had so much fun partnering with her. More than just playing well together, we just had a great time on the court - regardless of the score. 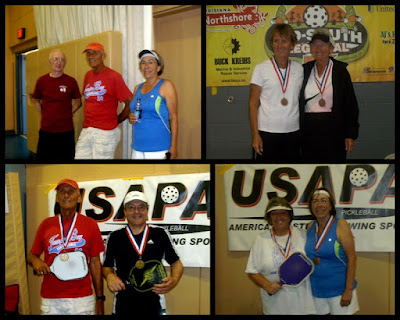 Pictured above (top left) is Dennis and Diane Ramsdell with Rich, Pat Lively and her partner with their Silver Medal, Rich and Paul with their Gold Medal, and Diane and I with our Bronze Medal!!! Our friend Nancy Myer from Ft. Myers took the Silver Medal in the 50-55 ladies doubles with here partner Jan Konn (Chicago/Ft. Myers) but they were playing in the building next door and when I got there Jan had already left. 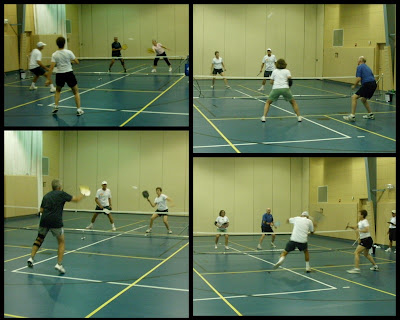 In the picture above, Rich and his partner Cynthia Boudreaux from LaFayette, LA. On the left they play against Roxanne Ware and Greg Hansen from Texas in the first of the three medal matches. Rich had played with Roxanne in the National Senior Games in Ft. Lauderdale two years ago......and had called to ask if she needed a partner for this tournament. Roxy was already playing with Greg.....so Rich was partnered with Cynthia. Rich and Cynthia took this game 21-5. On the right was probably the best match of the tournament!!!! Rich and Cynthia play the second 21 point match to see who moves on to the Gold/Silver Final. The opponants are Tom Burkhart, from Baton Rouge, LA and Mary Ozarowski from Schenedtady, NY. It was down to the final matches of the day.......so a lot of people were in the bleachers cheering on the players. Rich and Cynthia were DOWN 0-10........ , then 1-11, then 2-11 - then 15-15..................and then they took it home, winning 21-15. There was some terrific playing on both sides of the net in this game but Rich and Cynthia were awesome! 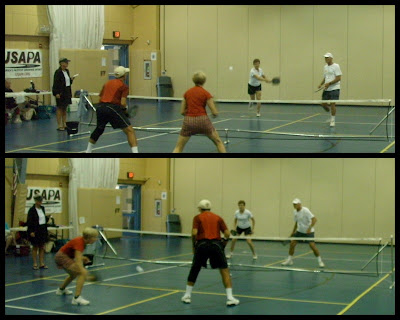 They moved on to the Gold Medal Match, playing against, Christie Borne (Trombell, TX) and Roger Workman (Houston, TX). Another very good, competitive game......but Rich and Cynthia finished on top. 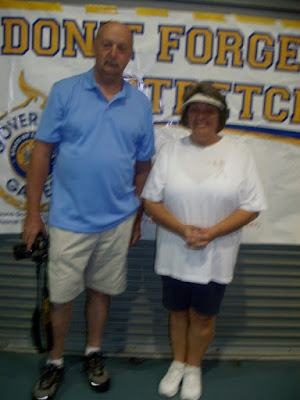 I played in the mixed doubles as well and was partnered up with Joe Smith, from Mississippi. Joe was there with a three or four other guys from Mississippi. All of them had to find partners for the mixed doubles. Joe says that there is a group of about 8 people who play in Mississippi, and all of them are men. Don't think that Joe has been playing the game for very long.........we didn't do very well.........but we had a good time trying. 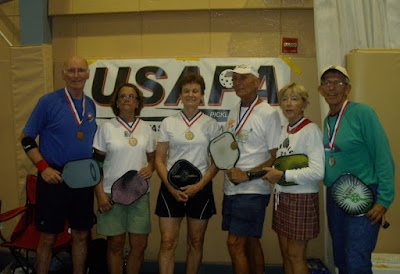 Congratulations to Rich and Cynthia on their gold medal win. It was a tough battle and the rest of the players, Tom Burkart and Mary Ozarowski (left) and Christie Borne and Roger Workman (right) all played like the champions they are!

Bruce and Gena were back in the park after Bruce's surgery this past week so we met up with them for dinner at Pauls Restaurant.

Rich and I go to a lot of the Senior Game competitions here in Florida, but this was the first big tournament we have been to outside of the State. To all our pickleball friends.............if you get the opportunity to play in a USAPA Sanctioned Tournament - don't miss the opportunity. We met so many nice people and even one couple, Marty and Prissy Martin from Morgan City, LA, that we hope to hook up with this summer at The Villages. It was a trip we would definately make again.