A visit from some Tanglewood Picklers

Rich had received a few e-mails from Charles Kuehn over in Tanglewood in the past week. If  you've been to Tanglewood then you know about the concrete area located between the pickleball courts and the tennis courts.  This is the area where four or five times a year they have their monthly "bash" parties and everyone comes out to dance to the music.   They already have some pickleball lines painted there  and they sometimes set up the temporary net for a practice court.

They are looking to paint the court and re-paint the lines and they were looking for the best way to make the surface non-glare and non-slippery for the pickleball players, but not too tacky for the line dancers. 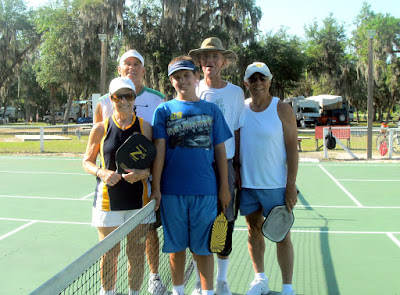 So Charles brought a few other of the pickelball players from there and came over to Peace River to check out our courts.  It was a pleasant surprise, since we don't have any players left in the park.  Pictured above (back row, left to right) Doug, Charles and Bob from Tanglewood.  In the front row is Gloria, also from Tanglewood and Chris.  Chris is 16 years old, and in the park for a few days with his grand-parents, who came along this morning to watch him play.  He's a very good player.  So, since Rich's knee is bothering him, it was Chris and who took turns playing with the visitors.