Even The Rain doesn't Stop Pickleball!!

There has not been a whole lot of pickleball players here over the last two weeks - especially at the same time. By Wednesday this week we were close to having enough for two courts. So we were finally back on schedule for 9:00 on Thursday morning. Now, since the 1st of October we have had only ONE day of rain. The second came Wednesday night and early Thursday morning. But about 8:00 Rich headed down to the courts and swept off the worst of the puddles so the court would dry faster.

When we back down just before 9:00 Cal and Buddy were doing more of the same. After about 15-20 minutes of just volleying the ball back and forth, one of the courts was dry enough to play on and more players began to arrive. 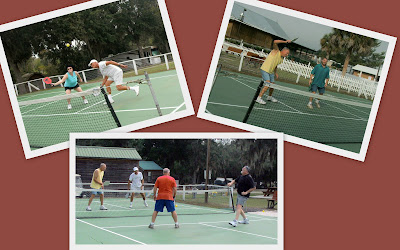 And we played until almost noon! Above is Gena and Rich, Bruce and Art, and then Bruce and Rich playing against Buddy and Bruce. 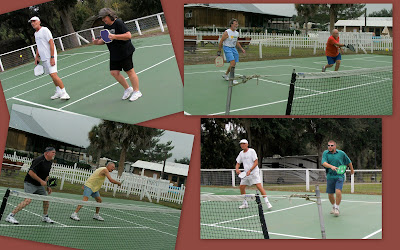 From the top left: Rich and I, Cal and Buddy, Bruce and Bruce and Rich and Art. Most of us came back out to play at 6:00 that night. On Friday morning Bruce and Gena left for Venice/Englewood to spend the holiday - and they'll be gone until probably next Saturday. Late Thursday afternoon Mitch and Barb came in, and on Friday Tom and Margie. About time for another "happy hour" I think!