Pretty much the same as usual the past couple of days. Pickleball (or laundry) in the morning, Pokeno or Bowling in the afternoon and Pickleball at night. Rich and Dee are back in the park, Mitch and Barb have pulled in. Janet's been down playing - but Bob, after one trip to the courts realized he needed all his energy for some needed work at the righ.

Today - I headed back up to the courts in the morning, as usual, but Rich took off for Sebring. He picked up Linda (his mixed doubles parter) at Tanglewood and the two headed over to Highlands Ridge to play. One of the guys there (Gary) may be partnering up with Rich at some of the upcoming Florida Senior Games.

We've been working on setting up a regular play schedule for the courts here in Peace River, so I spent a little time with the rec person today. Art, one of the young guys who plays with us, had a large piece of wood that will work great for a bulletin type board at the courts. Got all the corners rounded nicely, so I found one of the workers here to paint it for us. We've scheduled regular "beginner training" twice/week, and Rich is now scheduling his skills clinics. 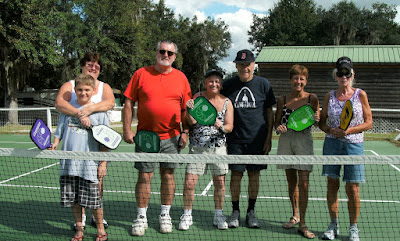 Tuesday and Thursday is beginner training for our newbies. This was the group from today - Vickie (and grandson Cameron), and Terry, Heddy and Art, Janet and Kitsey. This was actually Janet's second time attending. Unfortunately she and Cameron didn't come with proper court shoes today - so we had to ask them to leave the courts once we started hitting some balls. We had a great session, got through a couple of games, and lauged a whole lot!!!! 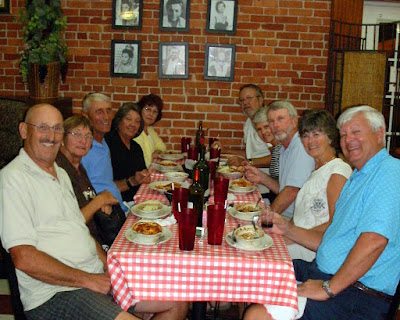 Tonight we met a group of our pickleball friends at Giovianni's Italian Restaurant in downtown Wauchula. Pictured above (left) is Stan, Sally, Rich, me and Margie. On the right is Mitch, Barb, Bob ( yes we got him to stop working!!), Janet and Tom. No alcoholic beverages are sold here, but you're allowed to bring your own bottle of wine. Mitch and Tom each brought their bottles - that we learned were purchased from two different nursery's, closely located in the same city. And Sally brought along a bottle of her Sally Pearl wine . The food was excellent. Portabello Ravioli was the most popular tonight and got rave revues! The waitress was a real sweetheart - and was glad to accomodate mine and Barb's need for the group picture. The company and conversation was great - bringing a smile or laugh to all before the evening was over.
Posted by DDonald at 9:26 PM