We've been getting some pretty cold weather for this time of year, waking up to the high 40's a couple of mornings. Don't usually have the heat on this early in the season - but it's been kicking on almost every night. Until today even the days have been pretty darn nippy, with winds from the north anywhere from 10 to 15 mph!! Talk about Bad Hair Days!!

I'm still nursing this sore neck, wanting to make sure I can play this Saturday at the Rally Tally Tournament over at Kings Point, in Sun City Center. Rich has been out most evenings playing. On Sunday we said goodbye to the Showalters!! We had hoped they'd be staying here in Peace River, but Arik got a job at TT Orlando, so that will be there home for a while. We are really going to miss them - but we hope to see them Saturday at the tournament. 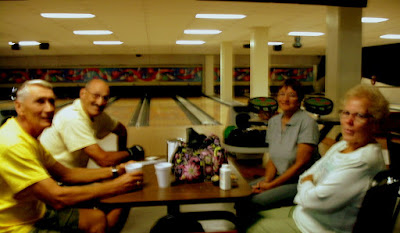 Bowling is officially under way. The group was small - but Rich, Stan, Sally and Eleanor kicked off the Monday afternoon season at the Bowl Of Fun in downtown Wauchula. Everyone bowled some decent games and Rich even had a TURKEY!!! 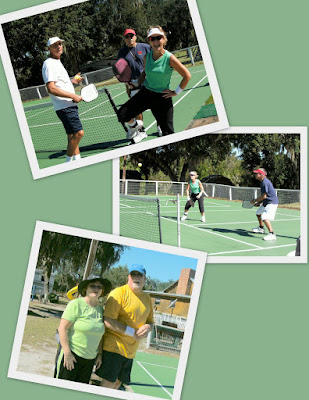 On Tuesday we had visitors from Kings Point. Louann and JD called and asked Rich to work with them on their pickleball game. Buddy, Bruce and Gena came down to help. Rich would watch and critique their play during a game, and then work one on one with them. They are partnering for most of the tournaments this winter, and wanted Rich to give them some pointers/drills to help improve their game. Louann promised that she, Tony and "the girls" would be over in December with the buggy and stay for a few days. We gave them a quick tour of the park and the river before they left. And then we spent much of the afternoon getting the "blown tire" on the car fixed. I'll let Rich tell you about that! 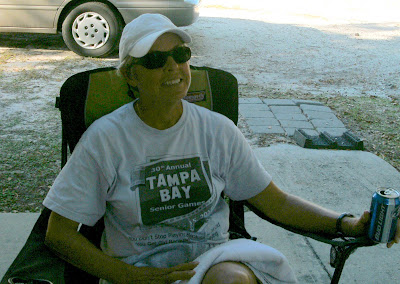 On Wednesday it was more pickleball practice for Rich. His mixed doubles partner, Linda Kramer came over from Sebring so that the two of them could do some practice drills. While the two of them worked out at the courts for about two hours - I met the group at the adult lounge for some afternoon Pokeno. Made it back to the RV in time to enjoy a little conversation and an afternoon beverage before Linda left for home. 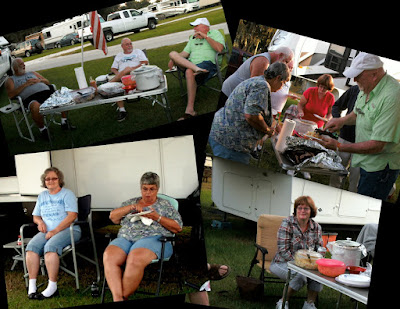 At 5:00 - we were meeting some friends for happy hour at Bill and Brenda's. Bill prepared the most delicious Ribs! I could smell them cooking when I came back from Pokeno about 2 hours earlier! Without a doubt, some of the best ribs we've ever had. There is a little contest going on here between Stan and Bill as to who makes the best ribs. Stan I guess we'll have to try yours' next! To accompany the ribs we had Buddy's potato salad, Gena's macarone salad, my green bean salad, and Shirley's Baked Beans. Brenda topped off the pot luck with some home made brownies.
See you on the courts at 9:00 am tomorrow!