On Saturday, we headed to one of our very favorite places to play - Kings Point in Sun City Center. Most all of the RV'ers in the area know of Louann Dubendorf and her pickleball crew at Kings Point. Every year they look forward to her two events, generally in the Fall and another "Winter in Paradise" after the first of the year. This year some of our friends from the Meadow Pointe community in Wesley Chapel where we live - came to the tournament as well. 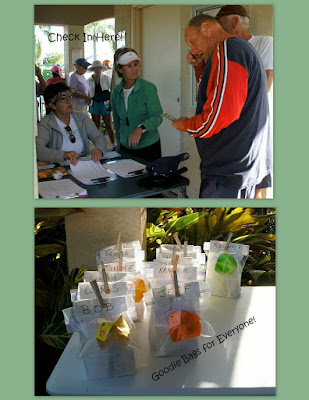 That's Louann, in the green sweatshit - welcoming the players at the registration table. And as usual, she made up some of her great goodie bags for all the participants. The event seems to grow larger and larger each time.....There were 65 players registered to play today!! 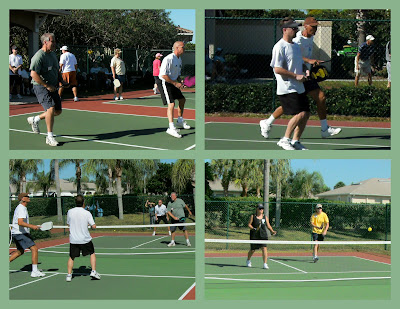 Above are our friends from Meadow Point, John, who was supposed to play with Don , but because of medical issues he was unable to play. So Louann partnered him up with one of the Kings Point players. Rich teamed up with Chris, and in the bottom left they play against John and Mike. The two ladies are Karen and Cindy. Karen lives in Meadow Point, and Cindy is visiting from California. 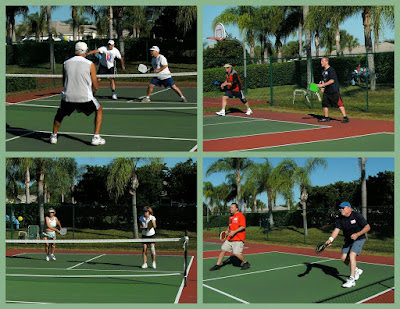 And we had a great turnout from our RV crew...... Stan and Buddy playing against the guys from Solivata (up near Orlando) Dennis and Austin, Kathy and Fran, and bottom right - Nate and Bruce. 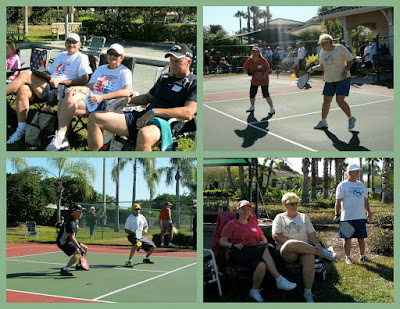 Stan, Sally and Doug from Torrey Oaks - relax between games. Krystal and Tracy in a hot match! Doug and Richard - knees bent and getting down for the ball!!Krystal and Tracy relax after a tough match as Buddy waits his turn. 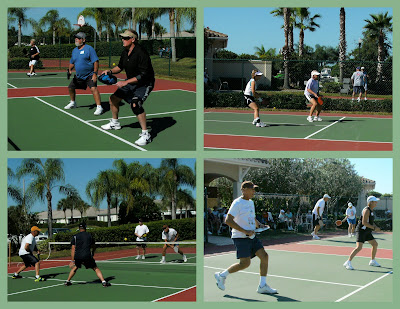 That Bob Hughes and Dennis from Tanglewood, Louann and her partner Nadine from Kings Point, Rich and Chris playing against Doug and Rich, and Rich with his mixed doubles partner, Nancy Meyer - from down in Ft. Myers. 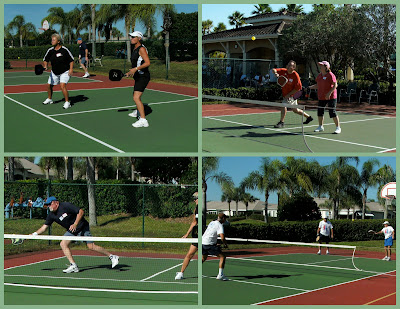 Nancy again with partner Cindy - Sally and I played against them - but alas........we lost. Great Return from Nate and Krystal. That's Bruce on the left and Rich playing against Stan and Sally. 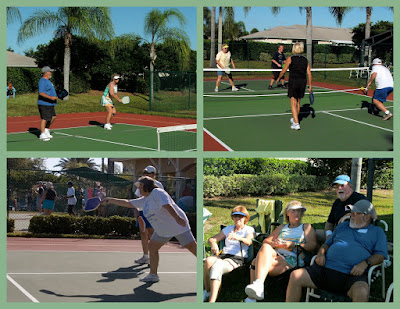 Bob and Kathy Hughes, Buddy and his partner , Shirley, from Kings Point in a good match against Austin and Tracy. That' me hiding Sally behind me......and Fran, Kathy and Bob Hughes and Bruce chillin...between matches.
And we brought home a few ribbons this time. Rich and Chris took Gold in the Men's Doubles - competitive division. Karen and Cindy took Gold in the Ladies Doubles, Recreational division. Stan and Buddy took Bronze in the Men's Doubles- Competitive Division, and in the Mixed doubles: Chris and Louann -1st place, Bruce and Jane (his partner from Kings Point- 2nd place, and Rich and Nancy-3rd place in the competitive division. I was supposed to play with Don from MeadowPoint, but since he was not able to play I partnered with John from Kings Point and we took gold in the mixed doubles - recreational division.
The weather was perfect. We had a gret day and look forward to the next one!