Not sure if the kids wore us out or if it was just the letdown of not having them here any longer.   And it was only 10:00 a. m. on Wednesday and they had only been gone a few hours.   I don't even remember what we did on Wednesday, except that I made a trip to the local store for water  and that we had Ickeypoo ( our name for ground beef and mashed potatoes) and corn on the cob for dinner.  Oh - and we made a trip to Walmart to get a small charcoal grill and a few groceries.

Thursday was very very hot so we didn't go out fishing until about 4:30.  And I had ANOTHER ONE GET AWAY.  Denny and Dalton  - I want you to know that IF I had got him in the boat I would have been able to claim the biggest fish.  I was using a yellow and red jig and hooked on to a nice small mouth bass.  It surfaced and jumped three times and when I had him about 3-4 foot from the boat, my line snapped.  We had a good look and it had to be 16-18 inches.  I think Rich felt worse than me..... because this line had snapped once before and we thought it was the drag not set properly.  That line is now in the garbage.    I made a small salad and we cooked Polish Sausage on the Grill. 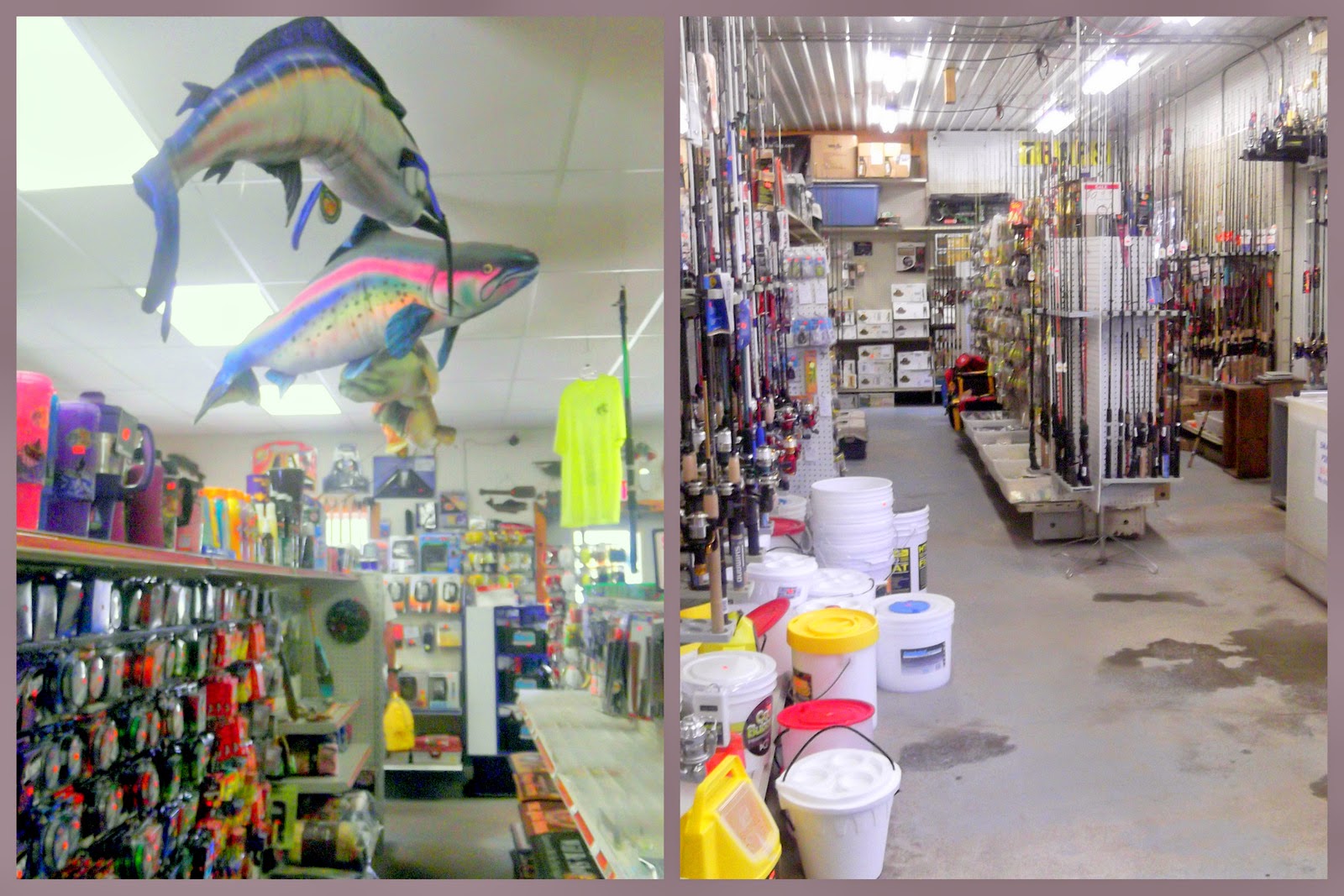 Friday we made a trip to the local bait shop.  This place is huge.  We picked up some minnows and considered getting some crabs.  Picked up a map of the lake to see if we could locate some new fishing hot spots.

This shop sells everything from bait to tackle and hunting supplies and  t-shirts  and batteries and water toys and you license for fishing and hunting.

We ate early and headed out to fish around 6:00.  When we got out there it looked a bit like rain.......  In the picture below you can see the dark clouds and then it clears up nicely and after using more than half of our minnows and Rich catching only one small bass we had a great view of sunset from the lake as we headed for shore. 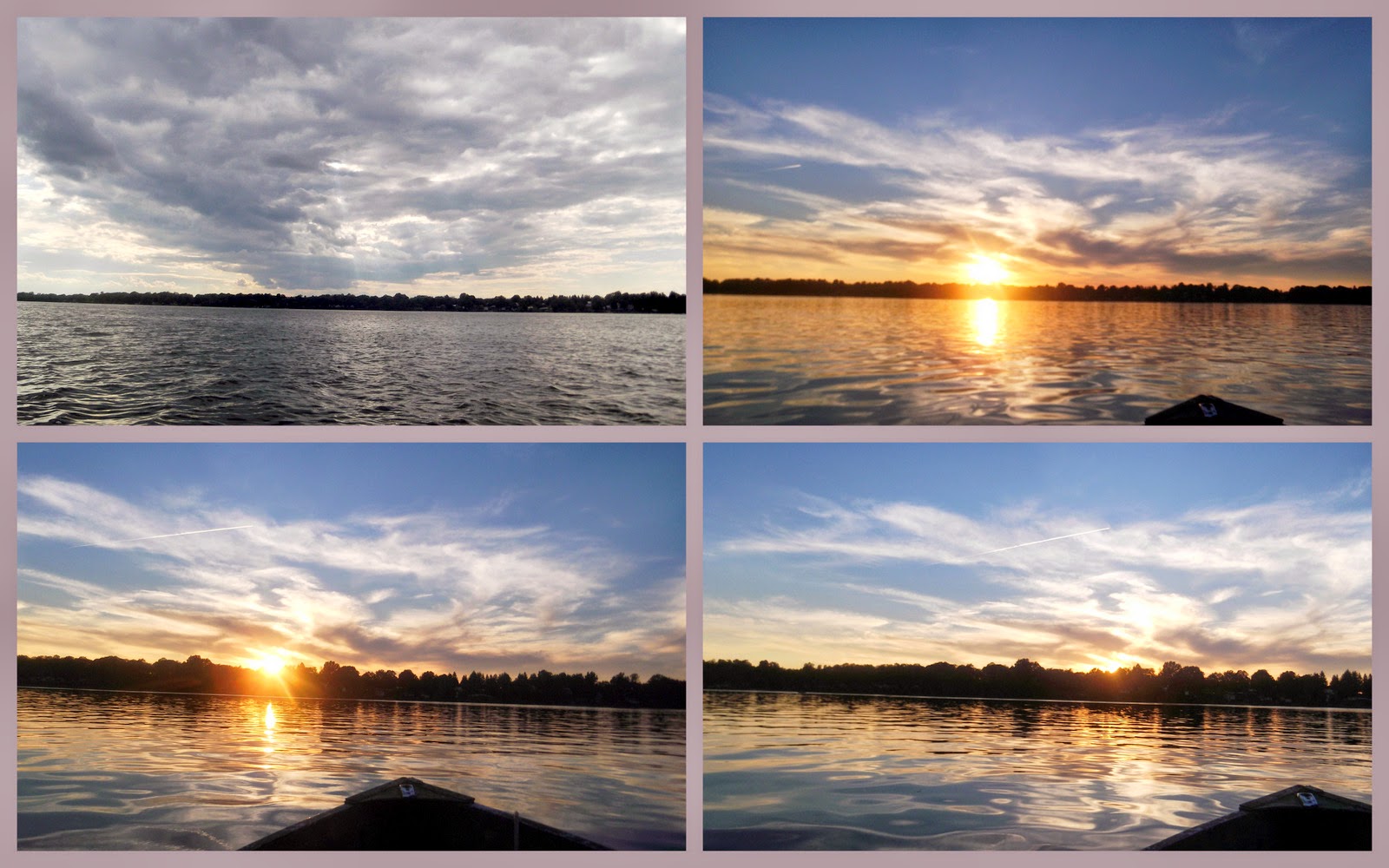 It was going for 9:00 when we got in, and the neighbors were sitting out and had just got the camp fire started.  We'd met most of them briefly so we grabbed a drink and decided to join them.  There was about 12 of us out there, and around 10:00 three more guys from cabin 11 joined us.   Dean ( owner) and his wife Sherry were out, Bill and Lynn (from Rochester), Paul ( in the wheel chair) and Monica who have been coming here for about 20+ years, and the guy in the green shirt (can't remember his name) and his wife Karen.......who I met several days before at the Laundromat!  It was after 11:00 when we called it a night. 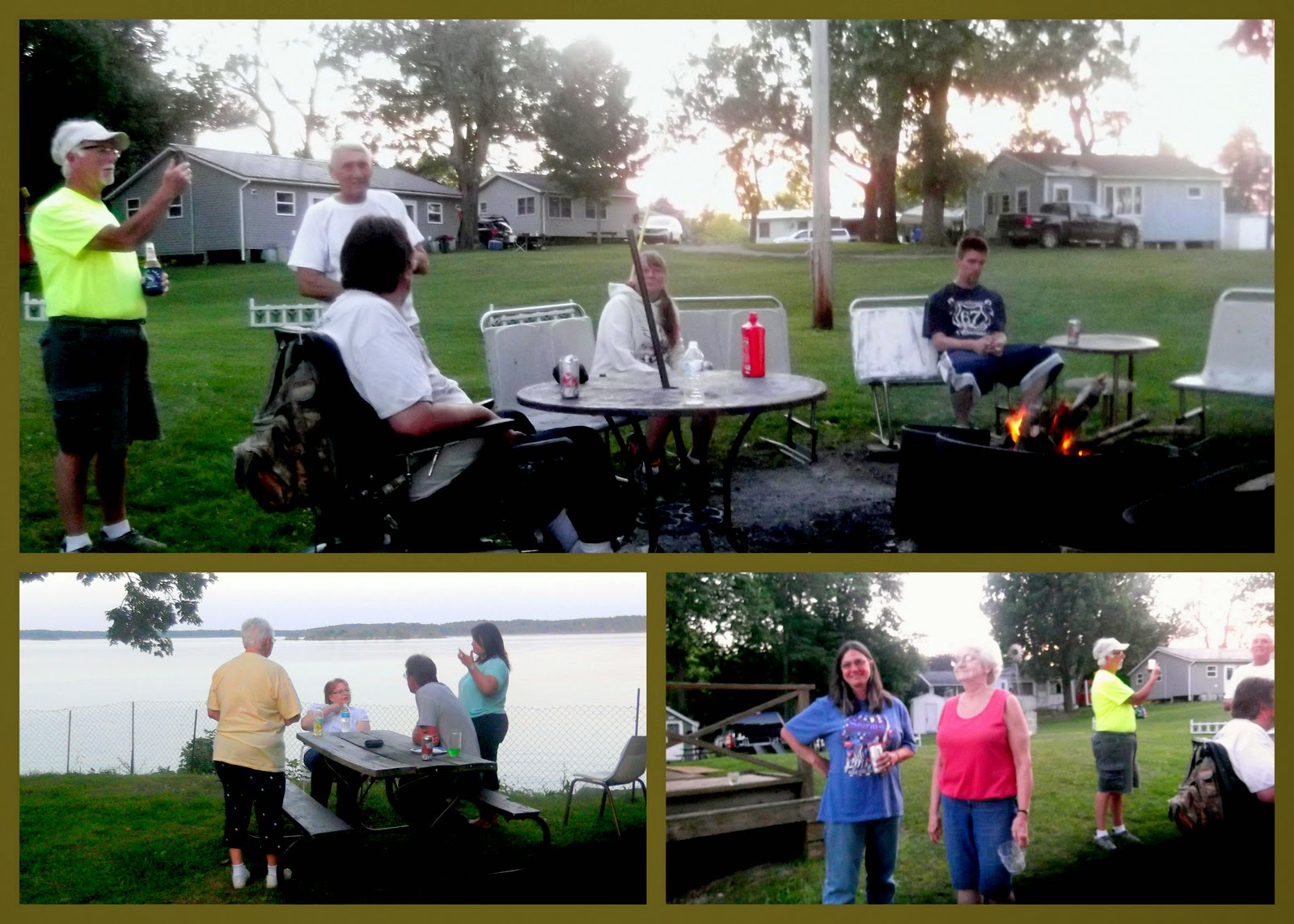 We decided that we were going out early Saturday morning.  The alarm was set for 5:25 am.  I was up a little earlier and caught the sun starting to come up , and then  when the alarm went off - it had already come up. 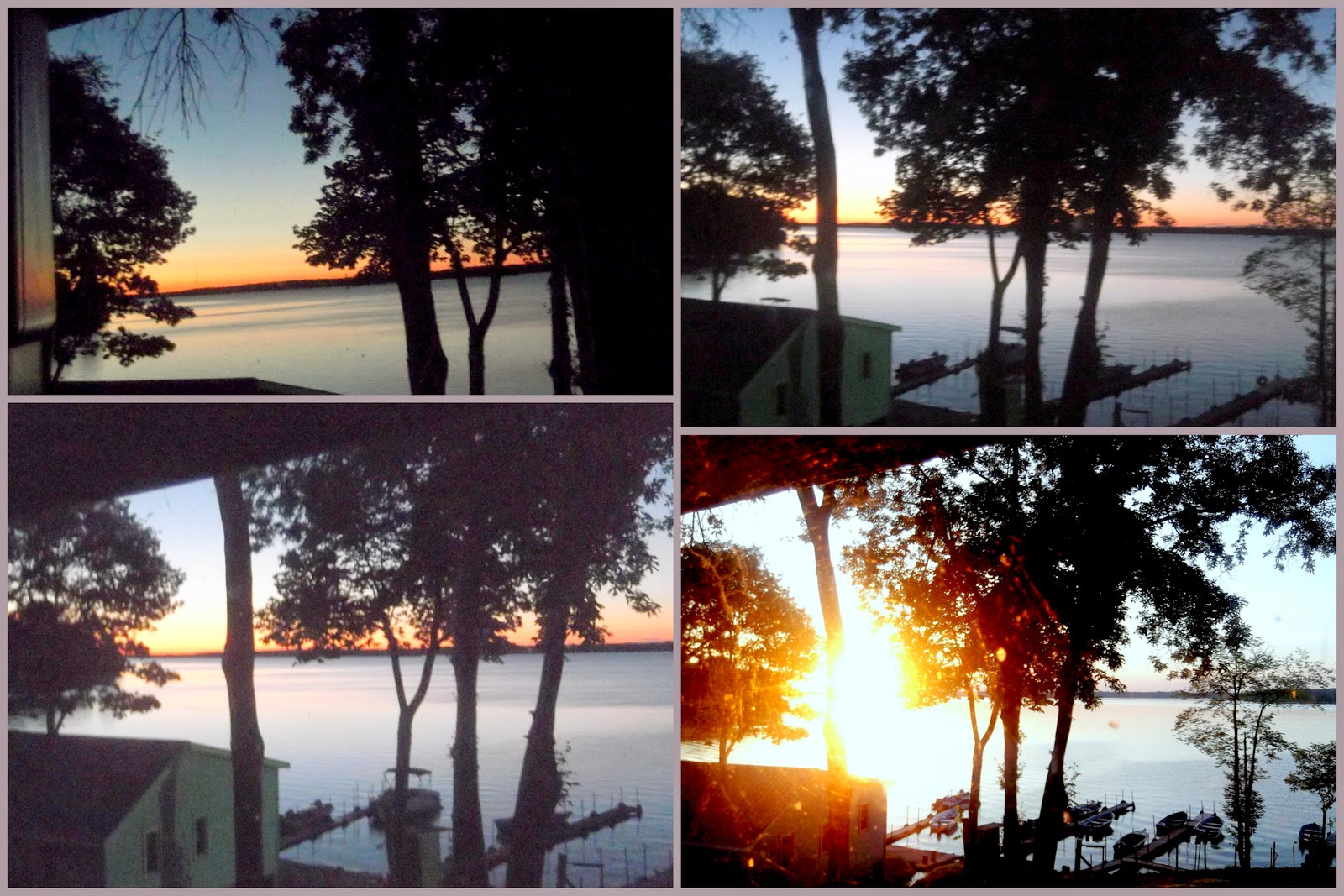 We were headed out before 6:00 am.  Finished the rest of the minnows and then did some drift fishing with jigs.  To start week three, I caught 2 nice crappie.  But Rich was the show-off today.  He pulled in a Dog Fish that had to go 20 or more inches.    Nice fish to catch - but not to eat! 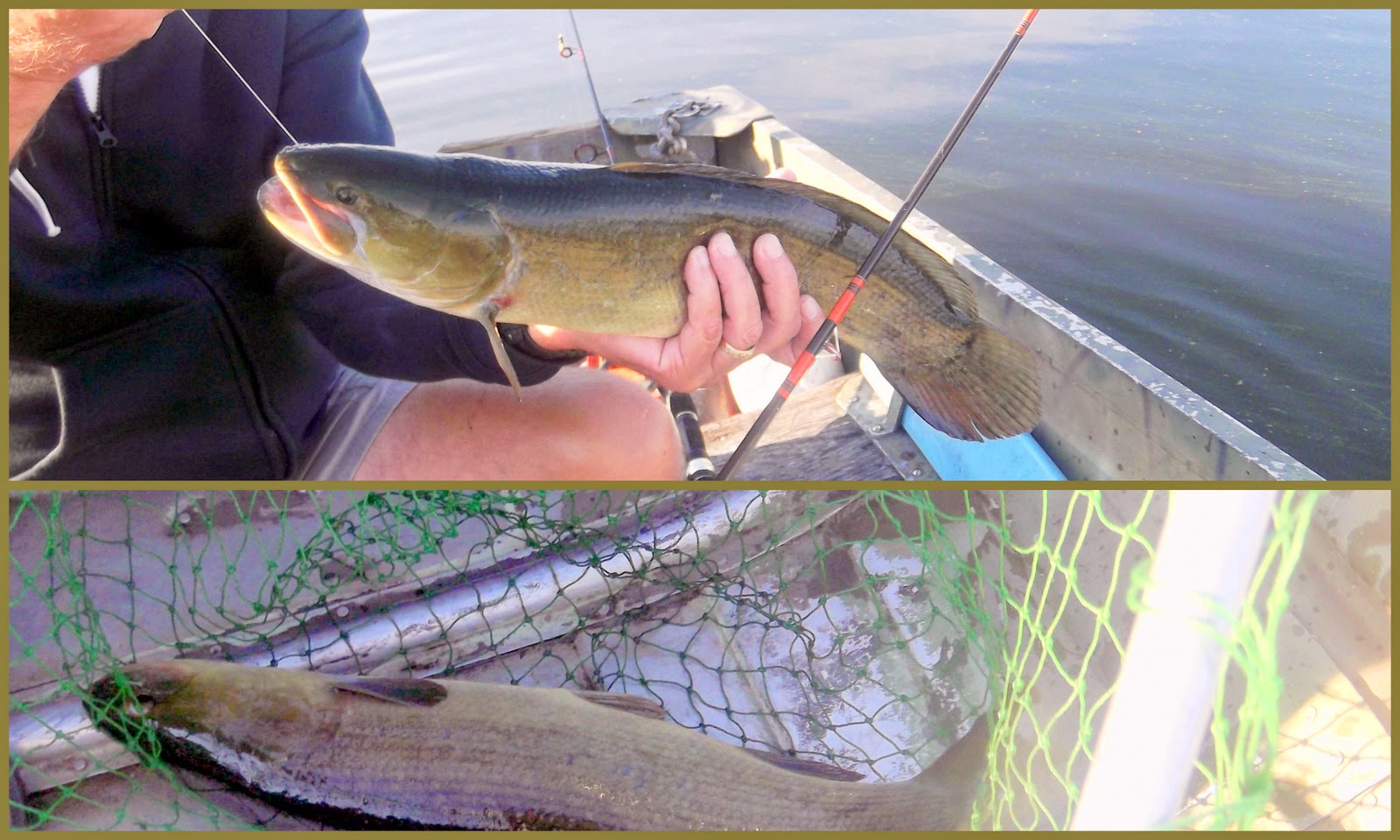